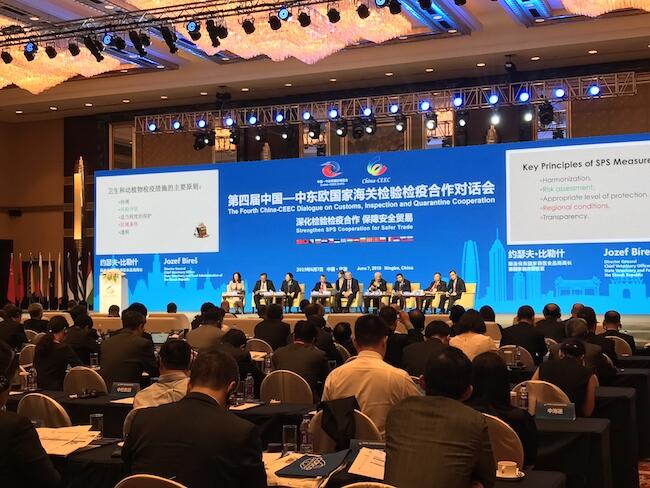 On June 7, the fourth China-CEEC Customs Inspection and Quarantine Dialogue was held in Ningbo, Zhejiang Province.

Wang Lingjun, deputy director of General Administration of Customs, Sun Wenkang, a chief quality engineer, Zheng Zhajie, deputy secretary of Zhejiang Provincial CPC Committee and secretary of Ningbo Municipal CPC Committee, Tomislav Tolušić, Vice Prime Minister and Minister of Agriculture of Croatia attended the meeting and delivered a speech. The Dialogue was attended by more than 150 Chinese and foreign guests from customs, inspection and quarantine institutions of twelve CEECs, one observer country and one specially invited country and Chinese and foreign enterprises.

Wang Lingjun pointed out China-CEEC cooperation is an important part of the BRI cooperation. The customs inspection and quarantine cooperation is an important condition for the smooth trading of BRI related countries. With a theme of “Deepening the mutually beneficiary partnership between customs and enterprises”, the Dialogue aims to deepen the customs inspection and quarantine cooperation, customs and enterprise cooperation, trade security and facilitation cooperation between China and the CEECs along the Belt and Road, build a platform for each concerned party to interact in policy, inter-connect in technology and mutually promote their ability, jointly promote the cross-border trade security and facilitation of China and the CEECs and the countries along the Belt and Road and establish a “new model” for the friendly cooperation between China and the CEECs.

Zheng said that the Dialogue will launch exchanges and negotiations on deepening customs service cooperation, guaranteeing trade security, and improving the business environment, with an aim to enhance the business development and promote the cross-border trade security and facilitation, which is consistent with the actions taken by Ningbo City of Zhejiang to serve enterprises, the people and the grassroots, which is set to bring new opportunities to the enterprises of Zhejiang and Ningbo.

During the event, the attending representatives expressed their opinions freely on two topics, “Deepening inspection and quarantine cooperation, guaranteeing security trade” and “Building a partnership between customs and enterprises, improving the cross-border trade environment”. The representatives unanimously agreed that it is meaningful to create an internationally first-class business environment to facilitate cross-border trade, optimize supervisory service and cut the costs of enterprises.

The China-CEEC cooperation is a typical example of cross-regional and multilateral cooperation under the background of globalization, which is successful because of their similarity and complementarity in economic development and consistent with the trend of economic globalization and trade liberalization. Under the China-CEEC cooperation framework, China Customs and the customs and inspection & quarantine departments of the CEECs have launched active and pragmatic cooperation to improve the communication and coordination mechanism of the customs for inspection and quarantine issues. The import and export between China and the CEECs have grown steadily. In 2018, the trade between the two sides grew 21% from 2017 and grew 55.4% from 2011 to reach 82.2 billion USD. Particularly, the import of China from CEECs has grown rapidly, up 87.7% compared with that in 2011.

In terms of customs cooperation, China has signed a bilateral administrative support agreement with the customs of countries such as Czech Republic, Slovakia, Hungary and Romania, signed a 1+3 customs cooperation framework agreement with Hungary, Macedonia and Serbia and reached a bilateral cooperation arrangement on customs clearance facilitation with Poland, Czech Republic and Slovakia. Each party has studied and promoted the cooperation in customs clearance facilitation around major projects such as China-Europe trains and China-Europe continent-ocean express and facilitated the development of China-Europe multi-modal transport.

Under the China-Europe cooperation framework, China Customs has also cooperated with the EU members among the CEECs in mutual recognition of “Authorized Economic Operators”, intellectual property protection and anti-fraud, having taken the initiative to create a fair and efficient customs clearance environment. In terms of inspection and quarantine cooperation, China has successively held three inspection and quarantine cooperation dialogues and established a Three-year Action Plan (2018-2020) for Customs Inspection and Quarantine Cooperation between China and CEECs. Both sides have accelerated the negotiations on the introduction of foods and agricultural products into China from the CEECs. China has reached fifty-one agreements on the introduction of foods and agricultural products into China with thirteen CEECs and signed twenty-one cooperation documents on animal and plant quarantine and imported and exported food safety with eleven CEECs, thus having established a long-term and efficient consultation mechanism.

China Customs will work with the customs of CEECs to adopt efficient and pragmatic measures, strengthen security guarantee, build open and smooth channels, expand the market access and promote the China-CEEC economic and trade cooperation to a new height.