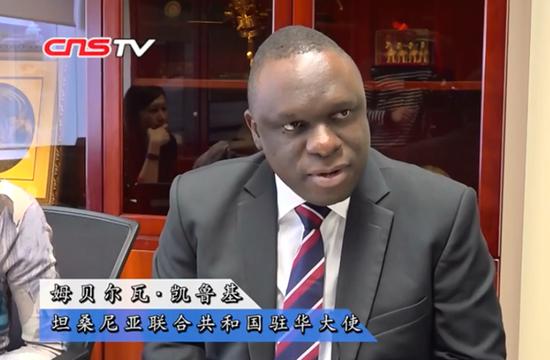 at Hong Kong Polytechnic University on June 18, 2019. Photo/Screenshot on CNSTV)

In an exclusive interview with China News Agency on Tuesday, the ambassador said Tanzania and China have cooperated in various fields such as policy coordination, infrastructure, trade and people-to-people exchanges.

He was attending the opening ceremony of the Tanzania Leadership Programme at Hong Kong Polytechnic University, an initiative designed to nurture professionals from the Belt and Road region.

Karruki said the two countries have good chemistry in cooperation as they maintain talks on economic, political and social problems. "Our two countries share common interests and we support each other on issues of mutual concern," he noted.

Karruki added that both the central government and local authorities in Tanzania have participated in or supported the Belt and Road Initiative to varying degrees.

China plays a very important role in infrastructure projects in Tanzania, with many Chinese companies and experts involved in the construction of railways, roads, airports and bridges, said Karuki.

The Belt and Road Initiative has benefited Tanzania both in hard power such as infrastructure and in soft power to build capacity in medical fields.

China has helped build a heart treatment hospital in Tanzania, ending the country’s history of transferring patients to seek treatment in other countries, saving $15 million annually, it was added.

Karruki said it's encouraging to see more and more young people from both countries joining bilateral exchanges. In 2018, the country had about 5,000 students studying in China.