At 8 o'clock in the morning, Zhou Weiliang, the 57-year-old deputy station director of Qiaosi Cangqian Station of China Railway Shanghai Bureau Group Co., Ltd. arrived at the office early and looked at the operation plan for the day. Outside the window, the construction site of Hangzhou West Railway Station is in full swing. It will soon become an important transportation hub integrating high-speed rail, subway, airport express, public transportation, and long-distance bus in western Hangzhou during the Asian Games.

Outside the wall of the construction site, an inconspicuous small blue-gray building with "Cangqian Station" in golden characters, and the empty old Xuanhang Railway in front of it have become a lonely background.

the sign of Cangqian Station on December 8, photographed by Wu Chongyuan

This old railway station, which was completed and opened in January 1972, was once the only place from Hangzhou to Huzhou, Changxing, and even Hefei, Zhengzhou, Xi'an, and other places. It has witnessed its glory and experienced desolation. With the advancement of the Hangzhou West Railway Station's comprehensive transportation hub project, Cangqian Station and the old Xuanhang Railway that accompanied it has also reached the time to "retire".

According to the plan of the railway department, from 18:00 on December 10, 2020, the old Xuanhang line (Xinggongtang to Cangqian section) will be officially closed, and by the end of the month, the Cangqian to Deqing West section will also see its final closure. Cangqian Station and the nearby small stations such as Shilai and Shabai will become history.

In May 1996, Zhou retired and entered the railway system and was assigned to the Cangqian Railway Station as an assistant duty officer. This railway station is an intermediate station on the old Xuanhang Railway. It was opened to traffic in January 1972 with the completion of the Hangzhou-Changniu Railway (Hangzhou-Changxing-Niutoushan, the predecessor of the Zhejiang section of the Xuanhang Railway).

The station is only two miles away from home. It is very convenient for him to commute. Zhou stayed here for 24 years, witnessed the rise and fall of this place.

More than twenty years ago, Cangqian Station was surrounded by rural areas, but the small station was very lively. "The small railway station has a whole set of staff such as crossing staff, attendants on duty, chief and deputy station masters, assistant attendants on duty, movers, shunting officers, and so on. There are two stock lanes and a 513-meter cargo loading and unloading line. Ceramic tiles, ore from Fuyang and Lin'an, as well as some local raw bamboo are sent from the station to all parts of the country."

"At most, there are more than 500 trains arriving at Cangqian Station in a month, and about 300 trains are loading and departing. In northern Zhejiang, except for Changxing Meishan Station, the second place should be taken by Cangqian. "

Not only that, but Cangqian Station is also an important station for small-town people to enter the city. The reporter found a train timetable from 1995. It can be seen that there are passenger trains destined for Huzhou, Changxing, and Hangzhou City Stations at the Cangqian Railway Station. "At that time, Cangqian Station had four green carts a day to Hangzhou City Station and Niutou Mountain. Vegetable farmers in the town went to the city to sell vegetables and purchase goods. In addition to taking long-distance buses to Wulin Gate, taking trains to Hangzhou City Station or Genshan Gate is also a good choice."

With the continuous development of society and more trains, Cangqian Station reached its peak in 2001. "There are 86 trains stopping and passing through the station a day. The capacity of the single-track railway is almost saturated. Even the two opposing trains have to line up and pass through. For this reason, the railway department built a new Hongtong station, which opened in October 2001." 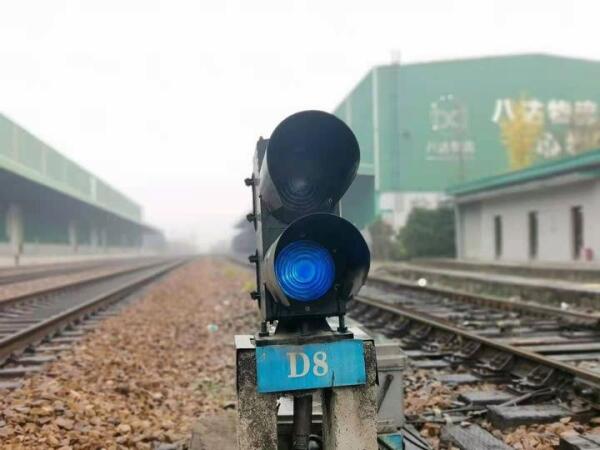 the last train about to arrive at Cangqian Station will soon on December 8, photographed by Wu Chongyuan

Zhang Jianchun, a 50-year-old from Deqing, is the crossing foreman of the Deqing line workshop of the Hangzhou Engineering Section of China Railway Shanghai Bureau Group Co., Ltd., and he is in charge of all crossing equipment within the old Xuanhang Railway.

As a railwayman who has worked on the old Xuanhang line for nearly 30 years, Zhang Jianchun has sprinkled all his youth on this 1435 mm wide rail.

On his first day, Zhang took the train to Cangqian Station, then took the bus for more than an hour, and then walked for a long time along a muddy lane, and finally came to the work area by railway.

"At that time, around Cangqian are fields and villages. Now when the weather is good, you can see the high-rise buildings of the future technology city. The development is so rapid." 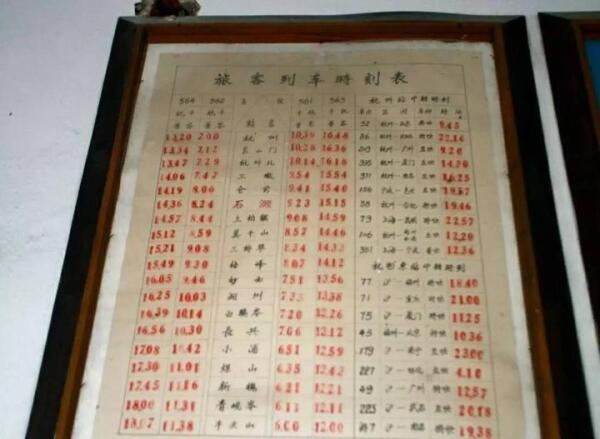 train timetable from 1995, photographed by Wu Chongyuan in 2012

With the construction of Hangzhou West Railway Station and the Huhang High-speed Railway, the Cangqian Station and the neighboring Old Xuanhang Line that accompany it have reached their end. Zhou Weiliang said that since the epidemic this year, the cargo volume at Cangqian Station has not been high, and the staffing has been reduced by more than half compared with its peak.

A few days ago, after the news of the station closure came, the employees have been diverted to several other railway stations in downtown Hangzhou, and Zhou Weiliang, who is the "old Cangqian", will continue to "stay behind" with the station chief Xiang Zhongqiang. "This section of the old railway may be used as a temporary access road for the transportation of large-scale construction machinery and equipment, making the final contribution to the construction of Hangzhou West Railway Station."

According to the plan of the railway department, on the afternoon of December 9, the last train will depart from Cangqian Station and head towards the terminal station.

Hangzhou West Railway Station, which is under construction, is a "large-scale comprehensive transportation hub" integrating railways, rail transit, long-distance passenger transportation, public transportation, taxis, and other vehicles. It connects the Hunan-Hangzhou high-speed railway under construction and the planned Hangzhou-Linji high-speed railway and Huzhahang railway. There are 11 platforms and 20 lines in the West Station, and the number of platforms is only slightly smaller than the current Hangzhou East Station. Unlike many domestic high-speed railway stations, Hangzhou West Railway Station put forward the overall design concept of "Cloud City" at the beginning of its design, integrating the station into the city and the city into the station, creating a super TOD with a high degree of integration between the two. According to the plan, the current Cangqian Station and the section of the Old Xuanhang Line are likely to be the location of the Hangzhou West Station Square in the future. Therefore, it will not be long before the demolition of old station buildings and old railways, which will continue to exist as a piece of history in photos and text.