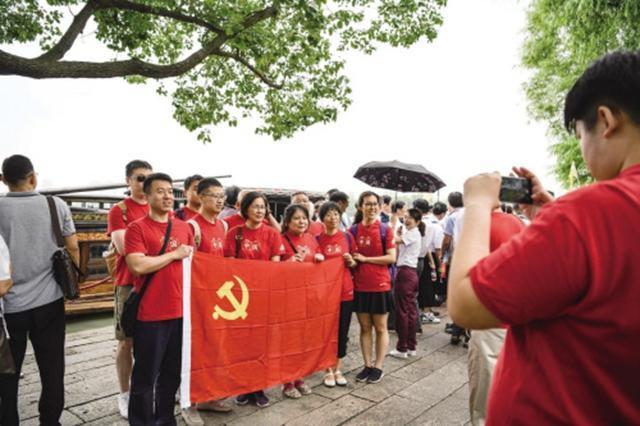 South Lake in the south of Jiaxing City, Zhejiang Province is one of the most famous lakes in the province where you can learn about the history of the Communist Party of China. As the July 1 Founding Day celebrating the formation of the CPC draws closer, finding parking lots on the roads near the lake is a bit difficult. Tourists from different corners of China with different accents were swarming into the place. Long queues are formed at the entrance to the Revolutionary Memorial Museum of South Lake...The busy season of red tourism has come.

Now group tourists account for nearly 80% of all tourists. This year, the number of students on a study tour and group tourists for education or training has increased distinctively. More than 10,000 person-times of tourists have participated in the “Revisiting the Site of the First CPC National Congress”, an increase of 15% compared with the same period last year.

This year, the experience of tourists has been improved. An obvious change is seen in the queuing time. During the peak time of last year, people had to queue up for more than one and half an hour, and this year the queuing time was shortened to around half an hour. Six operations ships have been newly purchased by the site. Taking safety factors and tourists’ experience into consideration, the museum adopted a one-way circulation of the visitor stream, which has reduced the traffic pressure.

Note: Red tourism (Chinese: 红色旅游) is a subset of tourism in China in which people visit locations with the significance of revolutionary history.