It can run more than 100 kilometers with a 4 kilowatt-hour charge, and can deliver up to 500 express delivery per day. The maximum speed of the robot is set to 20km/h, almost consistent with the speed of a normal electric car.

Alibaba launched the robot in order to improve the terminal logistics as it is “the most costly and least efficient part in the entire logistics system,” said Zhang Jianfeng, president of DAMO Academy.

“The demand for logistics is exploding rapidly. In the near future, China will generate 1 billion orders every day,” Zhang said.

He added that Xiaomanlv will first be widely used at Alibaba’s Cainiao logistics stations.

Alibaba explained that the donkey used to be the most commonly used animal for labor, transportation, travel, and cargo delivery for ancient Chinese people. Today, although people’s lives are becoming more cloud-based and digitized, the core demand for social operations has never changed. Therefore, Xiaomanlv can be a delivery tool in the digital era.

According to Chinese companies information provider Qichacha, Alibaba registered and established Xiaomanlv Intelligent Technology Company on April 20 this year to promote the development and mass production of robots.

Alibaba began to deploy in the field of logistics robots three years ago. In October 2017, the flagship robot warehouse launched by Cainiao Network was opened to the public for the first time, increasing work efficiency by 5-6 times compared with before, according to Cainiao.

In addition, Cainiao Networks has launched a robot that serves the last-mile delivery: Cainiao’s autonomous vehicle, which can automatically recognize its surroundings and avoid pedestrians. It is about 1 meter high and can carry 10 to 20 packages at a time. 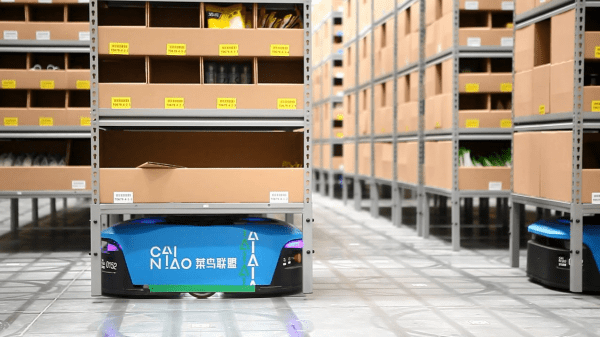 “Xiaomanlv will soon be used on a large scale in communities, schools, and office parks,” Zhang said.

The original article can be found at https://pandaily.com/alibaba-debuts-first-logistics-robot-for-more-efficient-last-mile-delivery/