"You can cook an omelet for your family in the early mornings of the weekend. Apply jam on it, rose or cherry flavor. My children like it very much." On the afternoon of June 9, Bulgaria's Commercial Consul in Shanghai, Wang Si, dressed in a bib, cooked delicious food and recommended jam from Bulgaria to thousands of netizens in the studio of Jiangbei Qianyang E-commercial Town in Ningbo. 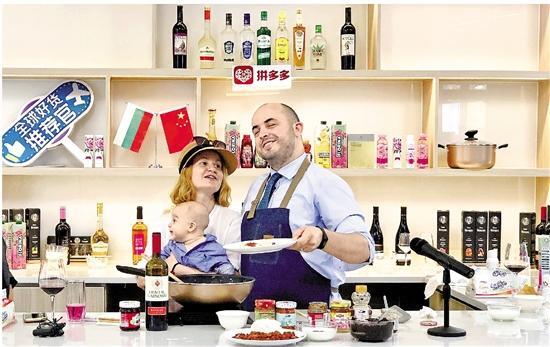 The 2020 Ningbo Investment and Trade CCFAIR kicked off this week with the launch of the Central and Eastern Europe Commodities Fair specially set up by Pingduoduo, a mainstream online shopping platform in China. From June 8 to 9, a group of ambassadors, consuls, and counselors from 10 countries in Central and Eastern Europe took turns to promote their own country's characteristic commodities in the studio.

Apart from selling commodities, diplomats from all countries spare no effort to recommend beautiful scenery and attract investment in the live broadcast. "The COVID-19 epidemic has impeded the distribution of good products. While selling products, live broadcast on network platform helps more Chinese people know Central and Eastern Europe." Bosnia-Herzegovina Ambassador to China Tariq Bukvic said, "Bosnia-Herzegovina has a population of 3.5 million. My half-an-hour live show gained me more than 500,000 audiences. That is exciting."

"In order to maintain the vitality of cooperation with Central and Eastern European countries, Ningbo also cooperates with e-commerce platforms such as Pingduoduo to launch full-channel promotion," a relevant official in charge of Ningbo Municipal Bureau of Commerce said. According to statistics, over 2 million people have watched the two-day live broadcast by diplomats.