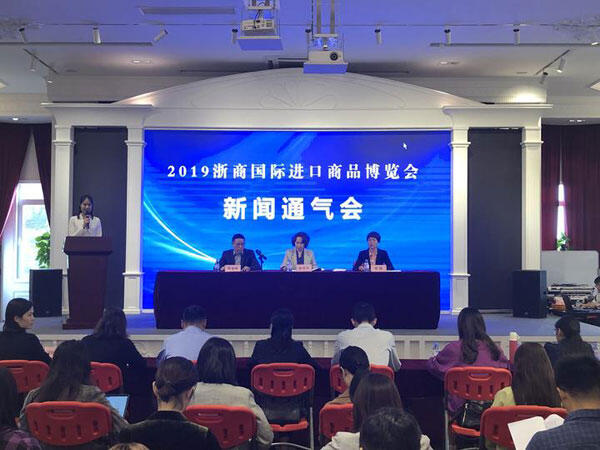 A news conference for the first Zhejiang Businessmen International Import Expo is held in Jiaxing, Zhejiang province on Oct 15. (Photo/zj.zjol.com)

The first Zhejiang Businessmen International Import Expo will be held in Jiaxing, Zhejiang province from Nov 15 to 17, according to a news conference held by organizers on Oct 15.

Hosted by the municipal government of Jiaxing, the expo will include an import goods exhibition and many supporting activities such as forums and an international cultural exhibition.

The import goods exhibition will take place in a 20,000-square-meter hall, where more than 500 exhibitors from 100 countries will display their goods at over 700 booths. Items on display will include food and beverages, toys, clothes and shoes, household supplies and handicrafts.

Directors of Zhejiang chambers of commerce in many places around the world will also be invited, among other important guests.

The expo is designed to serve as a communication platform for Zhejiang businessmen and academic scholars all over the world and will help to connect global suppliers with importers, said organizers.

The expo was inspired by the first China International Import Expo held in Shanghai last year, said Yu Danhong, a researcher from the Jiaxing department of commerce.

"Jiaxing had 1,163 companies attend the first CIIE, leading to deals worth more than $400 million in total," said Yu, "but we don't think it's enough for us to just have companies attend CIIE. We wanted to expand the spillover effect of the expo, so that's why we decided to hold the Zhejiang Businessmen International Import Expo."

Yu added that the expo is an important part of Jiaxing's efforts to strengthen its relationship with Shanghai and make full use of the resources provided by the Yangtze River Delta region, as well as to promote Jiaxing to the outside world.