Delegate Story | Che Feifei: The train has the destination, but my service is always on the road She was dressed in a capable uniform, with a mask covering most of her face, but the smile in her eyes still made people feel welcome, showing the excellent quality of the railroad worker.

Che Fei Fei has received numerous honours throughout her fourteen-year career. But the most important thing for her is now her new identity - a delegate to the 20th National Congress of the Communist Party of China.

"Whether a conductor or a delegate, what I need to do is to serve the people. The train has the destination, but my service is always on the road." Che Feifei said.

A kind sister when off duty, a leader when on duty

In the message book of the T112 train, a passenger's wish to Che Feifei is particularly eye-catching, "Touched by the sincere service of the conductor, the next time I take T112, I hope to meet you."

In 2008, Che Fei Fei became a train crew member with great expectations, working on the common slow train from Hangzhou to Lanzhou.

"At that time there was no high-speed rail in Hangzhou, the train took three days to run through a round trip." Che Fei Fei recalls that at that time, her daily work is to open and close the train door, sweep, mopping, the rest can only be in the carriage, and they are not allowed to get off the train.

Although the work is simple and boring, Che Feifei still carefully come up with a lot of new "tricks" - If a passenger happens to have a birthday that day, she will send a greeting card with sincere wishes to the passenger; try to remember the last name of each passenger, etc., so that the passengers feel more welcome.

Seeing the high-speed train crew on the road pulling suitcases and walking with their heads held high, Che Fei Fei immediately set the goal of becoming a train conductor.

In 2012, because of her outstanding performance, Che Feifei stood out in recruitment and officially became a high-speed train conductor in 2013. The working environment has made a qualitative leap, but her service requirements have become even stricter.

Because of her pursuit for perfection, After three years on the job, Che Feifei was elected to the crew of the "Xizi", a train named by the People's Government of Zhejiang Province with a glorious history of 34 years, which is famous for its high-quality service, and became the group leader. 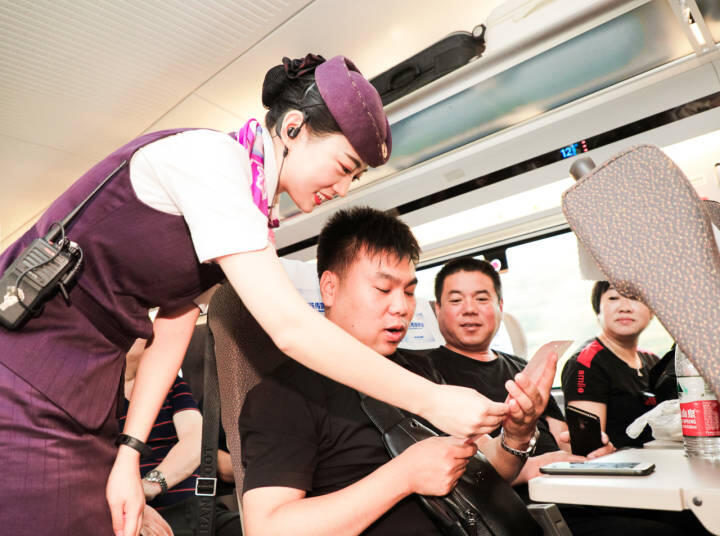 In the "Xizi" train, there is a treasure box placed in the corner all year round. Inside are crayons and picture books for children, presbyopic glasses for the elderly, and universal rechargeable batteries for young people. These are added by Che Feifei according to the needs of passengers, and this box is still in continuous filling.

To humanize the service, we must keep up with the trend of the times. As people's lives become more affluent, Che Feifei carefully found that the previous assortment of woven bags, and sacks, has been replaced with lightweight suitcases. This also caused a problem for the passengers - many suitcases are relatively similar in appearance, and careless travellers are prone to misidentify the wrong take.

After many comparisons and repeated practice with other crews, Che Feifei finally decided to use different colours of paper disposable bracelets, write the seat number on the bracelet and stick it on the passenger's suitcase, which greatly reduces the case of misplaced luggage.

Che Feifei has been thinking about how to better unite the drivers, mechanics, police, cleaning, cabin crew and other departments on the train to make the service work more smoothly. "We set up a Party branch for high-speed rail crew, and before each departure, we hold a meeting to lay out the key tasks."

Such a habit has greatly improved the crew's resilience in the face of unforeseen circumstances.

In August 2021, shortly after the departure of the G174 train, which was staffed by the "Xizi" crew, a woman suffered from sudden abdominal pain due to ectopic pregnancy. She insisted on going home and refused to receive treatment. Che Feifei did not get discouraged. She patiently persuaded the woman, called an ambulance and the woman's family, and successfully led the crew to get her off the train safely in the end.

"Although the crews involved in dealing with emergencies come from different units, the high-speed rail crew party branch makes us cohesive together and work closely with this work." Che Feifei said. 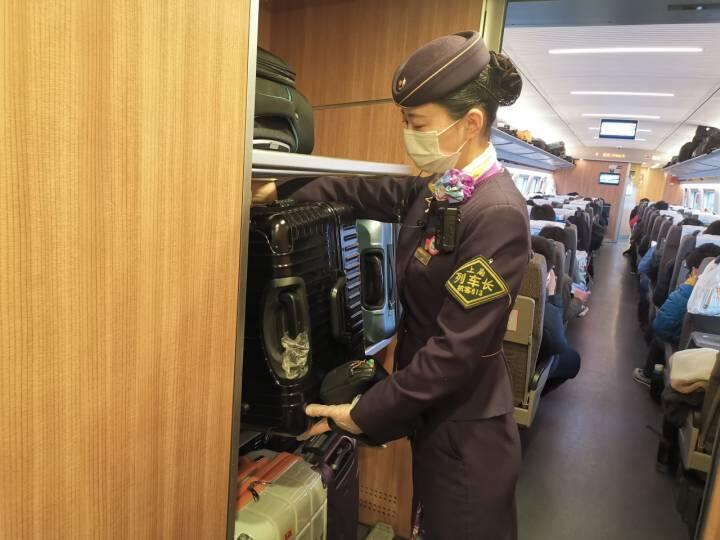 There is no end to perfecting yourself

This year, Che Feifei has newly become a mother, busy with a baby while busy returning to her post: "During this time, I often learn the latest work progress from my colleagues in the group, but theory and practical operation are ultimately different."

The best way to cope with uncertainty is to keep improving yourself. Not long ago, Che Feifei ended her maternity leave and rushed back to Hangzhou from Xuzhou, Jiangsu by train. Although Che Feifei was just an ordinary passenger at that time, she didn't stay idle for a moment, following her colleagues back and forth in the carriage, hoping she could change her identity and get used to working conditions as soon as possible.

Apart from her busy work, studying is also one of Che Feifei's top priorities, and that includes studying English.

"There are more and more foreigners on the train now." Che Feifei said that she had seen a group of Koreans in the carriage before, and their suitcases were not placed on the luggage rack in a standard way, which were easy to fall down in the bumps. But at that time, no one in the crew could speak Korean, and finally used a translator to get things sorted out.

"Next year's Asian Games will be held in Hangzhou. The high-speed rail is a great way to showcase Hangzhou's image. I have to study foreign languages well so that I can better serve the Asian Games."

When the reporter asked Che Feifei what she felt when she knew that she was elected as a delegate to the 20th National Congress of the Communist Party of China, she confessed that she was excited but more apprehensive.

Che Feifei also excitedly told the reporter that she has planned to bring four representative train models of the "Xizi", hoping to tell the story of the "Xizi" about the rapid development of China's railroad achievements to the delegates of the 20th National Congress across the country.