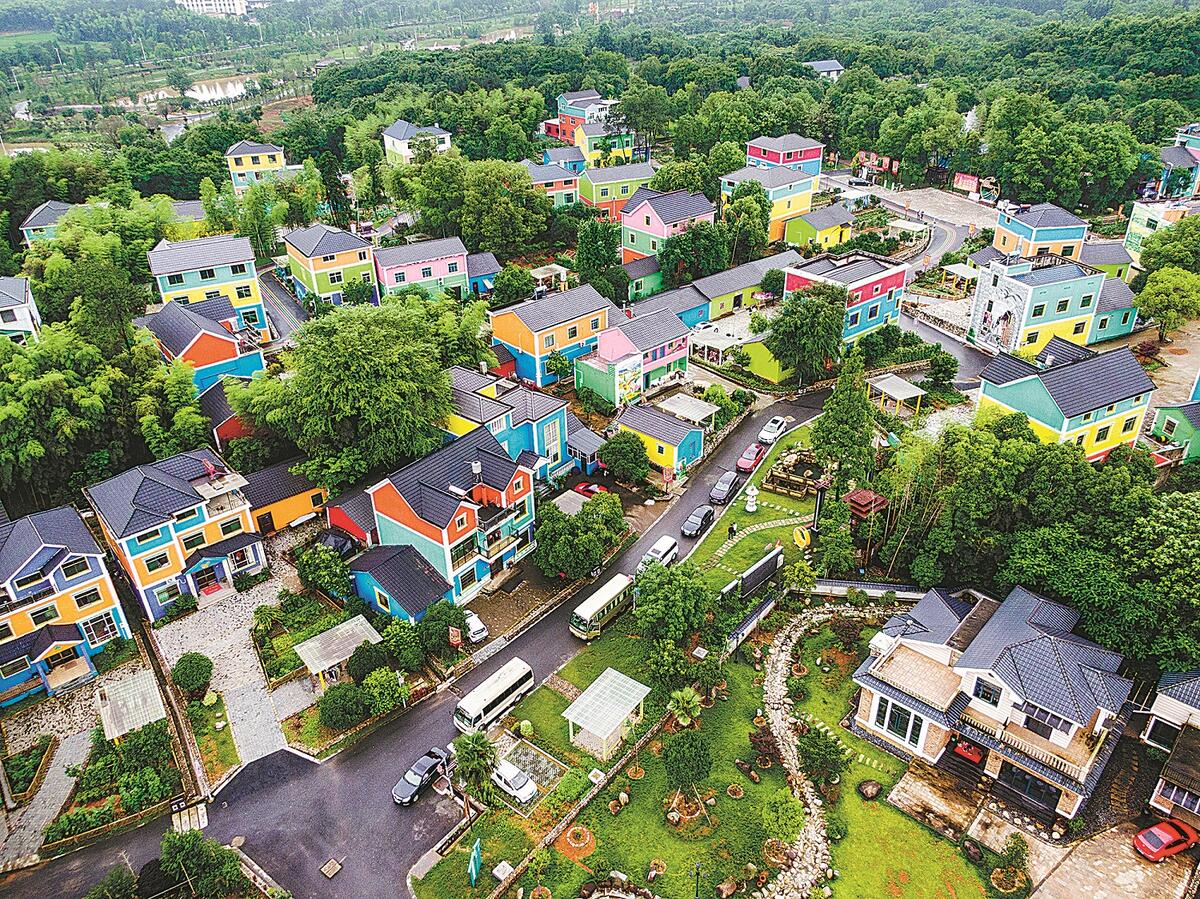 Zhong Feijun, 34, used to work in a furniture company, with daily commutes from his village to the city adding to the long hours. "Things are much better now with my current job. I've also bought a place near my hometown," he said.

Zhong is now a supervisor at the Dollor sewing machine production facility in Lishui, a city in East China's Zhejiang province.

He is also one of the rising numbers of Lishui's rural residents who have benefited from novel measures bringing together the latest development policies and private enterprise, to help fuel advanced and innovative economic and industrial practices ensuring more inclusive growth. 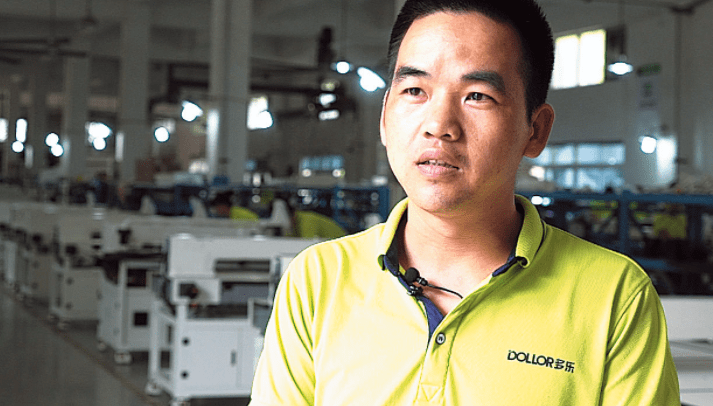 "I manage about 40 people in my team and also receive skills training myself at least four hours a month. I also have shares in the company, so we can all grow together," said Zhong, adding that, in his three years at the company, his annual income has doubled to at least 150,000 yuan ($23,500).

The 40,000-square-meter production facility in Lishui has an annual output of more than 200,000 units, and 70 percent of its 350 employees are local hires such as Zhong.

Wang Mingjian, Dollor's general manager, said that one of the ways that the company stays at the forefront of the sector is by giving its employees an important stake in its growth.

The company taps and builds on strong links with the neighboring coastal city of Taizhou, an industrial and private enterprise hub hosting leading companies, he said.

"We want to help take the local industry to the highest level, lifting everybody up by leveraging the right policies and incentives," Wang said.

The move is in line with a national effort to achieve common prosperity.

As one of China's developed provinces, Zhejiang has been designated as a demonstration zone of inclusive growth for the next major stages in the country's development.

The province aims to achieve common prosperity by 2035, with its per capita gross domestic product and the income of urban and rural residents reaching developed countries' standards.

In August, a meeting of the Central Committee for Financial and Economic Affairs, which was chaired by President Xi Jinping, who is also general secretary of the Communist Party of China Central Committee, outlined steps to promote common prosperity through high-quality growth, calling for a phased approach to reach the target.

With the drive for common prosperity expected to be long-term and comprehensive, the country is set to pursue it in a gradual and progressive manner, with suitable areas offering replicable practices and models.

Zhejiang has a population of about 65 million and boasts top enterprises led by the private sector. The latest plan allows it to show how the nation can tackle unbalanced and inadequate development.

As a key indicator of balanced development, the income ratio between urban and rural residents in Zhejiang fell to 1.96:1 last year, significantly lower than the national level, according to provincial authorities.

Technology has also helped in terms of poverty reduction, public services, and grassroots governance, playing a vital role in improving people's livelihoods, with Zhejiang nurturing a market-oriented, law-based, and internationalized business environment by tapping advances like digitalization, its officials said.

In the Liandu district of Lishui, major Shanhai projects are rolling out to allow the industrial prowess, logistics networks, and entrepreneurial know-how of provincial economic hubs such as Yiwu and Ningbo to fuel infrastructure and other development work.

The Liandu-Yiwu Shanghai Cooperation Industrial Park covers more than 4 square kilometers. It hosts over 200 enterprises, including more than 30 national and provincial-level high-tech companies and research and development center facilities. The area has attracted over 8.5 billion yuan in infrastructure and corporate investment, and more than 18 billion yuan in contractual investment.

In Liandu, a new livestock and poultry industry chain intelligent project of meat and agricultural group Huatong touted as the largest of its kind in Lishui with a total investment of 750 million yuan, boasts automated and computerized production and environmental control facilities such as intelligent feeding, fermentation and sewage treatment systems. 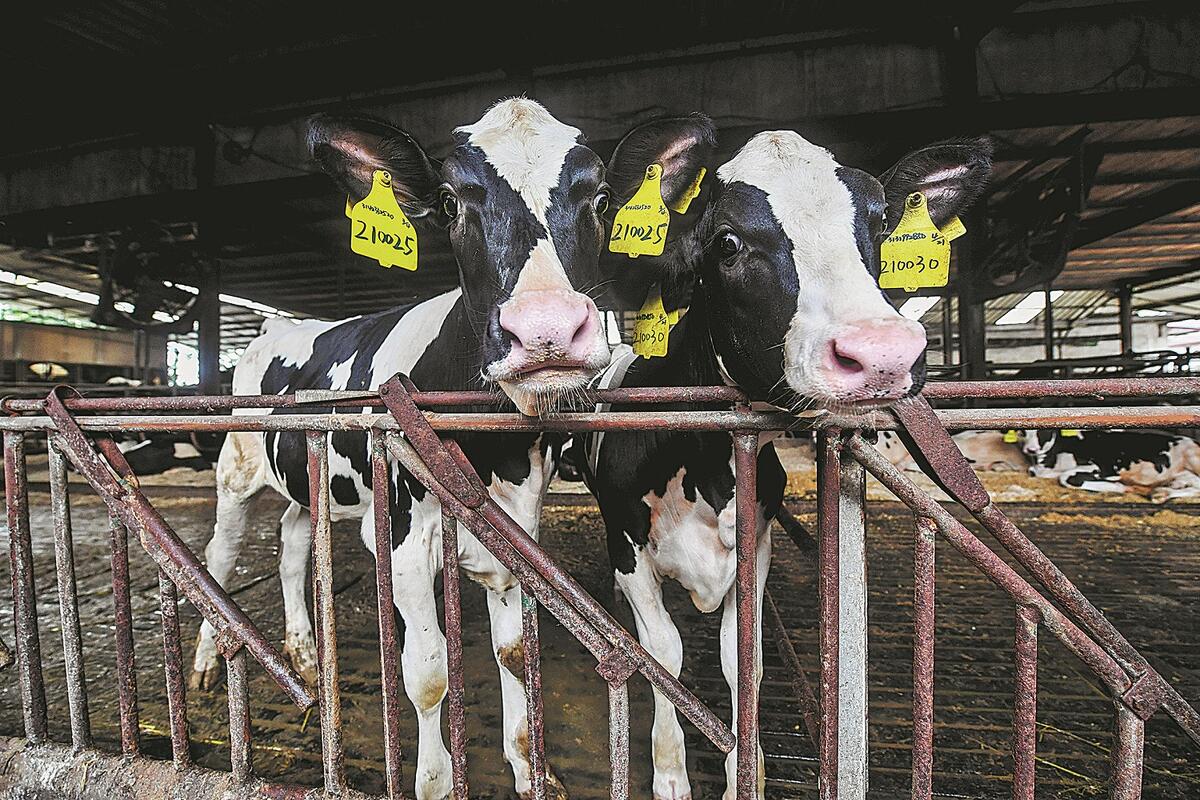 Six-month-old calves are among the livestock at a dairy farm in Jiaxing, Zhejiang. The dairy farm is one of the local demonstration projects. (Photo/Xinhua)

Its annual production scale of 200,000 commercial hogs, and abattoir capacity for 500,000 swine, 3 million poultry, and 5,000 metric tons of deep-processing meat products are expected to "greatly promote the increase in production and supply of live pigs and the high-quality development of animal husbandry", according to local authorities.

Huatong group's facility in the Bihu area of Lishui's Liandu district has more than 70 employees processing up to 300 pigs a day in line with global environmental management standards.

Wu Fei, the head of the livestock and poultry industry chain intelligent project department in Liandu, said the investment from Yiwu matches industry knowledge with Lishui's natural advantages and resources.

"We identified the area's strengths and suitability through in-depth research beginning in 2018, partnering with local stakeholders through land-use arrangements, skills transfer, and jobs to help lift its economy together," he said.

The Huatong project is a leading example of Shanhai cooperation in Lishui's pillar agricultural industries, with its results and experience able to expand to other areas, said Wang Haitao, head of the local livestock and health section of the agricultural-rural animal husbandry and veterinary development center.

"From feeding to breeding and fresh meat to processed products, we're able to put in place a complete production chain here to supply markets and fully realize the potential of the industry," he said.

The project provides advanced industrial expertise such as logistics links that are able to fully cater to specific and changing consumer needs, such as meats with different fat content, said Jiang Lin, who heads the integrated management section of Lishui's main industrial park.

"We've also introduced all the necessary hygiene, sanitation, and disease prevention protocols and practices, which are all up to the latest industry standards," Jiang said.

Li Shun, section chief of economic development under the industrial park's management committee, said, "From equipment manufacturing to food processing, we're continuing to open up and attract growth industries that build on our strengths."

"Looking ahead to sectors like high-tech, all these will have a very positive impact on our economy and bring real benefits to our communities," Li said. 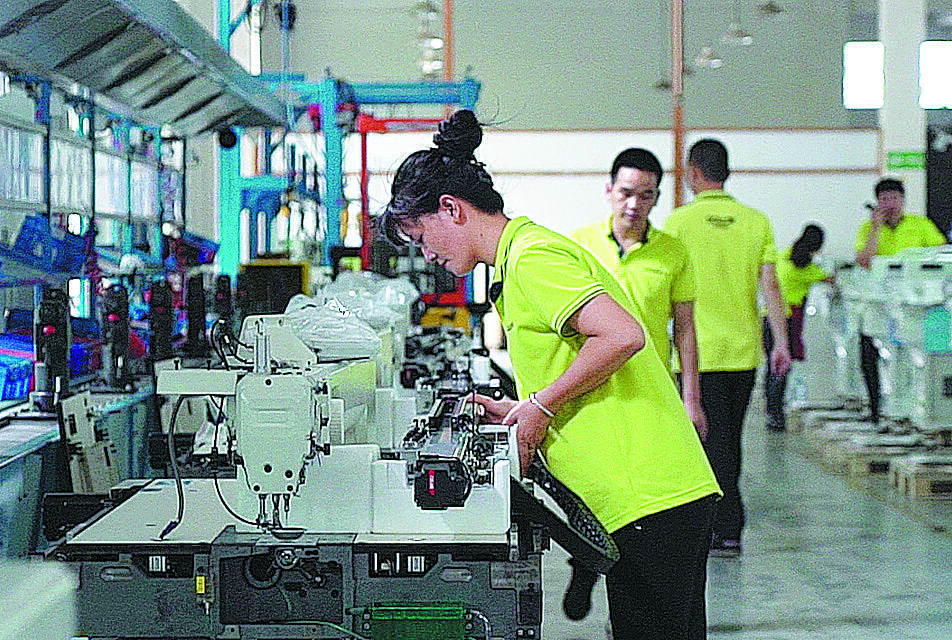 A woman operates a sewing machine at the Dollor production facility in Lishui, Zhejiang. (Photo/China Daily)

Yiwu, known as a global small commodities trading hub, is also lending its strengths in manufacturing and logistics to fuel the development of Liandu's arts, crafts, cultural and creative products industries.

Involving stationery, toys, sporting goods, textile, souvenirs, and artwork, the partnerships cover more than 2,500 product categories, over 300 major enterprises, and a sales volume of 150 million units in a single year, with exports to over 30 countries and regions.

Zhao Guifeng, manager of the Yiwu-Liandu Shanhai Collaborative Art Exchange Center, which showcases the areas' projects and products, said the partnerships help promote Lishui's cultural and scenic attractions at home and abroad, such as its local ethnic and artistic communities located amid pristine mountains and clear waterways.

"We effectively match Yiwu's manufacturing strengths with our artists' work on creative and cultural products. Yiwu's global platforms, such as its involvement in commodity fairs, help to showcase local products, artists, and artisans," Zhao said.

In western Zhejiang's Quzhou, the city's food and farming industries are also tapping the economic strengths of the province's coastal and urban centers, such as the major port city of Ningbo.

Hu Fangjun, 37, was a homemaker before she found work as a shop manager at the Heron Ranch dairy farm and ecotourism attraction in Quzhou's Qujiang district.

"I had to rely on my husband's income. But I've since learned a lot in the three years here. I have received training in production and sales, all from scratch, and I have trained others as well," said Hu, who makes at least 4,000 yuan a month.

The ranch－which has about 1,000 head of imported cattle that can each yield 40 liters of milk a day－covers 80 hectares and has more than 120 staff members, who are mostly local residents, such as Hu.

Ruan Guohong left Ningbo five years ago to return to his hometown, setting up the farm with his three decades of industry know-how, modern management capabilities, and business networks.

"I wanted to use the latest green development methods here, in line with the policies to grow the local economy via its environment. We know that water quality is integral in this industry, and Quzhou's advantages are clear in that regard," said Ruan, who is eyeing the expansion of his business in order to give even more residents a stake in the growth of the industry.

The farm's sustainable practices have also helped transform the grounds of the dairy farm into a highly profitable scenic spot, he said.

Sa Guoyuan, the local village Party secretary, said more than 80 households have been involved in an arrangement that uses their land for Heron's purposes, bringing in yields of at least 500 yuan a year per 0.067-hectare plot on top of their wages from the company.

"The improvements are here for all to see," he said, pointing out that many thousands of visitors arrive at the farm every year to enjoy its "green grass and clear streams", and that this has raised the profile of the entire village.

Zheng Xiaoyun, head of the collaboration section at the Center for Economic and Technical Collaboration in Qujiang district, said the success of Shanhai projects such as the Heron Ranch reflects the crucial exchange of talent, resources, and technology, contributing to overall socio-economic development.

"We're planting the seeds of development and it takes time. We are working together, knowing that the resources are for everyone," she said.

Hu, the shop manager, said: "Working makes me happy. There's still a lot for us to learn and we're all looking forward to it."