Life in Zhejiang | Ten years on, the 'Mythical Bird' and its guardians

Every May, Chinese crested terns would arrive in the Mid Tiedun islet. In the following four months, they mate, breed, and hatch the next generation.

This islet, 25 km east of Xiangshan county of Zhejiang province, is now the world's largest breeding base of Chinese crested tern.

Chinese crested tern is a critically endangered species with less than 150 adult individuals worldwide. For 63 years, the bird was thought extinct.

It was not until 2000 that a photographer accidentally discovered four pairs in a great crested tern colony in the Matsu Islands.

With its sudden comeback, people referred to it as the "mythical bird". When August ends, Ding Peng headed for the islet, checking the final number of Chinese crested terns that have been born there this year.

Ding, born and raised in Northwest China, has been guarding the precious bird species on this islet thousands of kilometers away from his home for 10 years.

His job is to help the Chinese crested terns build a stable and safe breeding base by social attracting method, observe and record their habits.

"The project was launched in 2013. There was no fund and no personnel, only an American volunteer and I," said Ding, recalling the beginning of this project.

The basic theory of social attraction is to settle fake birds on the island and play the mating chirps of the birds to attract real Chinese crested terns to come and breed.

Ding and the American volunteer lived on a nearby islet and observed through a telescope every day, but no bird came, not until July 18.

"I still remember that day clearly. We decided to call it a year and I was on the islet to fetch the facilities. Over 50 great crested terns suddenly appeared, and their appearance was regarded as a sign of the coming of Chinese crested terns," said Ding.

Ding decided to stay on, and his excitement came to a highlight when he came back to the islet with supplies, seeing thousands of crested terns hovering.

"I came from an inland province, and that scene, thousands of birds flying around the islet just astonished me. For that moment, I knew all my efforts were rewarding," he said.

In the first few years, he was one of the only two people on the islet.

In 2014, he moved his tent to the Mid Tiedun islet, getting closer to the birds. In 2016, a portable room was built to replace the tent, which was donated by an NGO from the US, and originally used in Alaska.

"There was limited electricity and for most of the time we only had potatoes and pumpkins for food, but these were not the biggest problem," said Ding. "The killing part is loneliness."

After the facilities were settled, the only thing Ding and his companion needed to do was to wait, wait for the birds to come.

"There was not much to do but wait anxiously. And that was really lonely," he said. "When night fell, you could see the coastline of the mainland clearly, as well as the lights of families there. But the bustling scene did not belong to you." 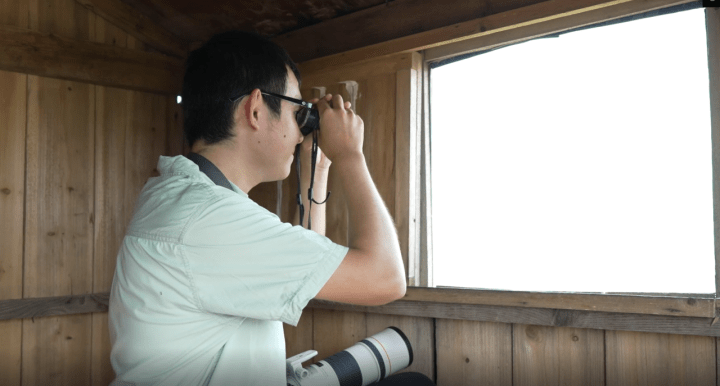 With the coming of volunteers in 2017, Ding was no longer a lonely guardian. By this year, a total of 26 volunteers have finished their shifts on the islet.

The volunteers, nature lovers with abundant professional knowledge of birds and photography, will serve two months on the islet.

They observe the birds for six hours a day, count the numbers, take pictures and notes down and write daily reports.

"Wake up with ocean billows and bird chirps", the recruitment advertisement describes the voluntary work on the islet as the most poetic on earth.

In reality, the islet is less than 300 meters in length and there are only three portable rooms and an outdoor platform for them to live with, and there is no shower room.

Freshwater is bought by a supply boat, and stored in two water tanks. Vegetables and three chickens are kept to prevent a lack of supplies. When typhoon season comes, the supply boat will not be able to reach the islet.

Electricity is generated by solar panels, and most importantly for modern people, there will be no access to the internet after 8 pm.

But the volunteers can always soothe themselves with the love and enthusiasm of nature.

This year's volunteers, Chen Peitao and He Jibai are in their 20s. Both Chen and He describe themselves as "crazy" enthusiast of birds and nature.

"The more I watch the birds, the more eager I become in attempting to protect them," said Chen, a postgraduate student at Sun Yat-sen University, majoring in biology.

"I'm happy simply because I can see these beautiful birds with my own eyes and participate in the project to protect them," he said.

For He, who used to work in a wildlife protecting organization in Southwest China’s Sichuan, the pleasure of this voluntary work lies in every day.

"Simple as it is, I can still find new excitement every day because I never know what kinds of new discoveries I will encounter tomorrow," said He. "Sometimes it is a new species of bird and sometimes it would be a tortoise that was never seen in this area."

The voluntary work, of course, does not merely provide personal satisfaction to the volunteers.

The data the volunteers collected will be sent to the research organization for further study and more scientific protection plans will be worked out with these data.

"There are a lot of details that only can collect by daily observation," said He. "For example, a few days ago, we noticed that the crested terns flew to the islet from the south, but they normally came from the east. That was because there were several peregrine falcons waiting on the east end. This could not be explained if we were not on the islet 24 hours a day."

Both Chen and He are planning to apply for next year's position. Over the past 10 years, more than 120 Chinese crested terns were born on the islet, accounting for almost 80 percent of the world's total.

For Ding, the target of this project is never to make this islet the world's largest breeding base of Chinese crested terns.

"I hope the birds bred here can fly to as many inhabitants as possible, so that more people can have the opportunity to observe them in places nearby and get to know this beautiful bird," he said.

Public attention on Chinese crested terns was not raised till recent years.

"For a very long time, I knew I was doing meaningful work, but that was all. Almost nobody knows about Chinese crested terns and they did not understand why we spent so much on protecting a kind of seabird," said Ding.

It was in 2017 when the project recruited the first batch of volunteers and a doctoral candidate from an overseas university was selected.

"Media came in and suddenly the project was brought under the spotlight," he said.

The year 2017 was also the year when the notion of ecological protection was brought up nationwide.

On the small islet of Mid Tiedun, efforts have also been made to educate the public.

The volunteers, apart from their daily routine, also have to undertake promotional tasks during their shifts. Each of them needs to write four articles, either about their life on the islet or about the new discoveries they find. The articles will be published on social network platforms so that more people can be reached.

"The protection job is a matter of people. The social value of our work is to publicize the concept of protecting nature," said He.

Relieved from daily observation work, Ding devotes more of his time and energy to luring more public attention to the bird and further protecting nature.

He participated in volunteer project competitions and gives speeches in elementary and middle schools in Xiangshan county and Ningbo city, trying to raise people's awareness of wildlife protection.

"I do not share my story for applause. Instead, I hope the efforts we made in the past 10 years can touch the public and inspire them to protect the wildlife they encounter. That would be the most rewarding thing to me," he said.