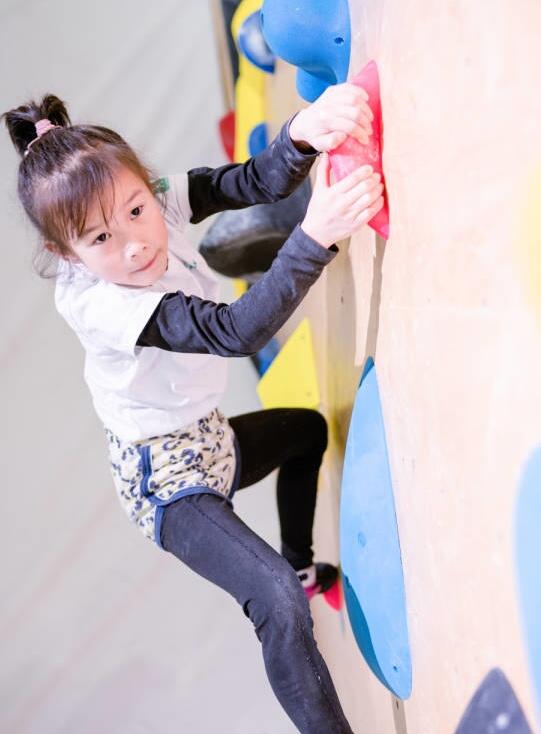 Can you imagine the rock climbing girl on a steep rock face is only nine years old?

The girl is called Wang Muyi, a three grader of the Third Affiliated School of Ningbo University. Before long, she successfully completes the difficult outdoor climbing route — "China Climbing", which is developed by Australian Logan Barber in Yangshuo, Guangxi province.

She is the youngest person to finish the 5.14A difficulty route in China and the sixth female climber in China to conquer this difficult outdoor climbing route!

In this 27-meter "Chinese climbing" route, the size of the climbing position is particularly small where children are more advantageous to hold than adults. But disadvantages exist at the same time. For shorter height and less wide arm span, Wang Muyi has to split an adult’s stride into several steps, which sets a higher requirement for her ability to maintain physical balance.

Success is the outcome of painstaking efforts. In fact, like her peers, she sometimes also struggles with undesirable physical conditions and even breeds the thought of giving up. It is an occurrence encountered by many parents. Encourage or blame? “For you, we have spared no effort. How can you give up?" Unexpectedly, her mom didn’t push or force her. “It’s ok.” She agrees with Wang’s decision to stop training.

In fact, we have factored into the child's rebellious psychology but blind encouragement will only let the child feel that you want them to do something. Only encouragement from children’s view is effective. In addition, solely depending on perseverance is far from enough and hearty interests are also needed.” After two months, Wang showed her presence in the training arena again. From then on, she didn’t say any words about giving up.

Rock climbing is like a problem-solving game combining mental and physical strength. It requires not an only wholehearted exercise but also detailed consideration. You need to plan the route, unleash your power both of body and mind, and adopt an optimal route. So, every time after successfully tries a new route, Wang Muyi is filled with a sense of achievement.

Whenever you encounter adversities, you should every means possible to remove them and harvest the pleasure of success. The lesson is also applicable to study. “Wang Muyi not only did not fall behind in her studies but also excelled in performance. She was also the teacher's right-hand man. Her thin body seemed to always contain strong energy!” Her headteacher said.