"The vegetables have arrived!" At around 7 am on September 27, nine bright orange lorries loaded with 4600 basic necessities arrived at the east, south and north entrances of Qinglin Bay West. At the entrance of the east gate, Zhao Bingquan, a member of Haishu Group's "Red Sea Commando" team, and other street and community workers saw them from afar and immediately ran up to meet them, carrying, counting, transporting and distributing them in an orderly manner. 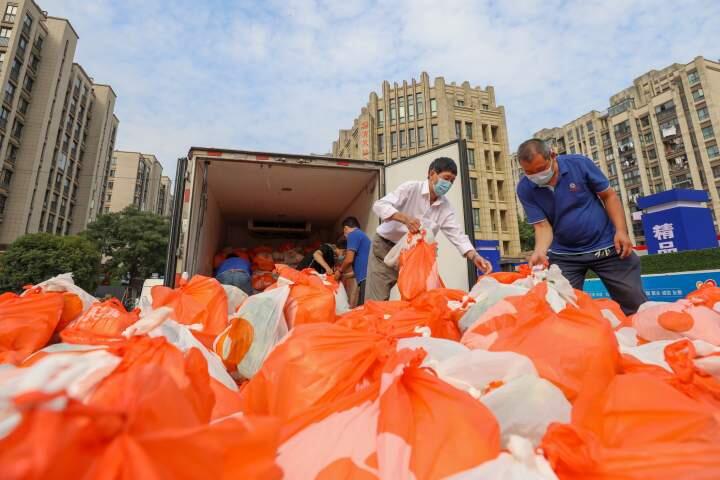 On the evening of the 26th, an epidemic broke out in Qinglin Bay West, Haishu District, and the area pressed the "pause button". "Since we received the news in the evening, we immediately took action to prepare the supplies, and after 2 hours of preparation, by 7 pm, all the 4,000 supplies needed for the western part of Qinglin Bay were ready." The relevant person in charge of the Haishu District Business Bureau said.

There are more than 10,000 permanent residents in Qinglin Bay West, and the size of its population is quite large. How did the 4,000 material packages finish all the preparations in just 2 hours? "In order to avoid an epidemic outbreak resulting in a shortage of basic supplies for residents, we launched an emergency plan, with four supply assurance channels operating simultaneously, including large supermarkets, vegetable basket bases, key trade enterprises and e-commerce platforms, and distribution and supply through platforms such as Little 6 Buy Food, Vegetable Rowing and M6." The relevant person in charge of Haishu District Commerce Bureau said.

Considering that Ningbo Hospital of Traditional Chinese Medicine was affected by the epidemic, Haishu District Business Bureau immediately contacted Ningbo Vegetable Basket Base to distribute dishes for the hospital canteen according to actual needs. When the list of canteen supplies was opened on 27 September, the reporter saw that there were 66 items, including pork, chicken, duck, vegetables, fried noodles and rice noodles, which were very abundant. In addition, large supermarkets prepared 1,500 copies of toiletries overnight on the 26th to provide basic living security for the quarantine staff at Ningbo Hospital.

With the joint efforts of the Red Sea Commandos, and street and community workers, the supplies were delivered to the residents. "The government is very considerate, we also feel at ease." As soon as he received the pack, resident Yu Wenyue introduced that the pack was divided into two bags, one containing vegetables such as lotus roots, potatoes, carrots, mushrooms, onions, ginger and garlic, while the other bag contained fresh food such as pork and fish in insulated bags, with a wide variety of meat and vegetables.