Pets well provided for during pandemic 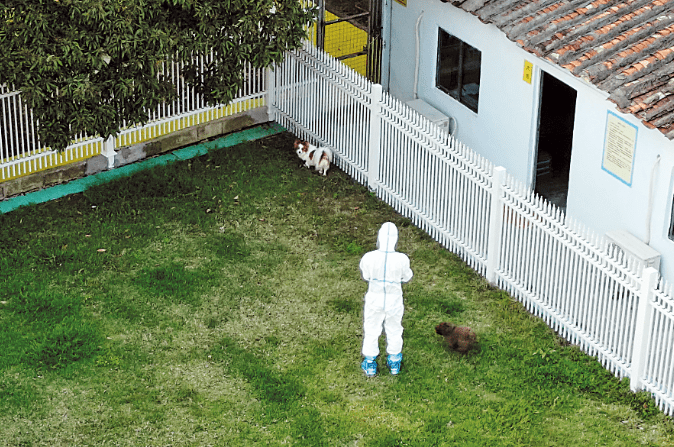 As the COVID-19 situation in the neighborhood stabilized, the two centers closed earlier this month. In addition to cats and dogs, they housed seven hamsters, one rabbit and a duck.

Some cats encountering a new environment became stressed and were reluctant to eat. Kong said that among the 140 cats, more than 60 showed such symptoms. "No one had previous experience in running a makeshift center for pets, but during the whole process we were trying to create good conditions," he said.

For the cats, volunteers used aromatherapy in each container that secreted a hormone to calm the animals. Medication was added to their food to stimulate appetite, and the volunteers also gave the pets snacks, took them to the lawn and used toys to interact with them.

Volunteers registered the name, age, breed, living and eating habits of each animal as well as owners' contact details. They filmed a short video of each pet every day and sent the footage to owners. The volunteers also ensured that the pets were disinfected and dewormed before they arrived and kept records of the animals' cleaning and feeding times every day.

Over the 20 days of stay, Shenzhen's animal disease control center collected 715 samples from the surrounding environment and more than 200 saliva samples from animals. The samples returned negative after being sent for testing.

The entire service was free of charge. Pet owners felt reassured during their quarantine, and the experience was also rewarding for the volunteers. Kong summarized his team's work in a document and forwarded it to the local government.

He said, "During the pandemic, we explored little by little how to disinfect animals, standardize their transfer, operate pet care centers, ensure supplies and personnel protection, and coordinate communication management."

With the recent surge in COVID-19 cases in China, public concerns have been voiced about animals whose owners test positive. Some people fear that pet dogs could be intermediate hosts of the novel coronavirus and spread it to humans.

Bu Zhigao, a researcher at the Chinese Academy of Agricultural Sciences' Harbin Veterinary Research Institute, told Science and Technology Daily that the risk of dogs spreading the virus to humans is extremely low.

His team carried out a substantial amount of research in the early days of outbreaks on the transmission of the virus between different animals and on which pets were more susceptible to the novel coronavirus. The findings, published online in the journal Science in April 2020, showed that cats and ferrets were highly susceptible, whereas dogs, pigs, chickens and ducks were not.

"Judging from the laboratory data and the situation now, we can tell that dogs can be exposed to infection but are still relatively less susceptible compared with cats and ferrets, and dogs also have a low viral load," he said. Bu added that pet dogs have been found to be infected in Hong Kong, but there has been no transmission of the virus between dogs and humans.

He said that even if dogs are infected, the symptoms are not very obvious and test results can turn negative after a week or two of quarantine. However, his current research data are based on tests carried out on earlier strains of the virus. He said that as it has mutated several times, the updated infectivity and pathogenicity of the mutants require further studies and monitoring.

He added that for the treatment of pets as part of pandemic control measures, local conditions need to be considered when courses of action are drafted.

For pet dogs in close contact with positive cases, Bu suggested the animals be placed in quarantine for a period, the environment disinfected, and multiple nucleic acid or antigen tests be conducted using oral, nasal and fecal swabs.

"Current testing methods for humans are also applicable to dogs. This is a more scientific and rational approach to manage the risk," he added.