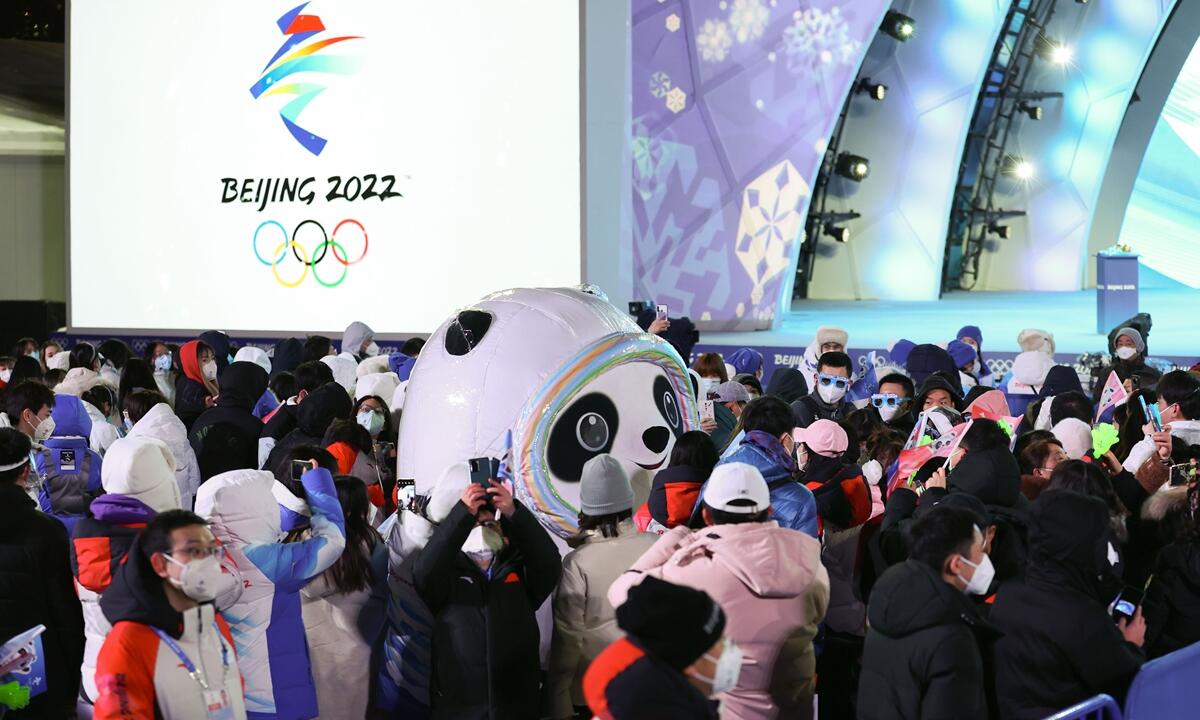 The Beijing Winter Olympics have so far been successful in containing coronavirus within the closed-loop system, as just over 400 people tested positive as the Games draw to a close over the weekend. Such an outstanding result has won praise from IOC officials, who congratulated China on its efforts to organize such a safe event, and blunted previous foreign media reports that said welcoming the country's biggest influx of overseas arrivals could challenge China's COVID-19 prevention measures.

The success in insulating the event from the virus and keeping disruption to sports events to a minimum also reflected the effectiveness and flexibility of China's overall zero-COVID policies, said epidemiologists. They believed that the COVID-19 prevention experience accumulated from this Olympics can also inspire Chinese cities to adjust their policies, as well as the further opening of the country's borders.

Beijing Olympic organizers said Thursday that there were no new COVID-19 cases in the "closed-loop" bubble for the first time. With the games coming to a conclusion on Sunday, there have been 435 cases in the "bubble" since January 24, when official figures began to be released, and no cluster infection has been reported.

This proves the effectiveness of the COVID-19 measures adopted within the closed loop, said Huang Chun, deputy director-general of the Office of Pandemic Prevention and Control of the Beijing 2022 Organizing Committee at a Thursday conference.

"I think we sometimes forget we are actually in the middle of a global pandemic. And we are hosting probably one of the most complex international competitions or events in the world very successfully," said IOC spokesperson Mark Adams at a Wednesday conference.

"We're now making sure that everyone can leave safely. That's also a huge logistical challenge. But I would take my hat off to our Chinese friends and colleagues first. Really great work," he added.

Dutch speedskating silver medalist Thomas Krol hailed China's COVID-19 prevention measures in the Beijing Olympic Village, saying that the closed loop creates a fairer environment for competition. The Dutch skater was impressed by China's swift nucleic acid testing procedures, saying that "everything is being organized really well and we are being safe there."

"They are doing a really great job in creating a COVID-19 free bubble right now. It is the safest place in the world right now. I don't think it's too strict. Otherwise, we may have an unfair competition if like half of the participants are positive," said Krol.

In an interview with the Global Times, William Frederick Blick, a member of the IOC noted that the closed-loop management and China's efforts in containing sporadic COVID-19 cases had been very professional.

"This COVID-19 games management by China will be a benchmark for all international sports and non-sporting events" as the pandemic continues, the IOC member said.

Representatives from future Olympic Games hosts, such as from the future Organising Committees of Paris 2024, Milano Cortina 2026, Brisbane 2032 and the Youth Olympic Winter Games Gangwon 2024, are currently gaining a "behind the scenes" look at the day-to-day operational demands of hosting an Olympic Games, as part of the IOC's Information, Knowledge and Games Learning (IKL) Programme at the Olympic Winter Games Beijing 2022.

However, some officials still warned against letting the guard down as the games are not over yet. "The Games are still going on and we are optimistic but we still need to be very careful," said Huang.

It is estimated that the number of departures of Olympics attendees will peak next Monday, one day after the Games' closing ceremony, with more than 6,000 people leaving Beijing. The Civil Aviation Administration of China is preparing for the peak time, rolling out measures such as designating special terminals in Beijing Capital International Airport for flights ferrying Olympics participants, and increasing the number of airport employees to guarantee rapid operations in processing related flights.

The public security authorities of Beijing Capital International Airport warned non-Olympic travelers on Thursday to avoid contact with Olympic vehicles, urging them to give priority to those vehicles, and to drive slowly when approaching the terminals.

Huang explained at the Thursday conference that 2,000 overseas participants have already left, and there are still 14,000 foreign attendees staying in the closed loop.

The success of containing coronavirus within the "bubble" has also blunted previous foreign media reports that claimed the biggest influx of overseas arrivals into Beijing since the outbreak would be a "concern" for Beijing's COVID-19 control efforts and pose a challenge to its zero-COVID policies.

Many media outlets also changed their tone and gave credit to the organizing committee's efforts in curbing the spread of the virus.

"Such a result [in COVID-19 control] is predictable, as it is in fact an extension of China's overall zero-COVID policy, and proved how successful and flexible such policies can be adopted in different situations," Zeng Guang, former chief epidemiologist of the Chinese Center for Disease Control and Prevention, told the Global Times.

Zeng believed that the foreign media's previous concerns only reflected their misunderstanding of China's dynamic zero-COVID policies, which they claimed were "drastic." "The policies are in fact very flexible and precise, so that they managed to maintain a balance between insulating the Games from the virus and guaranteeing athletes' participation in competitions," said Zeng.

According to the COVID-19 playbook of the Beijing Winter Olympics, an athlete confirmed to be a silent carrier of the coronavirus can leave isolation and return to training or competition once he or she presents two negative nucleic acid tests at least 24 hours apart. The event also dropped the CT threshold of nucleic testing from 40 to 35, making it easier for competitors to produce a negative test.

The global pandemic is something that every person in society has to make sacrifices for. We knew that there would be protocols in place to ensure the safety of everyone taking part at Beijing 2022 - athletes, staff and volunteers," Georgina Harland, an Olympic medalist and Chef de Mission Team Great Britain for Beijing 2022, told the Global Times.

"The health and wellbeing of our delegation is our number one priority and as such we know the importance of following the guidelines that have been put in place," said Harland.

Huang also noted that they are utilizing the experience accumulated from the Olympics, and believed the successful model in controlling the virus within the closed loop will shed light on the future battle against coronavirus in Chinese cities, as well as the further opening of China's borders after the pandemic.

Some foreign media also worried that another challenge will emerge when some working staff from the Winter Olympics come out of isolation and trigger infections.

Epidemiologists brushed off the possibility, saying that the staff are young, have received booster shots and will undergo strict medical observation before leaving isolation. "The risk of them causing infection is even lower than the sporadic transmission in ports and airports," said Zeng.