Traffic police officers persuade a driver to turn back at a toll gate in Suzhou, Jiangsu province, on Tuesday.(Photo/Xinhua)

The city reported nine new locally transmitted COVID-19 cases and two asymptomatic cases by 3 pm on Wednesday, taking the totals in the latest outbreak to 35 confirmed cases and seven asymptomatic ones, Gu Haidong, its executive vice-mayor, said at a news conference.

An official from the COVID-19 joint prevention and control headquarters at Suzhou Industrial Park said a guidance system had been established to offer help to companies in the park.

"A working mechanism between the government and the companies in the park has been established," the official said. "We collect the requirements from the companies and organize social forces to provide materials that are needed by the companies."

Because it is affecting one of the economic and technology hubs in the delta, the outbreak of the Omicron strain of the novel coronavirus might have a significant impact on sectors such as the integrated circuit industry.

Sino Wealth Electronic said on Monday that its production might be significantly affected by the suspension of production by two suppliers, Securities Times reported.

According to a list of China's 10 top semiconductor manufacturing enterprises in 2017, which was released by the China Semiconductor Industry Association, one of the affected suppliers, HeJian Technology (Suzhou), ranked fourth among wafer foundry original equipment manufacturers.

"If HeJian cannot resume production due to the epidemic, it will have a significant impact on the company's production and operation," Sino Wealth Electronic was quoted as saying. 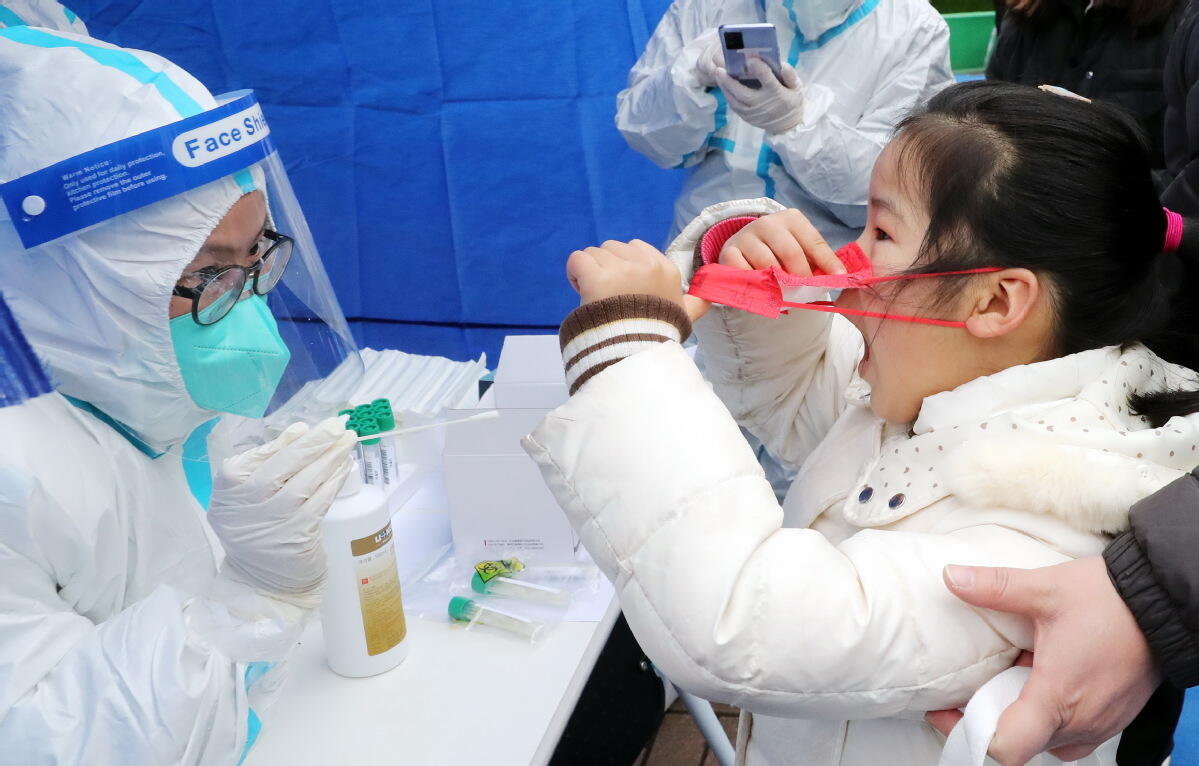 A girl is tested for the novel coronavirus in Suzhou on Wednesday. (Photo/China Daily)

Suzhou Industrial Park, where HeJian is located, is an important integrated circuit industry base in the Yangtze River Delta.

The official from the park's COVID-19 prevention and control headquarters added that supermarkets and food markets had been urged by the city government to ensure basic supplies for residents, and that various daily necessities had been provided to people living in parts of Suzhou that had been locked down.

Suzhou Industrial Park had provided 68,000 meals and more than 2,600 blankets for people living in areas under lockdown by noon on Wednesday. It also provided them with sweet glutinous rice balls, a traditional snack eaten during Lantern Festival, on Tuesday evening.

Suzhou has imposed strict travel restrictions to curb the spread of the virus. Starting Wednesday, anybody leaving the city by train had to provide a negative result for a nucleic acid test taken within the previous 48 hours.