-- Despite the challenges brought by a large number of Games participants arriving from overseas, Beijing 2022 has managed to keep the Games safe with stringent and effective COVID-19 countermeasures.

-- Over 10 days into the event, the number of positive cases reported inside the "closed loop" for the Winter Olympics has declined from a peak of 26 cases on February 2 to zero on February 13.

-- Athletes as well as officials have given positive feedback on anti-COVID policies and their Games experience.

With more than 10,000 athletes, journalists and officials from around the world having descended on Beijing for the Winter Olympics, holding a safe Games represents a daunting challenge for the organizers. But thanks to stringent and effective COVID-19 countermeasures, the Games has proceeded smoothly so far with the risk of infections under control.

Over 10 days into the event, the number of positive cases reported inside the "closed loop" for the Winter Olympics has declined from a peak of 26 cases on February 2, two days before the Games opened.

"The situation inside the closed-loop is safe and there is no sign of virus transmission, which can be said to have met our expectations," Brian McCloskey, chief of the Beijing 2022 Medical Expert Panel, told a press briefing last week.

The 2022 Winter Olympics is unique as it is the first Winter Games held amidst an ongoing global pandemic. A range of strict protocols are in place to ensure the safety of competitors, officials, international media staff and spectators, as well as all the personnel concerned.

It all starts at the airport, where athletes, coaches and others go through entry procedures, including the first of daily COVID-19 tests.

The closed-loop system, which is being applied to all three competition zones in Beijing, Zhangjiakou and Yanqing, is central to the organizers' COVID-19 countermeasures. Hotels and sports venues are linked by special buses and trains to separate participants within the closed loop from the general public and prevent coronavirus spread. 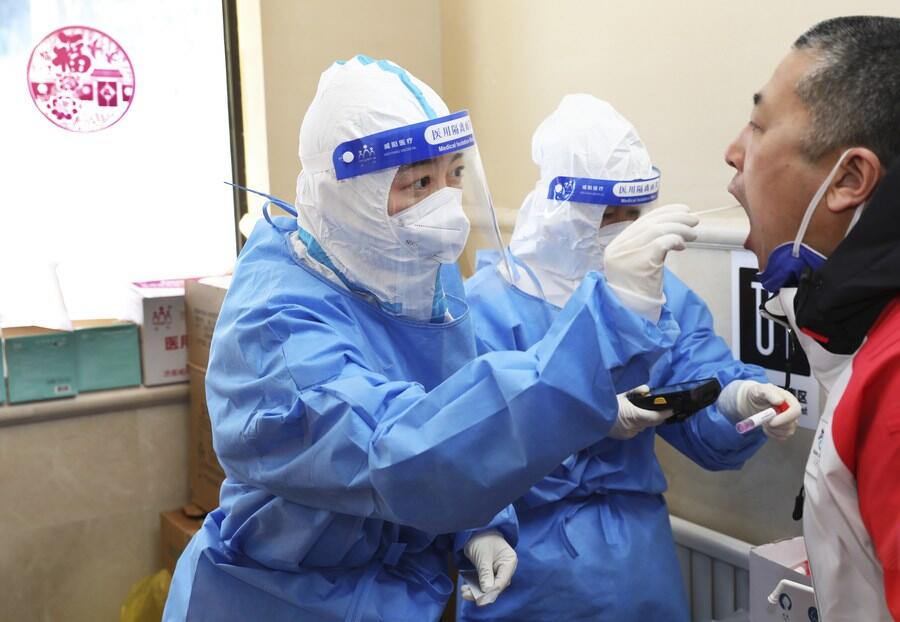 Everyone is tested daily for the virus, and anyone who tests positive is rapidly isolated to prevent any spread. Athletes and others are required to wear N95 face masks when not competing.

A wide range of Games participants are hugely supportive of these policies.

Richard Lam, the venue photo manager of the Yanqing Sliding Center, arrived in Beijing early in December 2021 and had an opportunity to tour the city before entering the Olympic bubble.

"I feel completely safe here and glad that all the countermeasures and procedures that have been put in place," said Lam. "It's designed to keep everyone safe at these Games."

Lam's remarks were echoed by Australia's four-time Olympian Britteny Cox, who said, "I actually think the bubble is really excellent. I feel really safe, I feel like the village is incredibly clean and healthy."

According to BOCOG, the overall cumulative total of positive COVID-19 cases for the Games-time period now stands at 433, while 1,453,939 coronavirus tests have been conducted so far.

"Really no effort is spared, no stone unturned to keep everybody safe. The degree of sophistication of the operation is something unprecedented. The job that has been done is absolutely remarkable," said Dubi.

The Olympic Games is always a perfect stage to showcase cutting-edge technologies. At Beijing 2022, technologies have also played a part in the prevention of virus.

An air disinfection robot working at the lobby of a hotel for the 2022 Winter Olympics in Beijing on January 17, 2022. (Xinhua/Ren Chao)

In a bid to reduce human interaction, robots are being used to safely deliver food at the canteen in the Main Media Center. Foods like noodles and burgers are also made by robots.

Robots for disinfection, body temperature checks and environment monitoring are also equipped at many venues.

Tickets were not sold to the public amid concerns over the spread of coronavirus, but Beijing 2022 has found a way to create a warm and friendly atmosphere for all athletes.

The organizers have invited a number of spectators from targeted groups of people who are required to abide by strict COVID prevention measures.

And Japan's star figure skater Yuzuru Hanyu is one of the athletes who has received huge support despite competing away from home.

After Hanyu finished his free skate program on February 10, the crowd in the Capital Indoor Stadium greeted him with loud cheers and applause. Hanyu responded with a deep bow.

A throng of journalists and photographers wait for Japanese figure skater Hanyu Yuzuru to attend a press conference at the Main Media Center in Beijing, Feb. 14, 2022. (Xinhua/Li Ga)

"I felt a warm welcome from the volunteers and my Chinese fans. Performing in that atmosphere makes me so happy," said the two-time Olympic champion.

In the lead-up to the Winter Olympics, some overseas media smeared the Games' COVID-19 policies, claiming that they are too strict and would cause a "psychological burden" for athletes.

"They have done a stellar job with the whole COVID protocols," said Blunck.

"I didn't really know what to expect being stateside. You heard some pretty bad media and that is completely false," he added.

Finland's ice hockey defenseman Sami Vatanen is also happy about his life inside the closed loop.

"Here you can take walks and you can ride bikes or you can go run. You can do almost whatever you like outdoors, so it's good," said Vatanen.

Sarah Escobar, an alpine skier who became the first Ecuadorian woman to compete in a Winter Olympics at Beijing 2022, told Xinhua she hoped her first trip to China would not be her last.

"They know how to make a really good first impression -- everything is so organized.

"All the Chinese volunteers are so considerate, so helpful and so willing to go out of their way for all the athletes. They work so hard just to make us feel safe, feel welcomed and feel at home," she added.