Tianjin goes all out to contain outbreak 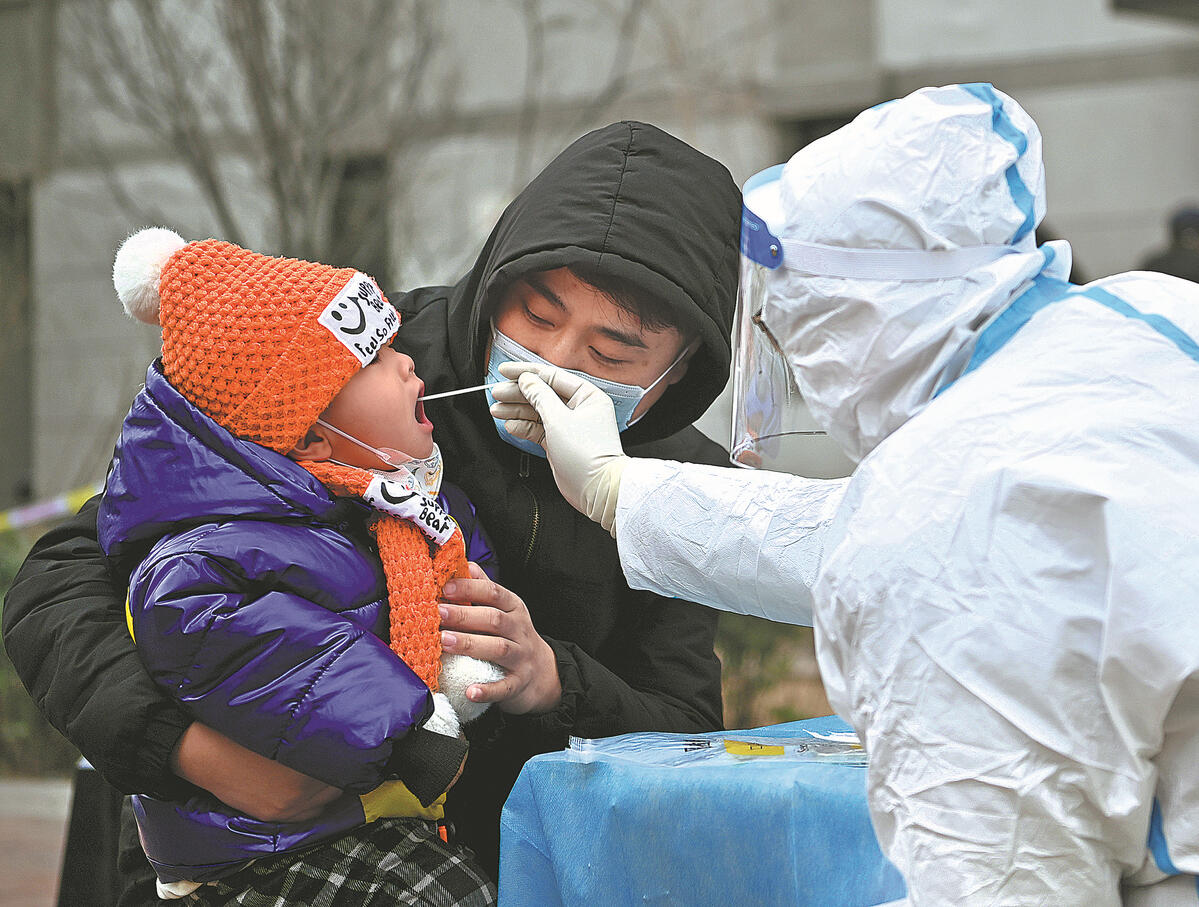 A child accompanied by a parent gets a nucleic acid test in Tianjin's Xiqing district on Sunday. Tianjin has launched citywide mass testing for COVID-19. (Photo/Xinhua)

The new COVID-19 outbreak in Tianjin is the first time that locally transmitted cases of the Omicron variant have been discovered at the community level on the Chinese mainland, said a top health expert.

The discovery not only deserves attention, but will provide experience in how to contain the variant in the future, said Zhang Boli, an academician of the Chinese Academy of Engineering. He said the port city in North China is facing the mainland's first large-scale epidemic prevention and control battle against Omicron. The strain is highly infectious but has mild symptoms, Zhang said in a Science and Technology Daily report on Monday.

"The cases of infected young people, especially primary and middle school students, make up a big part of total infections. This is a new feature of Omicron, that it is more infectious among the young," he said.

According to Tianjin's health commission, the city had 31 confirmed COVID-19 cases and 10 asymptomatic ones as of 6 pm on Monday. Two of the cases have been confirmed as the Omicron strain, and more than half of the cases are students.

Tianjin launched mass nucleic acid testing on Sunday. As of 3 pm on Monday, samples from more than 9.6 million people had been collected, and 1,152 close contacts of the confirmed cases have been identified. Around 75,000 people have been quarantined.

The municipal government announced on Monday that the health commission will make efforts to get a clear picture of the potential risks of the outbreak over the next 48 hours to better curb its transmission.

In December, Tianjin, which is 130 kilometers from Beijing, became the first city on the mainland to report an imported Omicron case. However, the current outbreak is not linked with that case.

Meanwhile, Henan province reported 60 cases on Sunday, the provincial health commission said on Monday. Of those, 24 were found in its capital, Zhengzhou, 15 in Anyang and 21 in Xuchang.

Genome sequencing by the Henan Center for Disease Control and Prevention found that two locally transmitted cases in Anyang were the Omicron variant, Anyang Daily reported on Monday.

The cases are part of the transmission chain in the current outbreak in Tianjin, the center said. The source of the new cases in Anyang has been identified as a college student who returned from Tianjin to Tangyin county, Anyang, on Dec 28.

Tianjin has taken strict measures to cut further transmissions. People are advised not to leave the city unless necessary. Travelers who must leave the city are required to have green health codes, a negative nucleic acid test result no older than 48 hours and travel approval from their employers or communities.

The Beijing Center for Disease Prevention and Control said on Sunday that residents of Beijing should avoid going to Tianjin, and intercity commuters have been asked to work at home instead of traveling.

In all, 97 locally transmitted confirmed COVID-19 cases were reported on the mainland on Sunday, the National Health Commission said on Monday. To reduce intercity travel, many cities in China are encouraging residents to stay put for Chinese Lunar New Year, which falls on Feb 1.