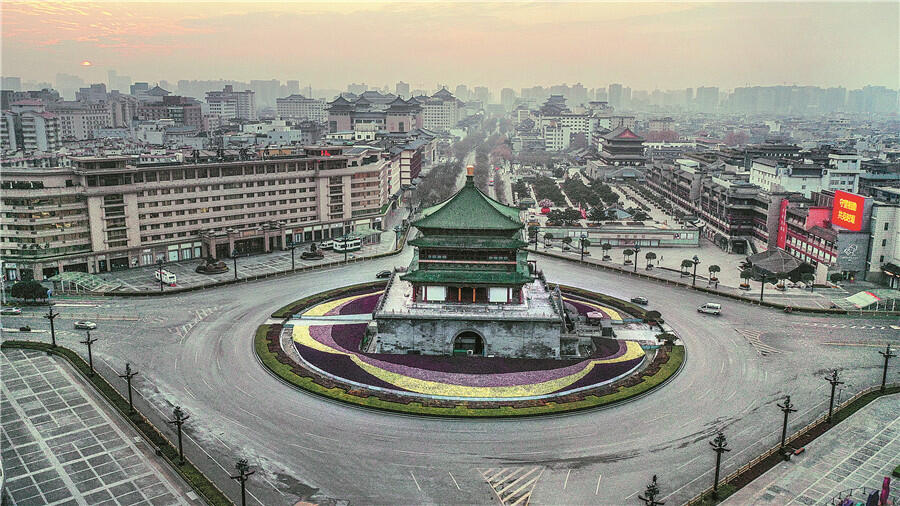 Country to continue with strategy as contagious variant sweeps world

China will continue with its zero-COVID-19 policy, which has proved effective and is gaining wider international recognition amid emergence of the Omicron variant, according to officials and experts.

The nation has seen more than 40 locally transmitted outbreaks since bringing the COVID-19 outbreak under control in Wuhan, capital of Hubei province, and throughout the province. These outbreaks were caused by imported infections, according to health authorities.

"Under the overarching goal of preventing imported infections and domestic flare-ups, this policy means that when a new local outbreak occurs, measures will be taken to promptly stem the spread of the virus and clear new infections," he said.

"This approach is the best option and the guiding principle of China's disease control work. We must resolutely adhere to the policy and protect the health and safety of the population as the top priority."

Wu Zunyou, chief epidemiologist at the Chinese Center for Disease Control and Prevention, said the strategy of swiftly dealing with new outbreaks can protect most regions of China against the virus, ensure people live normal lives and that production can continue.

"This policy has had significant results," he said. "Most regions on the Chinese mainland are free of COVID-19 infections, and new cases are either detected among incoming passengers or brought in by cargo from overseas."

In late November, Wu forecast that without these stringent measures, and as the virus rampaged across the world, China would have experienced some 47.8 million infections and 950,000 related deaths if the infection and death rates were on par with the global average.

As the Omicron variant spreads rapidly across the world, prompting many countries to reimpose border closures and travel curbs, experts said the success of China's policy has become even more evident.

In an interview with Bloomberg, Huang Yanzhong, a senior fellow for global health at the Council on Foreign Relations, which is based in New York, said the Omicron variant was a "booster shot" for the zero-COVID policy.

He added that efforts by some Western countries to reinstate COVID-19 restrictions have undermined their claims that the approach adopted by China is not sustainable.

Martin Jacques, a well-known scholar from the United Kingdom and a former senior fellow at Cambridge University's Department of Politics and International Studies, said on Twitter that Western nations, despite their dismal performances in dealing with the virus, are questioning the effective work performed by China.

"Omicron arrives. Up go the restrictions. Panic stations. And China is sitting pretty. When will they learn－from China," he said in a post in late November. Residents line up for nucleic acid tests in Hangzhou, Zhejiang province, on Dec 10 after new cases were detected in the city.(Photo/Xinhua)

A common misconception of China's virus control strategy is that it is aimed at achieving zero infections.

Liang said, "Currently, we are not capable of ensuring there will be no more new domestically transmitted infections, but we are capable and confident of stamping out local infection clusters as quickly as possible.

"A dynamic zero-COVID strategy means not letting the pandemic spiral out of control, but actively controlling it. This strategy meant we had to take prompt and precise action."

Liang said the first line of defense is implementing pre-departure prevention measures targeting overseas travelers to China－placing these arrivals under "close-loop management" immediately they enter the country. Measures to prevent transmission via objects should also be taken.

"People with symptoms such as fever or respiratory illnesses are transferred by special vehicles to designated hospitals, where they are isolated for further diagnosis and treatment. We also thoroughly disinfect all areas they pass through."

Wu Hao, a national-level disease control expert and public health professor at Capital Medical University in Beijing, said the fact that the mainland's first Omicron infection was detected in a centralized isolation area is evidence of the effectiveness of the nation's monitoring system.

In July and August, some 10 rounds of mass testing were carried out in Yangzhou, Jiangsu province, to handle a local outbreak of COVID-19.

Wu Feng, head of the intensive care unit at the Affiliated Hospital of Yangzhou University, said during a news briefing that because the novel coronavirus has an incubation period and is transmitted "stealthily", it is extremely difficult to detect all infections at the same time.

"As a result, even when the majority of residents test negative for the virus in earlier rounds of mass testing, it is necessary to launch more tests at the right moment," he said.

Last month, when Manzhouli, Inner Mongolia autonomous region, was hit by a local outbreak, the city's testing capacity stood at some 12,000 samples per day.

Guo said that as of last month, 30 million samples could be processed nationwide each day.

"Also, to lessen the public's financial burden, most provincial-level regions have lowered the cost of a test per person to less than 40 yuan ($6.30) and to under 10 yuan for group tests," she said.

"It is not a single measure or strategy that works, but a combination of multiple factors－for instance, an altruistic spirit, as well as coordination between government departments." 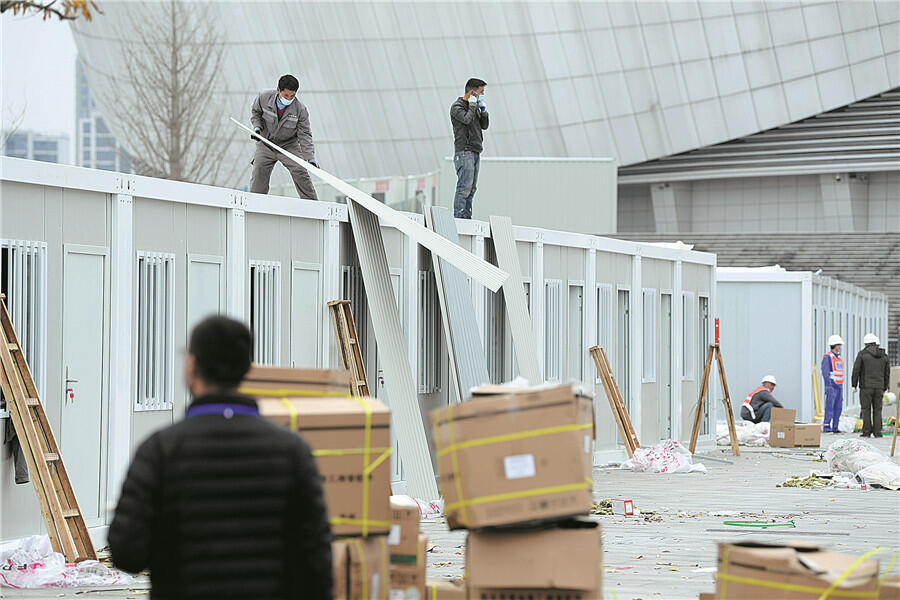 As China becomes increasingly efficient in tackling imported infections and local outbreaks, more emphasis has been placed on striking a balance between disease control requests and enabling people to live normal lives.

Ma Xiaowei, minister of the National Health Commission, said in an interview with Xinhua News Agency, "Virus control work should be precise and considerate, and local authorities should provide a range of supportive policies to reduce the impact on people's lives and production, and achieve the best results at the lowest possible social cost."

The introduction of buffer zones in a number of border and port areas is an example of such efforts, according to authorities.

Liang said, "Villages in a port city where buffer zones are established can adopt stricter measures, including setting up checkpoints and imposing restrictions on people's movements, while the remaining areas of the city only need to impose regular disease control measures.

"In the buffer zones, regular activities can take place when there are no new cases, but regular screening and health monitoring will be performed."

In Yunnan province, authorities in Ruili city pioneered this approach due to the long border with Myanmar.

According to Liang, "Establishing buffer zones can provide an additional barrier to protect against the virus being imported, further reducing the likelihood of it spilling over from high-risk areas."

Zhang Guizhen, who owns a local jade business, said: "On hearing this, I began tidying up my shop, preparing hand sanitizers, disinfectant and thermometers. It was great news for jade vendors."

In October, a local COVID-19 outbreak was reported in Ejine Banner, Inner Mongolia, during the peak autumn tourist season. Local authorities said more than 9,000 visitors were stranded in the area.

To help them return home while ensuring their health and safety, the authorities drew up plans for rail passengers, individual travelers, motorists and those using buses.

Xu Xiuzhen, a traveler from Shanghai, said on the train journey home, "Even though we were stranded, we were treated warmly, with the local authorities providing us with sufficient protective equipment, medical products and food."

As the new year dawns with the development of a number of vaccines and promising drugs to treat COVID-19, experts are discussing a possible end to the pandemic.

Zhong Nanshan, a prominent respiratory expert, said that before China returns to pre-pandemic life, the global death rate from COVID-19 should fall to about 0.1 percent. Last month, this rate was estimated at around 1 percent to 2 percent.

In addition, the virus' basic reproduction rate, also known as R0, should be maintained at about 1 to 1.5, Zhong said. The reproduction rate for the Delta variant－the dominant strain worldwide－is estimated to fall between 5 and 8.

As of Friday, more than 2.9 billion COVID-19 vaccine doses had been administered on the mainland, according to the National Health Commission.

Zhang Boli, an academician at the Chinese Academy of Engineering, who is a leading traditional Chinese medicine expert, said the pandemic would likely stabilize in spring, when China might ease its control policies.

"However, opening up completely will depend on the global situation, especially outbreaks in some African countries where the average vaccination rate is only about 10 percent," he said, adding that high alertness and close observation of new strains are still needed.