Against all odds, Winter Games open in dual-Olympic city Beijing

-- Beijing became the first city ever to have staged both summer and winter editions of the Olympic Games.

-- Around 2,900 athletes from 91 countries and regions are competing in Beijing 2022, a demonstration that sport can lead the way in reuniting the world with the Olympic spirit.

Beijing is basking in the glow of the Olympic flame for a second time after the 2022 Winter Olympics officially opened Friday night in the Bird's Nest Stadium - an iconic 2008 Summer Games venue.

Having already successfully hosted the Summer Olympics 14 years ago, Beijing becomes the first-ever city to stage both summer and winter editions of the global sporting gala. Fireworks illuminate the night sky during the opening ceremony of the Beijing 2022 Olympic Winter Games at the National Stadium in Beijing on Feb. 4, 2022. (Xinhua/Chen Jianli)

The torch was relayed inside the stadium between seven prominent Chinese athletes, each of the first five representing a decade of birth from the 1950s to the 1990s. Then, in what promised to be a revolutionary way of lighting the Olympic cauldron, Chinese female cross-country skier Dinigeer Yilamujiang and male Nordic combined athlete Zhao Jiawen, both born after 2000, jointly placed the torch in the middle of a giant snowflake-shaped cauldron, which ascended to the top of the stadium.

Instead of a blazing fire burning in the cauldron, this time, the Olympic flame was dancing lightly in the air at the heart of the cauldron.

The innovation of the lighting ceremony represents China's commitment to an eco-friendly and low carbon footprint, in line with the principle of hosting a "green, inclusive, open and clean" Games put forward by President Xi, who has guided the preparatory work since China won the bid for the Games in 2015. 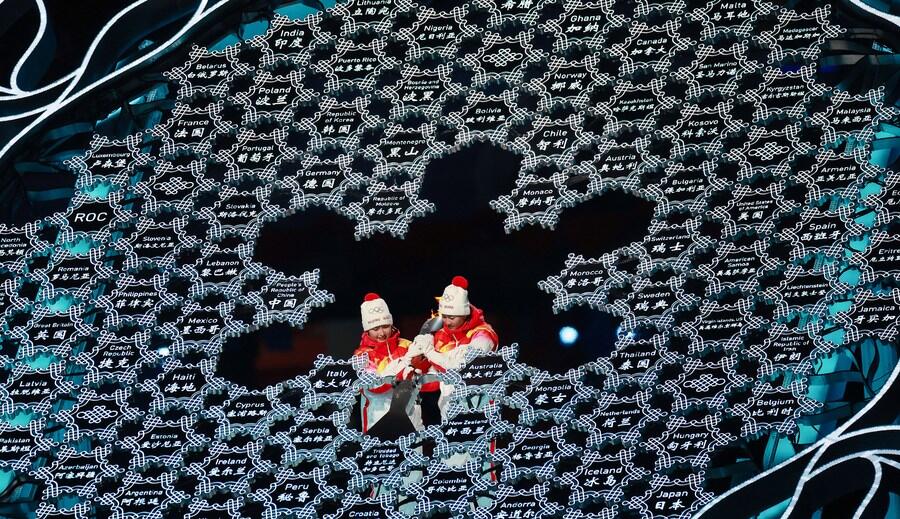 The cauldron is lit by Dinigeer Yilamujiang (L) and Zhao Jiawen during the opening ceremony of the Beijing 2022 Olympic Winter Games. (Xinhua/Liu Xu)

"Today, we witness here how Beijing becomes the first city ever to host both the summer and winter editions of the Olympic Games, and how China writes a new chapter in the history of the Olympic Movement," said Cai Qi, president of the Beijing 2022 Organizing Committee (BOCOG), in his address at the opening ceremony.

In early 2020, the sudden outbreak of the COVID-19 pandemic disrupted the Games preparations. Key meetings between the BOCOG and the International Olympic Committee (IOC) officials in Switzerland were forced to be held virtually.

What's more, the pandemic resulted in the postponement or cancelation of a number of test events. There were even concerns that the 2022 Games could be postponed, as the 2020 Tokyo Olympics was.

Nevertheless, the organizers have managed to get everything ready for the Winter Games. A range of strict COVID-19 countermeasures have been put in place to ensure the safety of the Games participants and the local population.

IOC president Thomas Bach hailed the opening of the Games and thanked the Chinese organizers.

"Unfortunately, the global pandemic is still a reality for all of us. Therefore, our gratitude is even deeper for the Beijing 2022 Organizing Committee, the public authorities and all the Chinese people. Thank you for making these Olympic Winter Games happen and making them happen in a safe way for everyone," said Bach. The first international multi-sport event held as scheduled since the outbreak of the COVID-19 pandemic, Beijing 2022 will provide another stage to demonstrate that sport can lead the way in reuniting the world with the Olympic spirit, as is the message of the Games' official motto - "Together for a Shared Future."

Against a scattering of calls for a so-called diplomatic boycott from some Western politicians, around 2,900 athletes from 91 countries and regions are competing in Beijing 2022, making it one of the largest in the 98-year history of the Winter Olympics.

Square dancers aged from five to over 70 years old presented a warm-up show before the countdown to the opening ceremony.

Footage from 10 Chinese cities were displayed during the pre-show, which epitomized China's campaign to engage 300 million people in winter sports, a promise that had been fulfilled before the start of the Games.

"This extraordinary achievement is the start of a new era for global winter sport. It will raise the global participation to new levels, benefiting the Chinese people as well as winter sport enthusiasts around the world," Bach said. Excitement greeted the final countdown, which started from 24, representing the 24th Olympic Winter Games and 24 solar terms in the traditional Chinese lunar calendar.

The grand opening of Beijing 2022 coincided with the very first of the solar terms "Lichun", which indicates the beginning of spring.

In a departure from the four-hour opening ceremony of the 2008 Games, the opening showpiece this time was shortened to about two hours due to cold weather and the pandemic.

Some 3,000 performers, about one fifth of the number included in the 2008 Olympics, were involved in Friday's ceremony, and none of them were celebrities or professional artists.

This is an effort to underline people's participation by director Zhang Yimou, who was also behind the awe-inspiring 2008 showpiece.

"It's always about the people. The spirit, emotion and hope are always the key points," he said. 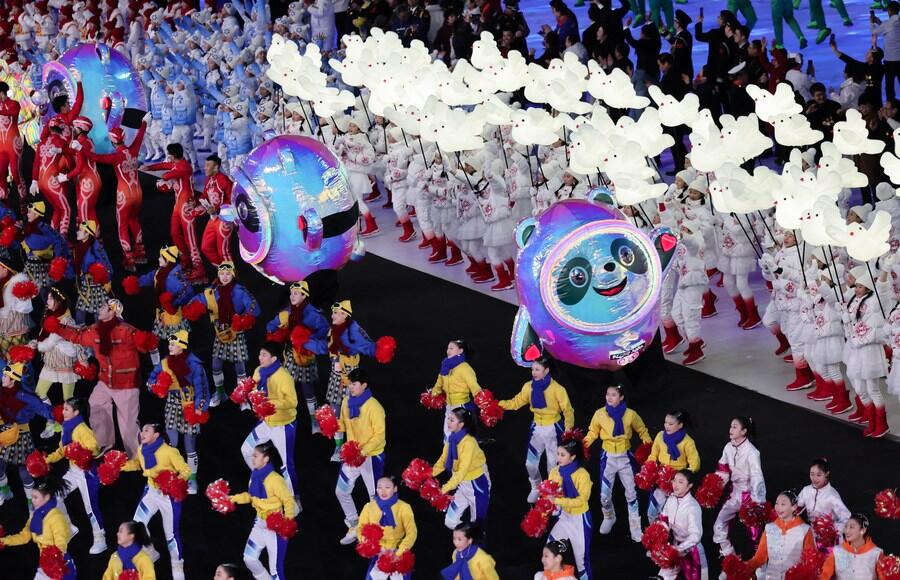 As a tradition for the parade of athletes, Greece entered the Bird's Nest Stadium first Friday night, while hosts China marched into the stadium last after the host nation of the 2026 Winter Games Italy.

Like in the 2008 Games, the march-in sequence was based on the stroke order of the first character of their team names written in Chinese, with Turkey following Greece.

Team China, with a record 388-member delegation in the Winter Olympics, was welcomed with roaring cheers and thunderous applause from the crowd, as were the delegations of Chinese Taipei, and Hong Kong, China, with 15 and 13 members respectively.

Over the next 16 days, China's 177 athletes will compete in 104 events across 15 disciplines in all seven sports, the country's largest-ever presence in a Winter Games.

In fact, China had never competed in about one third of the 109 events at Beijing 2022 when the city was awarded the hosting right of the Games in 2015.

Four years ago in PyeongChang, China only competed in 53 events of 12 disciplines, and took home one gold, six silvers and two bronzes, placing 16th in the gold medal tally. 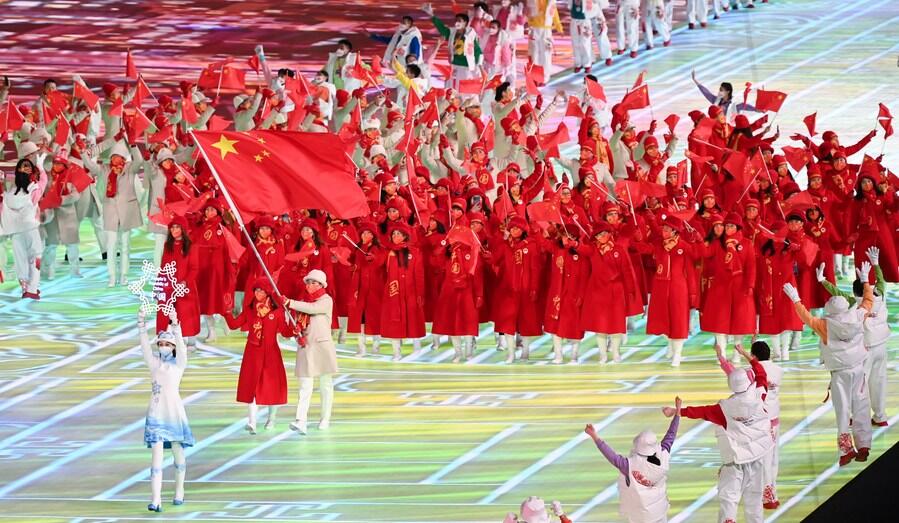 The Chinese delegation parades into the National Stadium during the opening ceremony of the Beijing 2022 Olympic Winter Games. (Xinhua/Xiong Qi)

Norway, who topped the medal tally with 14 golds and 39 medals in PyeongChang, set a humble 32-medal target for the 81-strong team while Germany, trailing on the second four years ago, hoped for a top-three finish this time.

History is also being made for Saudi Arabia and Haiti, who will make their Winter Olympic debut in Beijing, while the Czech Republic, Denmark and Sweden sent their largest-ever Winter Olympic teams.

The 91 placards carrying names of each participating team came together to form one single, large snowflake, framed by olive branches. The huge snowflake, which later turned out to be the cauldron, demonstrated the traditional Chinese principle of people living in universal peace and harmony.