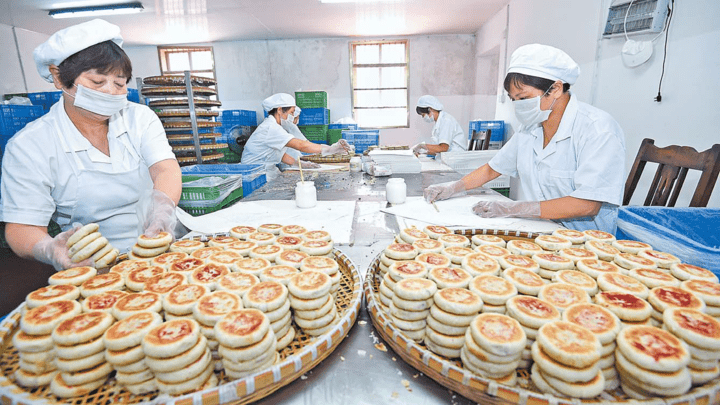 Mid-Autumn Festival will come half a month from now. Mooncakes, a Chinese bakery product traditionally eaten during the festival and symbolizing family reunion, have already been pre-ordered in the markets.

Yiting, where there are currently 20 mooncake manufacturers, is the most representative mooncake production base in Yiwu.There are some special features about Yiwu mooncake.

Chinese mooncakes are always covered with red stamps. Some regions use red dots and some use patterns, and Yiwu mooncake is covered with the name of its company.

There is a small hole in the back of Yiwu mooncake , for the aim of releasing the moisture inside the cake. Sticking this paper will prevent the filling from flowing out of the hole. If it is a machined mooncake, there is no paper.

Many people who eat Yiwu mooncakes always have a doubt that what is the red and green strips inside the mooncakes. Actually this is also a major feature of Yiwu mooncake. In the past, the red one and green one were something that dried by immature grapefruit skin and then cut into filaments , having the function of eliminate the fire-evil . Today , these strips are made from radish and winter melon.