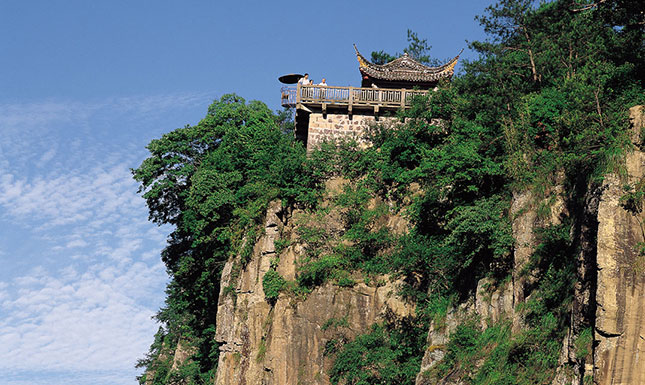 Situated in the north-west of Xikou Town, 20 kilometers away from Ningbo, Mount Xuedou Scenic Area is a National AAAA Level tourist area. It is renowned for its splendid and wonderful sceneries which include more than 60 attractions, and the Xuedou Temple is the most popular one. Mount Xuedou Scenic Area was already known as "a fairyland on the sea” early in the Han Dynasty (206 BC-220 AD). At an altitude of 800 meters, Mount Xuedou has a reputation for being the tallest mountain in Siming range, featuring graceful mountain ridges, unique cliffs, tempting waterfalls, and deep streams. The charm of Mount Xuedou lies not only in its picturesque sceneries but also in its status as the former residence of important historical figures Chiang Kai-shek and his son. Therefore, this place becomes more mysterious and interesting for tourists from China and abroad to explore.

Mount Xuedou has held a high status in Chinese Buddhism since ancient times. Located in a scenic site, the Xuedou Temple has a history of over 1600 years and has cultivated numerous eminent monks. It is also the place where Monk Maitreya practiced his Buddhism, thus a large number of eminent monks and pilgrims have been attracted to Mount Xuedou. Now, the temple covers a landscape area of over 20,000 sq meters and has perfectly combined natural landscapes and Buddhist culture.