ZJ's Pick: The Past, Present and Future of Tianyi Museum & Moon Lake

Though not very big, Moon Lake positions itself perfectly in Ningbo. It witnessed Ningbo’stransition from a narrow valley with limited scope for development to a broad city nurtured by three rivers. Meanwhile, it transformed itself from a natural lake to a lake of tremendous educational value.

The geographic and cultural importance of Ningbo Tianyi Museum & Moon Lake has been increasingly manifested after the founding of the People’s Republic of China in 1949. People settled around the lake, built water conservancy projects, spent their leisure time and enjoy their lives. More importantly, more and more people begin to explore its culture spanning almost a millennium, which turned Moon Lake park from an urban park into a modern cultural park. 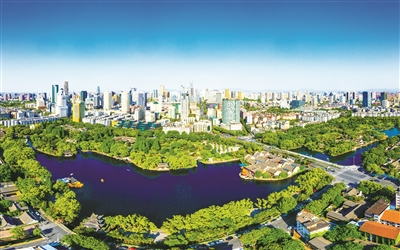 Every morning, Moon Lake is a good place for people to do some exercise and relax. This has to do with the water treatment project carried out a few years ago.

Behind the lush vegetation near the lake is a cabin, in which some large-scale pressurized equipment is operating to filter out the impurities in the water to make Moon Lake clean and clear.

The water treatment system can handle 16,000 cubic meters of water a day, which means, theoretically, all the water in Moon Lake can be renewed every 25 days.

Water conservancy represents the first step in promoting Moon Lake culture, which was vividly described as the culture of survival by Huang Wenjie, editor-in-chief of Tianyiwenyuan, a cultural academic journal in Ningbo. He said people in Ningbo gained a firm foothold in this city with their water conservancy efforts from Siming Mountain to Moon Lake during the past thousand years. A steady life is the foundation of people’s spare time and energy to open schools, build libraries and carry out cultural exchanges, according to Ningbo Cultural and Art Research Institute.

During the 7 decades following the founding of PRC, at least 3 rounds of Moon Lake water treatment have been covered by Ningbo Daily and other media.

In the 20 years that followed, Moon Lake resort saw the expansion of its green spaces and the construction of a big park. In 1981, an electric aircraft airport was built in June, where the models of Boeing 747 and Boeing 707 attracted 3000 tourists daily.

Moon Lake suffered grave pollution problem in 1984 as a result of the sewage from its surrounding areas. In September this year, Ningbo government began its 3-step approach to tackle the pollution in Moon Lake, the first step being the construction of a filtering gate and sewer pipeline around the lake, the second step being the improvement of landscape, including the expansion of green spaces and the construction of pavilions.

Living side by side with Moon Lake, people in Ningbo created a splendid culture centred on the lake. According to statistics, Ningbo has preserved and restored heritage sites of as many as 11 old buildings in MoonLake park during the past 70 years. These buildings carried unique and important historical significance, which made Moon Lake a cultural hub in Ningbo. 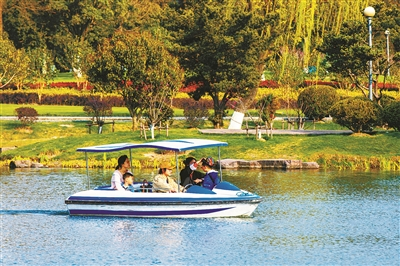 To boost cultural tourism in Ningbo and to create a signature of Ningbo cultural tourism, the Ningbo government initiated the efforts to build Ningbo Tianyi Museum& Moon Lake into a national 5A scenic spot in 2013. After 5 years of efforts at both city and district levels, Ningbo Tianyi Museum & Moon Lake resort was finally designated as a national 5A scenic spot on October 29 in2019.

The transition of Ningbo Tianyi Museum & Moon Lake from an urban park to a cultural resort is made with a commitment to high-quality cultural tourism and exploration of relevant culture.

In collaboration with experts, the resort will comb through eastern Zhejiang academic culture, book collection culture and Ningbo confraternity culture, which will be promoted in the form of fairs, poetry reading and tour guide presentation. The guiding system in the resort will be upgraded to present related history and culture with the help of AI technology. The splendid culture of TianyiMuseum and Moon Lake will also be promoted through the voices of Ningbo anchormen, whose reading of poems about Tianyi Museum and Moon Lake are recorded to create a voice library. Besides, creative cultural creative tourism products will be developed, such as fans, bookmarks, handbags and fridge magnet as an approachable way to promote the culture of the resort. Plan for the Next 500 Years

Ningbogovernment is now mapping out the development plan for Tianyi Museum for the next 500 years.

According to the plan, the construction of the southern hall of Tianyi Museum will kick off at the end of 2019. After its completion, it will function as a venue for the exhibition, cultural activities, academic exchanges, interactive cultural experience, protection and preservation, reading, tourism and cultural creative services, which is an innovation of the traditional culture of Tianyi Museum.

According to Zhuang Lizhen, curator of Tianyi Museum, the halls in the museum will be more aligned with each other both in their themes and functions. The northern hall focuses on “family” and “collection” in a traditional context while the southern one focuses on “public” and “use” in a modern context. These two halls will together tell the story of book collections and our country.

Activities have been launched in recent years to promote reading in Ningbo. As the symbol of book collection and reading, Tianyi Museum played an important in enablingNingbo residents to learn the traditional culture. Courses designed for primary and middle school students also help students have a good understanding of Chinese classics, including Disciple Gauge, ThreeCharacter Primer, The Analects of Confucius and The Book of Songs.

Once enjoying great popularity in the academic world, eastern Zhejiang academic school is the accumulation of the wisdom and intellect of scholars in eastern Zhejiang, who advocated humanistic pragmatism. In that spirit, Tianyi Museum will make new use of ancient books. Now, Tianyi Museum has compiled the most meticulous records of imperial examinations in recent years, and is working on the compilation and publication of local chronicles.

In addition, Tianyi Museum will deepen its digitization efforts to make it ancient books digitally available. The WeChat public account will be opened to provide information related to ancient books in an easy-to-understand way.