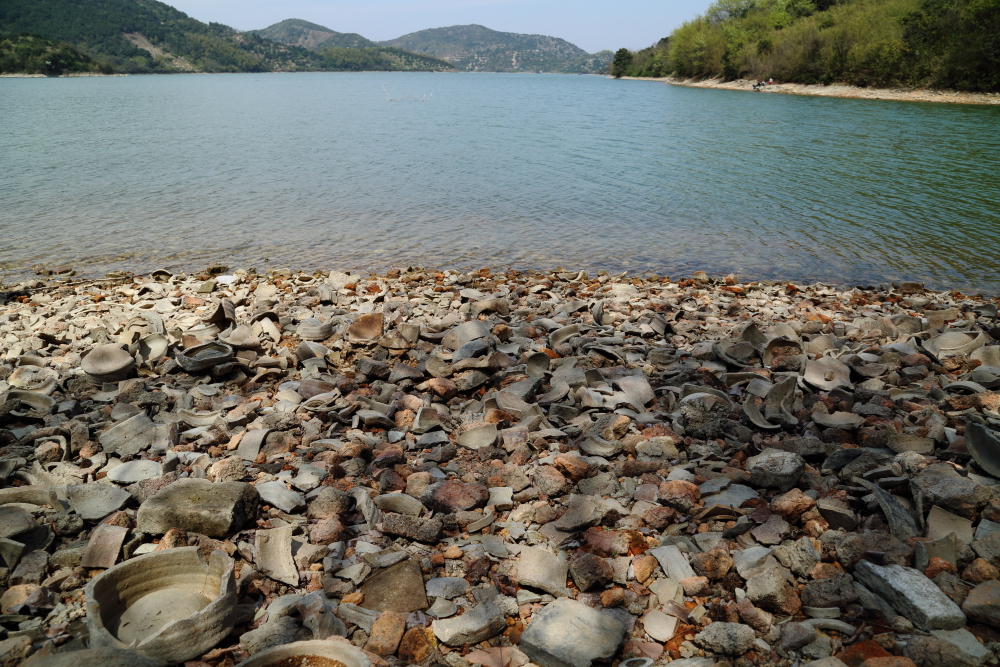 Shanglin Lake Yue Kiln Sites are located at Kaolao Mountain, the highest peak among the mountains of Cixi of Ningbo City, Zhejiang Province, on the shore of a narrow lake. The sites have more than 90 ancient kilns left from the Han Dynasty to the Song Dynasty, which are scattered around the long and narrow lake.

Porcelain chips and dilapidated kiln beds have been discovered in an area of 90,000 square meters. Archeological findings show that china production of Shanglin Lake Yue kilns started from the Eastern Han Dynasty and reached its prime in the Five Dynasties Period.

As one of the first kilns to produce porcelains, Yue kilns thrived for thousands of years till the Song Dynasty, and produced more than 1,000 kinds of delicate porcelains, most of which were daily utensils like tea sets and decoration crafts, with colorful designs like birds, beasts, flowers and plants.

Porcelain products were particularly rich in shapes and functions during the periods from the Tang Dynasty to the Five Dynasties, including ring-foot bowls, lotus-shaped bowls, lotus-mouth bowls, plates with lotus leaf patterns, as well as plates, dishes, oil boxes, trays, lamp holders and water jets of various shapes.

For smooth and solid texture, crystal glaze and exquisite carving, Shanglin Lake Yue Kilns ranked the first among major kilns in the then China. Thereafter the central government set the “Tribute Kiln” at the Shanglin Lake to make “Mystic-Glaze Ware”, a kind of porcelain with high artistic value for the court.

Royal musicians of the Tang Dynasty injected different amount of water into porcelain containers and played music on them with bamboo sticks, which produced varied tunes. People described this kind of priceless musical porcelain as “blue as the sky, bright as a mirror, thin as paper and loud as a chime”. Lu Guimeng, a poet in the Tang Dynasty eulogized it in this way:

The Yue Kilns open in autumn when cool dew drops hang on leaves,

There you behold a world of porcelain wares with verdant colors and myriad shapes.

Being exquisite and popular, porcelain wares were exported to more than ten countries from Mingzhou (Ningbo) as the key commercial goods since late Tang Dynasty, thus forming the ancient “Porcelain Road” leading to countries along the Persian Gulf and the Mediterranean coast, and making significant contributions to cultural communications and trade exchanges.