The Buddhist Center in Southeast China

The number of temples and monks in China saw a sharp reduction ever since the later Tang Dynasty (618-907 AD) due to the implementation of policies suppressing the development of Buddhism in the north. However, Buddhism managed to survive this onslaught, and even began to flourish in the south because of the efforts of the Qian family, who devoted themselves to the propagation of Buddhism, which is why one can still see quite a few ancient Buddha statues and pagodas in South China today.
It is reported that there are more than 150 Buddhist temples in Hangzhou, making the ancient Wu-Yue region a hotspot of Buddhism in the Southeast of China.

Putuo Mountain is located in the southeast area of the Zhoushan Archipelago, and is one of holy Buddhist sites in China. It is the only island in the region that possesses spectacular natural beauty and a deep religious history, leading to it being regarded as a "Buddhist Kingdom on the sea" and "the most peaceful place in the world". 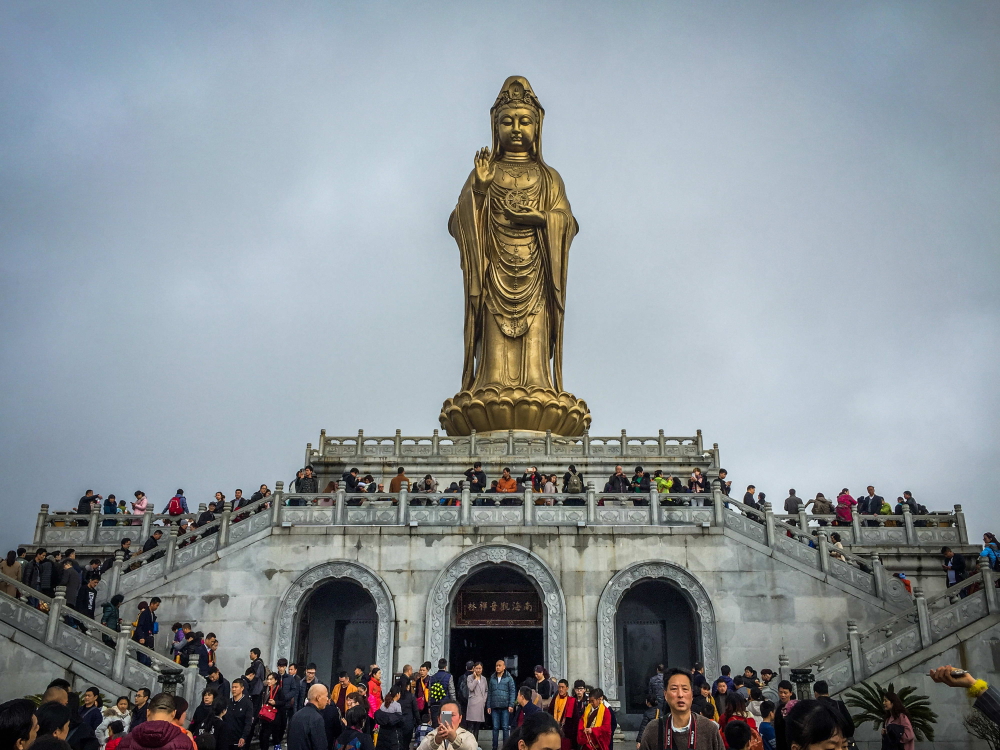 The history of religious activity at Putuo Mountain can be traced back to the Qin Dynasty (221-206BC). In the Tang Dynasty (618-907 AD), with the development of theMaritime Silk Road, Putuo Mountain made full use of its geographical advantage and quickly became a Buddhist hub. At that time, Chinese Buddhism began to spread to Southeast Asia, Japan, South Korea and other countries.

By the end of the Qing Dynasty (1616-1911AD), there were 3 major temples, 88 monasteries, 128 nunneries and thousands of monks at Putuo Mountain. It can be said that at each corner of the mountain, there was a temple; at the end of each road one could find a monk. Deeply influenced by Buddhism and its splendid natural scenery, Putuo Mountain became so enticing for ordinary people that throngs of people flooded into the area to explore the legends and mystery of the area.

Lingyin Temple, founded in 326 AD, is regarded as one of the oldest temples in Hangzhou, with a history of about 1,700 years. Nestled in a remote valley west of the West Lake, the temple is embedded between the Peak Flying from Afar and the Northern Peak. For the quiet and comfortable surroundings, Huili, an Indian monk, chose to build a temple here and named it “Temple of the Soul’s Retreat”, allowing Buddhism to gain a foothold in Hangzhou. In its long history, the temple has repeatedly experienced destruction and renovations, surviving fires, wars and many other accidents. In the Qing Dynasty (1644 AD-1911AD), the Emperor Qianlong bestowed the name“Yunlin Chansi” (云林禅寺) upon this temple when he was traveling to southern China. Later generations renamed Yunlin Chansi as “Lingyin Temple”; it is considered an essential part of the “Top Ten Views of the West Lake”.

Tianzhu Hill (天竺山) is famous for three old temples, known as “Three Temples of Tianzhu” (天竺三寺), which consist of Upper Tianzhu(上天竺), Middle Tianzhu(中天竺) and Lower Tianzhu(下天竺). When traveling in the region, the Emperor Qianlong of the Qing Dynasty (1644 AD-1911 AD) bestowed the name “Faxi Temple” (法喜寺),” Fajing Temple” (法净寺) and ”Fajing Temple” (法镜寺) upon them respectively. In 939 AD, a monk named Daoyi was studying Buddhism at the foot of Baiyun Mountain, and he went on to found the Upper Tianzhu, the youngest of the three temples, which has been standing there for almost a thousand years. The temple was repaired in 1898 AD in the Qing Dynasty (1644 AD-1911 AD), and was renovated in 1985 and 1991 again. The size of Faxi Temple is the largest among the three. A great number of fascinating stories about Guanyin took place here, which is why countless pilgrims pay a visit to the site.

Middle Tianzhu was built in the Sui Dynasty (597 AD) by Master Baozhang. After Emperor Qianlong traveled here, the temple had been renovated in 1892 AD. The temple suffered huge losses but managed to survive in the fire in 1947 AD. Due to great efforts of the government, Fajing Temple has been restored again now.

Located at the foot of the Peak Flying from Afar, the Lower-Tianzhu was built more than 1660 years ago, and is the oldest of the three. Lower-Tianzhu had been burnt to the ground in 1861 AD, and was rebuilt in 1882 AD. The temple now consists of the Heavenly Guardian Hall, the Main Hall and the Hall of the Buddha of Medicine. The structure of Gautama Buddha in Buddha of Medicine Hall is a unique sight in China. Moreover, Fajing Temple is to date the only nun monastery in Hangzhou.

With various images of Guanyin, the three temples have attracted numerous pilgrims every April and the event is historically known as “Pilgrims' Fair at Tianzhu”(天竺香市).