The preliminary designs of the Rudong-Nantong-Suzhou-Huzhou Intercity Railway (Nanxun-Changxing section) and Jiashan-Xitang Municipal Railway have been approved, with a total investment of about 35.5 billion yuan. The approval of preliminary designs for both projects has propelled the project forward.

The Rudong-Nantong-Suzhou-Huzhou Intercity Railway (Nanxun-Changxing section) starts from the border of Jiangsu and Zhejiang provinces, passes through Nanxun District, Wuxing District, South Taihu New District and Changxing, and finally ends at Changxing Railway Station. The total length of the line is 64.8 kilometers, and the design speed is 160 kilometers per hour. There are 11 stations in total. There will be 7 elevated stations including Nanxun Station, Yangnan Station, Zhili Station, Qiaonancun Station, Tuying Station, Hongqiaozhen Station and Changxing Railway Station, and 4 underground stations including Balidian Station, Yinshaner Road Station, Yinshanyi Road Station and  Taihu Road Station. The total investment of the project is 27.508 billion yuan.

This line is located in the southeastern part of Jiangsu province and the northern part of Zhejiang province, and is an important part of the intercity railway network in the Yangtze River Delta. After the project is completed, it will connect the coastal development belt, riverside development belt and Shanghai-Nanjing development belt in the Yangtze River Delta region and running through the east of the Suzhou-Wuxi-Changzhou metropolitan area and the north of the Hangzhou metropolitan area. This project is of great significance for improving the travel conditions of Huzhou residents, integrating the space resources of the central city and towns along the line, improving the rail transit network around the Taihu Lake, and promoting the integrated construction of the Yangtze River Delta region. 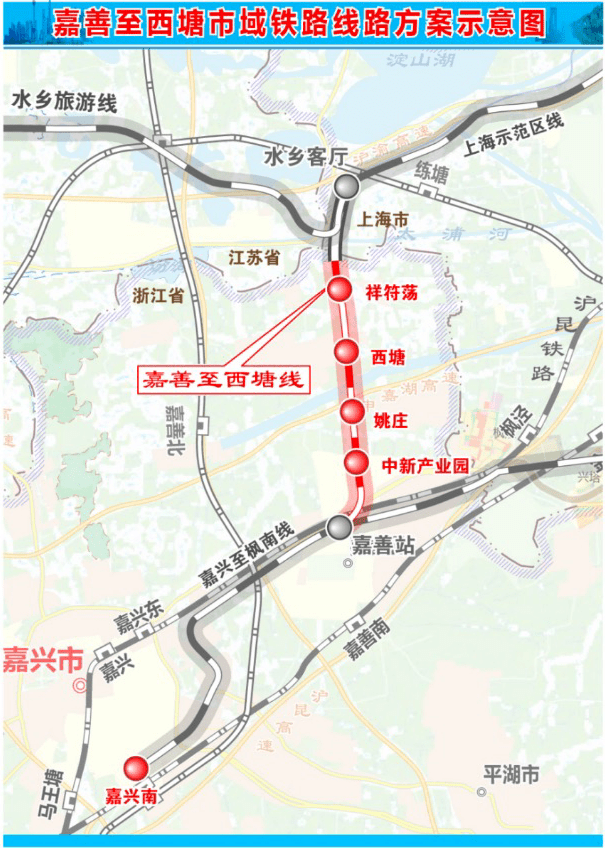 Jiashan-Xitang Municipal Railway is an important part of Shanghai-Suzhou-Jiaxing Intercity Railway, a symbol project of Yangtze River Delta Ecological Green Integration Demonstration Area. It starts from Jiashan Railway Station of Jiaxing-Fengnan Municipal Raiway, passes Sino-Singapore Industrial Park, Yaozhuang, Xitang, and ends at Taipu River, the border of Zhejiang and Shanghai. The total length of the line is 20.4 kilometers with the design speed of 160 kilometers per hour. Four elevated stations will be set including Sino-Singapore Industrial Park, Yaozhuang, Xitang and Xiangfudang stations.The total investment is 7.951 billion yuan.

After the project completed , Jiaxing will own a new rapid railway line connecting Shanghai Metropolitan Area, which can directly connect the Yangtze River Delta Integration Demonstration Zone and Hongqiao Business District. This will help promote the development and construction of towns along the line, and further strengthen the connection between Jiaxing, the demonstration zone and Shanghai. At the same time, it is conducive to building a regional multi-level rail transit system and accelerating the integrated development of the Yangtze River Delta.