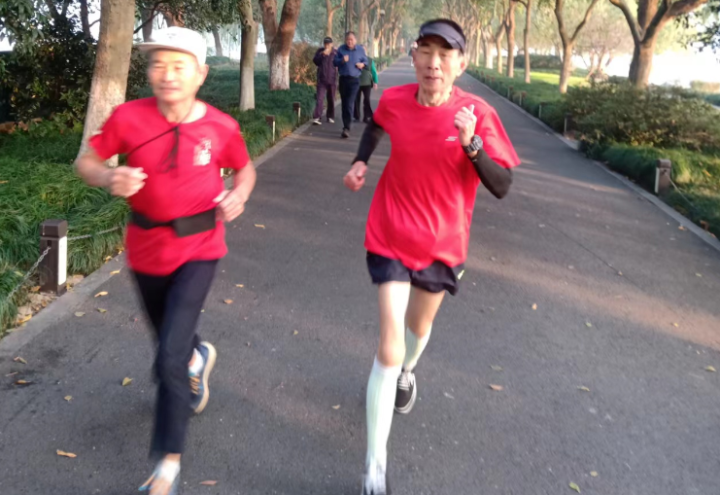 He is from Jinghui Community, Zhalongkou Street, Shangcheng District, Hangzhou, a runner who has 50 years of long-distance running experience and has participated in 43 marathons.

In 1987, Zhou Laida took part in the first Hangzhou Marathon. "I have participated in a total of 26 Hangzhou Marathons, some of which I didn't catch because I was away on business." Zhou Laida slightly regret. He said that he also participated in 43 marathons of different scales held in Beijing, Shanghai, Chengdu, Xiamen and other places, of which 3 were full marathons and 40 were half marathons. Zhou Laida's best half marathon time was around 1 hour and 28 minutes.

The 82-year-old Zhou Laida still insists on running at least 3 times a week, at least 15 kilometers each time. Long-distance running has become an essential part of his daily life.  "My day starts with running. If I run well, I feel refreshed throughout the day. If I'm not running comfortably, I'll be depressed all day." Zhou Lai said with a big smile.

When it comes to reasons for loving running, Zhou said, "When you're running, you can feel the real presence of your body. Breathing more and more sharply, legs and feet are sore and numb, arms can't even swing, every movement is a struggle. That's a kind of state you can't feel in everyday's life. Only if you have enough perseverance and insist running, will you slowly feel relaxed."

In the 50 years that Zhou has been running, he has broken more than 80 pairs of shoes. "Running does cost shoes." Zhou Laida said with a smile, "I really have to thank the 'nutritionist' at home for the past decades." Zhou Laida said his wife is very supportive of his hobby, and she has also learned nutrition in private, cooking him good food and supplementing his protein.

"I will keep on running and running is already a part of my life." Zhou said firmly. And when it comes to the Hangzhou Asian Games, he is also full of anticipation, "It's exciting to have such a grand sporting event at my doorstep. I would also like to contribute to it if needed."