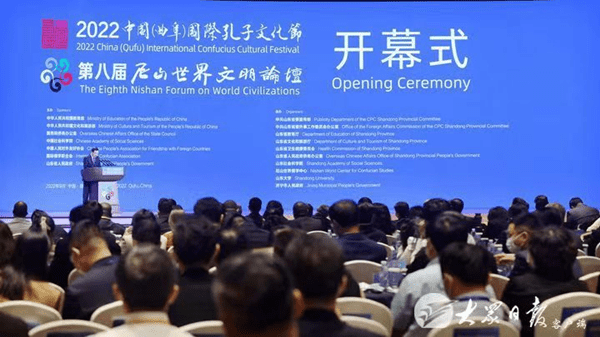 The opening ceremony for 2022 China (Qufu) International Confucius Cultural Festival and the eighth Nishan Forum on World Civilizations was held in Qufu, a county-level city in Jining, Shandong province on Sept 27, attracting more than 600 professors, experts and foreign envoys across the world to attend online and offline.

The Confucius thoughts, created by Chinese great thinker Kongzi 2,573 years ago, contributed greatly to the development of Chinese civilization and world civilizations, said Hu Heping, minister of Culture and Tourism of China, in a video during the ceremony. He added that the annual Nishan forum has played an important role in promoting Confucianism with a series of culture activities.

This year's forum, under the theme of "Diversity of Human Civilizations and Common Values of Mankind", focused on global common topics such as the protection of human cultural heritage, innovation and development of culture and exchanges of human civilization.

From the perspective of Confucianism, China would like to propose Chinese wisdom and solutions to build a community with shared future for mankind, Hu added.

Li Ganjie, Party secretary of Shandong, said in his speech that the fine Chinese culture and tradition provides rich content for the Chinese version of modernization.

As the home province of Confucius and an important source of Chinese traditional culture, Shandong will work hard to promote the creative development of fine traditional Chinese culture, create a highland for exchanges between civilizations and explore ways for culture inheritance to make contributions for promoting the common values of mankind, Li added.

"I subscribe to the world famous cultural giant Confucius whose birthplace the Nishan Forum on World Civilizations is named after and who believes in the equality and education of all people," Solomon Islands' Prime Minister Manasseh Sogavare said in a video at the ceremony, adding that the spirit of Nishan civilization is alive and active between Solomon Islands and China.

The eighth Nishan Forum on World Civilizations, which will last until Sept 28, features more than 40 activities, including keynote speeches, high-level dialogues and interviews with ministers and diplomats. The Nishan World Intellectual Businessmen Culture Forum was also launched for the first time.