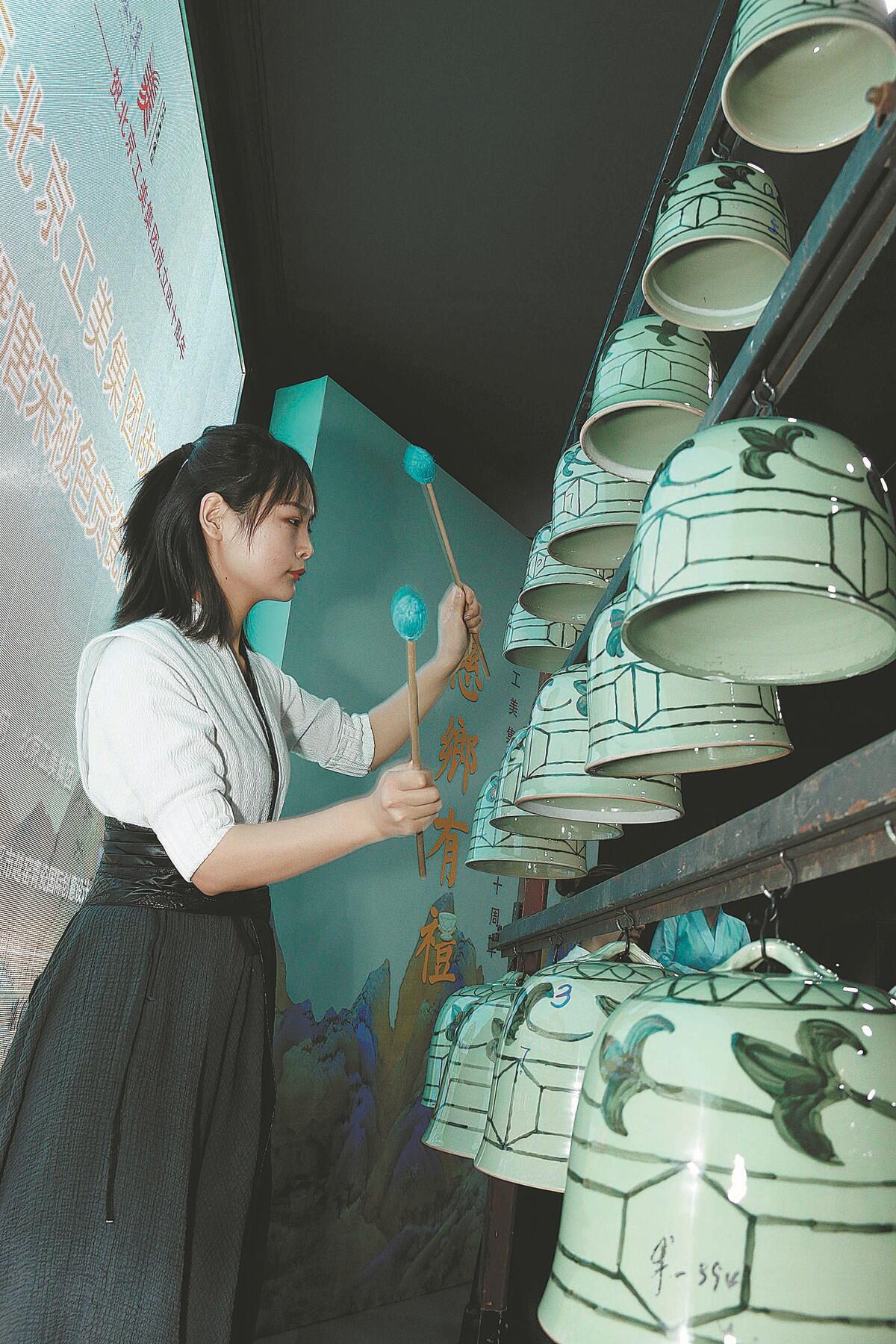 Chimes made from mise porcelain in Zhejiang province are displayed at an exhibition in Beijing. (Photo/CHINA NEWS SERVICE)

Porcelain, one of ancient China's oldest and greatest inventions, has played a significant role in the country's long history.

The word "porcelain" was probably first used by the celebrated traveler Marco Polo when he brought it from China to Europe in the 14th century and called it porcellana－the Italian term for cowry shell, which porcelain resembles.

The fact that porcelain is also popularly known as "china" or "fine china" in English speaks of the common recognition of its origins and identification with China.

By the late Paleolithic Age, Chinese people had already made pottery. Fragments unearthed from the Xianrendong Cave, or Cave of the Immortals, in Jiangxi province are believed to be the world's earliest pottery, dating back about 20,000 years.

Some 18,000 years later, with technological advancements, such as the use of raw materials, the molding process and firing techniques, the world's first high-fire ceramics, commonly referred to as "primitive porcelain" or "protoporcelain", emerged during the Shang Dynasty (c. 16th century-11th century BC).

Jiang Yu, director of the Department of Ceramics at the Zhejiang Provincial Museum, said these early protoporcelain items shared some basic attributes and properties with porcelain, including their hardness, glaze and low permeability, but they were not yet sufficiently refined to be recognized as porcelain.

"Compared with pottery, porcelain is made from a special type of clay," Jiang said. "The two are different in terms of raw materials, glaze and firing temperature. Porcelain is much tougher than pottery, as it has an extra layer of glaze and is more translucent."

In other words, protoporcelain was the stage during which pottery transitioned to porcelain. By the late Spring and Autumn Period (770-476 BC) and the early Warring States Period (475-221 BC), large quantities of protoporcelain began to be made in present-day Zhejiang province. These items were more affordable and more readily available than the bronze pieces of the day, which were preferred by most people.

The ruling class also liked protoporcelain. In 2004, some 500 musical instruments dating to the Warring States Period were unearthed from ancient tombs in Hongshan, Wuxi city, Jiangsu, including fou－percussion instruments whose existence was confirmed for the first time.

In 2007 and 2008, in Deqing county, Zhejiang, archaeologists unearthed seven kiln sites and excavated several metric tons of ritual vessels and musical instruments made of protoporcelain.

The discoveries included ding (cauldrons on tripods), zun (wine jars), bianzhong (sets of bells), goudiao (chime bells) and many other items documented in ancient records. The excavations and discoveries led experts to believe the items found in the Hongshan tombs had also been produced in Deqing.

Jiang said the discoveries show that northern areas of Zhejiang might have been a production base for high-quality protoporcelain, and that by this time, production techniques had advanced significantly.

However, it wasn't until the Eastern Han Dynasty (25-220) that porcelain in its modern form appeared. While pottery and protoporcelain were known to have been made in many places in China, porcelain, unsurprisingly, was first developed in Zhejiang.

In the 1970s, archaeologists excavated ceramic shards in Shangyu, Zhejiang, the quality of which was considerably better than protoporcelain. In the early 2000s, more items were dug up. These pieces have a gray or greenish ceramic glaze, and this type of porcelain is now popularly known as celadon, which dominated ceramics in China for a long period, thanks to its jade-like features.

Chen Wanli (1892-1969), a leading porcelain expert at the Palace Museum, once declared, "Half of China's history of ceramics lies in Zhejiang," pointing to the province's prominent position in the history and development of porcelain.

Production of porcelain－in particular celadon－developed further in Zhejiang and surrounding areas after the Eastern Han Dynasty.

According to Porcelain: The Story of China, written by Chen Kelun, a ceramics researcher from the Shanghai Museum, some of the most renowned porcelain kilns began to make their mark during the Tang Dynasty (618-907). One of them was the Yue Kiln, now known as the Yue Kiln Sites, a cluster of archaeological locations at Shanglin Lake, Cixi, Zhejiang.

Emerging in the Eastern Han Dynasty, the Yue Kiln reached its peak in the Tang Dynasty before declining in the Song Dynasty (960-1279).

These lines from a poem by the Tang poet Lu Guimeng describe the spectacular sight of porcelain being made at the Yue Kiln:

When the Yue Kiln opens in late autumn, the verdant celadon covers a thousand mountain peaks

This poem, Mise Ware (mise translates as "secret color"), is also the earliest known reference to the finest type of Yue celadon, Chen writes in his book. An artisan in Jinhua, Zhejiang, prepares to place pottery in a kiln. (Photo by YANG MEIQING/FOR CHINA DAILY)

The Zhejiang Provincial Museum is home to one of its most-treasured items－a piece of Longquan celadon made during the Southern Song period.

The piece, which is 16.7 centimeters long, 6.5 cm wide and 9.3 cm high, is a boat-shaped water dropper, a device commonly used in ancient China to put water on inkstones when grinding ink sticks.

Carved columns are on the left and right sides of the item, with a pavilion cabin in the center. A rolled-down shelter is at the back, with the anchor and oars also shown in vivid detail. Two passengers are positioned inside the cabin, as the boatman－standing outside and appearing to be preparing to moor the vessel－leans over to collect his bamboo hat from the roof. His robe flows in the wind.

Cai Naiwu, a ceramics expert at the museum, said, "This piece represents the height of Longquan porcelain-making, and shows just how exquisite and unique it is. The unearthed water droppers from the Southern Song Dynasty, or even later, are all different."

When the item was discovered in 1956, it was neither the result of archaeological excavations of major burial sites, nor found to be from any known imperial collections. Local farmers simply located the relic in a field and handed it to the authorities.

Cai said, "The Song Dynasty vigorously encouraged the development of culture, which reached unprecedented levels." Cai added that the boat-shaped water dropper is likely to have been custom-made for a member of the literati－a common practice at the time.

In September 2009, UNESCO inscribed the traditional firing technology for Longquan celadon on its Representative List of the Intangible Cultural Heritage of Humanity.

While it may not be among the four great inventions of ancient China－papermaking, printing, gunpowder and the compass－porcelain is an indisputably ingenious creation by the ancient Chinese that combines art and technology, and integrates aesthetics with practicality.

More important, it provides clues to China's past, Cai said, adding, "Thanks to its durability, porcelain can be likened to a chip that stores countless and invaluable information about China's history, society and culture."

For example, celadon was favored by the imperial Chinese court for a long time until the Yuan Dynasty (1271-1368), when blue-and-white porcelain came into vogue and its production base gradually shifted to Jingdezhen, Jiangxi, and elsewhere.

Cai said the Yuan rulers' tastes undoubtedly played an important role, but the changes they made were, to some extent, a conscious display of power, as they sought to exert themselves and eradicate the influences of the Southern Song Dynasty, their predecessor. Teapots are placed in a kiln in Wuyi county, Jinhua. (Photo by ZHANG JIANCHENG/FOR CHINA DAILY)

For centuries, people could only imagine the beauty of mise celadon, as they had to rely on limited information about it, such as a line of poetry comparing such items to "the moon dyed with spring water". The technique was then lost for more than 1,000 years and no such objects remained. Many people even began to doubt the existence of this mysterious type of porcelain.

However, in 1987, a total of 13 pieces of mise celadon were found in an underground palace at the Famen Temple in Baoji, Shaanxi province. Wrapped in silk, they were discovered in a lacquered wooden box hidden in the temple's treasure chamber. A stone tablet unearthed with the celadon－a record of items that Tang emperors offered to Buddha－bore the Chinese characters for "mise ware", revealing the items' identity.

Cai said important sources such as ancient works of poetry, calligraphy, painting and classical books help us understand the past, but the most realistic and convincing evidence lies arguably in cultural relics buried deep underground, especially porcelain from the great kilns, "which may have been broken but still looks like new."

After 160,000 porcelain relics, many of them intact, were recovered from the Nanhai One, a cargo ship believed to have sunk off the coast of southern China during the Southern Song Dynasty, experts thought they had found a "time capsule".

Cai said: "People often speak of the glory, the splendor, the cultural diversity and the booming trade and commerce of this dynasty. But how can you travel back 800 years and truly feel it? Now, with all the excavated porcelain, including items from the Nanhai One, a picture of time can be effectively pieced together for people to appreciate."

Jiang Yu, director of the Department of Ceramics at the Zhejiang Provincial Museum, said: "Our ancestors mastered the craft of producing porcelain, which has since been highly regarded, not only by the Chinese, but by people all over the world. It has become an indispensable part of culture, as well as part of people's everyday life."

This, perhaps, is where the true significance of porcelain lies. Pottery is removed from a kiln in Longquan city, Zhejiang. (Photo/CHINA NEWS SERVICE) A celadon jar from the Eastern Han Dynasty (25-220). (Photo provided to China Daily) A celadon sheep from the Eastern Jin Dynasty (317-420), which is made at the Yue Kiln. (Photo provided to China Daily)