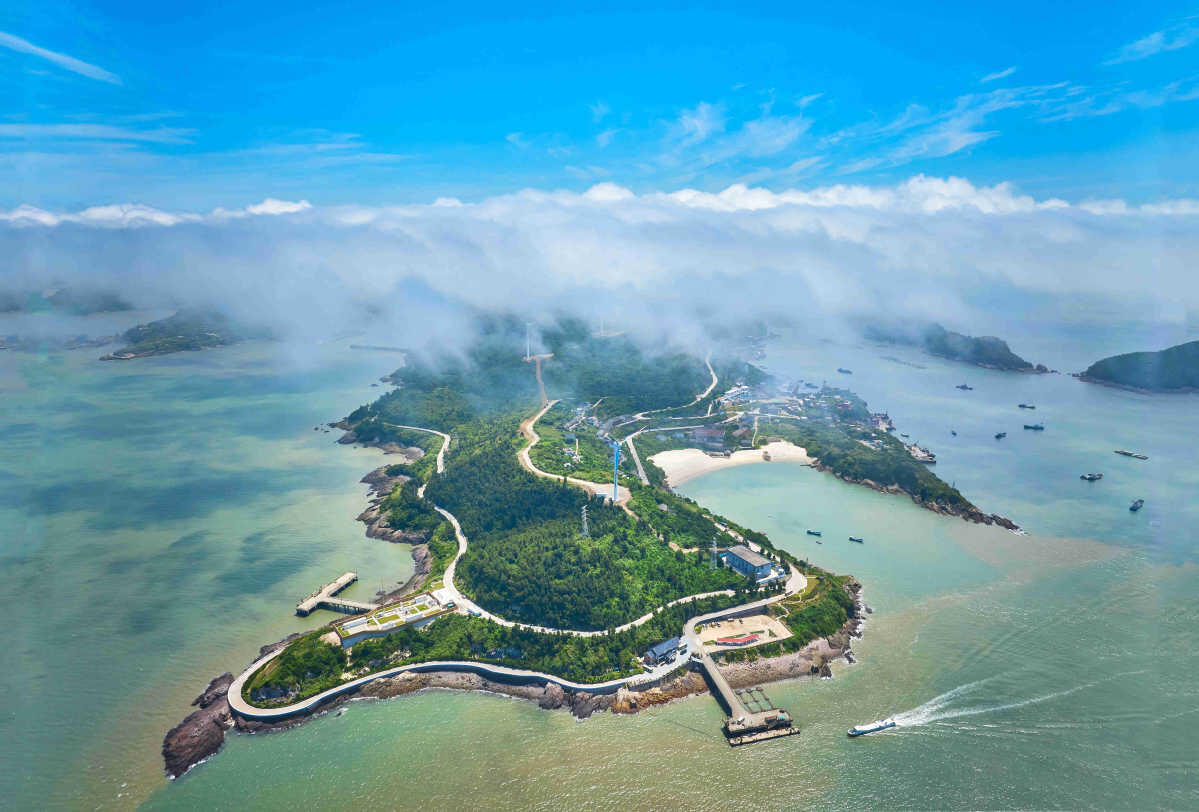 An aerial photo of the Dachen Islands in the East China Sea on Aug 30. (Photo/ CHINA DAILY)

Apart from turquoise waters, lush forests and mouthwatering seafood, many tourists are attracted to the Dachen Islands in the East China Sea by the promise of an all-electric hotel.

From cooking and lighting to heating and air conditioning, the Youjia Hotel is now entirely powered by electricity derived from renewable sources according to its owner, 60-year-old Shi Zhaorong.

"A one-night stay can save approximately 870 grams of coal," said Shi, who opened his homestay around five years ago. Administered by Jiaojiang district in Taizhou city, Zhejiang province, Dachen consists of two main islands.

Things were completely different before 2019. Most of Shi's homestay was powered by gas, which was stored in tanks and shipped to Dachen from Jiaojiang district, 50 kilometers away.

"When bad weather hit or gas stocks on the islands ran out, we were left without energy for cooking, bathing and lighting," Shi recalled.

In 2019, with support from the local power department, he began to switch to electricity from gas. "Electricity has not only improved the quality of our service but it has also reduced operating costs by 20 percent," he said.

The transition proved fruitful, prompting other homestays to follow suit. Currently, there are 17 all-electric hotels in Dachen, contributing to the development of the islands' zero-carbon transition.

Cutting carbon emissions is critical to achieving zero-carbon, but Dachen has gone further. Apart from its ubiquitous electric buses and shared bikes, tourists will also notice its 34 wind turbines, which generate more than 60 million kilowatt-hours of electricity on average each year.

The islands are rich in wind energy, with an average annual wind speed of 6.8 meters per second. A comprehensive hydrogen energy demonstration project also went into operation in July. It is able to convert the electricity generated by the turbines into stored hydrogen, and then turn the hydrogen into electricity and heat when needed.

"The project makes use of the abundant wind energy on the islands to electrolyze water and make hydrogen," said Zhang Chi, who works with the Taizhou Power Supply Company, which is part of the State Grid Zhejiang Electric Power. "There are no carbon emissions during the process, so it is high-tech and eco-friendly."

The hydrogen system can be understood as a kind of power bank. During peak electricity consumption or grid maintenance, the hydrogen is converted into electricity to meet demand, Zhang said.

"In the 1950s, a group of young people arrived on Dachen to cultivate barren land and now with the same indomitable spirit, the islanders are blazing a new path to make their home more eco-friendly and sustainable," said Wang Ning, an official in Dachen township.