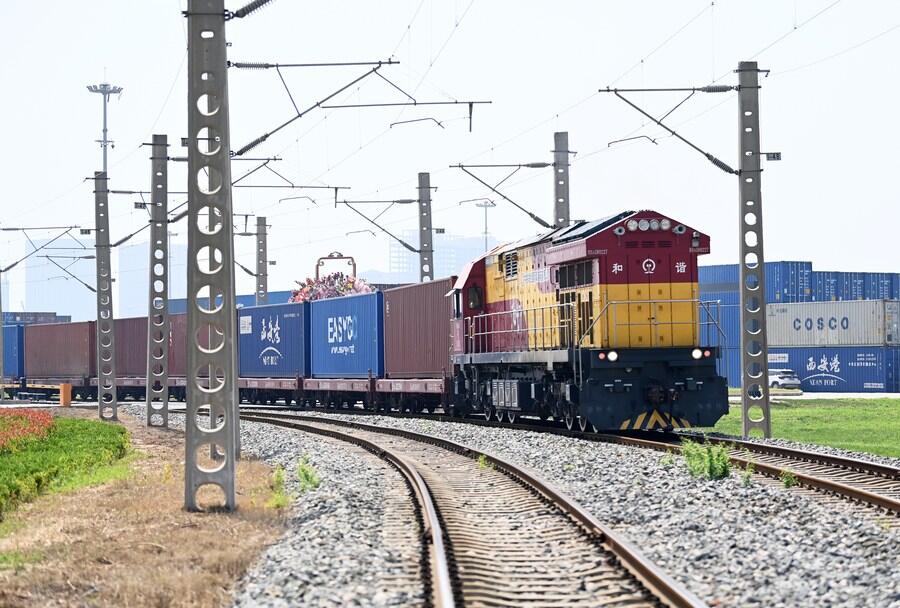 The Belt and Road cooperation, following the guiding principle of extensive consultation, joint contribution and shared benefits, has grown into a global platform where countries along the routes work together to promote people's wellbeing and give a further boost to global development amid daunting challenges.

This is how the Belt and Road Initiative (BRI), aimed at building a trade, investment, and infrastructure network that connects different regions along the ancient trade routes, took shape.

Nine years on, the BRI has achieved more than connectivity. The Belt and Road cooperation, following the guiding principle of extensive consultation, joint contribution and shared benefits, has grown into a global platform where countries along the routes work together to promote people's wellbeing and give a further boost to global development amid daunting challenges.

After years of Belt and Road cooperation, a general connectivity framework consisting of six corridors, six connectivity routes and multiple countries and ports have been put in place. Landmark accomplishments include the Mombasa-Nairobi Standard Gauge Railway in Africa, China-Laos Railway in Asia, the new Haifa port in Israel, and the China-Pakistan Economic Corridor, among others.

Besides infrastructure projects, a new logistics channel between Asia and Europe has been established through China-Europe freight train services. With 82 routes, the trains now reach 200 cities in 24 European countries, forming a transport network covering the whole of Europe.

Connectivity means fewer barriers, whether in terms of policy coordination, road travel, trade, financial flows or people-to-people exchanges. It also entails more resilience to uncertainties. The China-Europe freight train service acted as "a passage of life" when sea and air transportation was hit hard during the pandemic.

With such connectivity, the Belt and Road cooperation has scored growth despite global economic recessions. From 2013 to 2021, the total volume of trade of goods between China and countries along the BRI routes amounted to nearly 11 trillion U.S. dollars, while two-way investment exceeded 230 billion dollars, according to the Chinese Ministry of Commerce.

The BRI gives the Central Asian region an opportunity to fulfil the strategic task of direct access to seaports and turn the region into a transportation hub of transcontinental highways from east to west, and from north to south, Kyrgyz President Sadyr Zhaparov has commented.

A Chinese expert helps locals in mechanized harvesting of rice in the demonstration area of Nariou village in Burkina Faso, Oct. 8, 2021. (Xinhua)

In the eyes of Lewis M. Ndichu, a researcher at the Nairobi-based think tank Africa Policy Institute, one of the BRI's contributions to the African continent is on poverty alleviation and agricultural development.

China has set up poverty reduction projects, sent agricultural experts to Africa and facilitated modern agro-technology exchanges between the two sides, which is significant to regional development, he pointed out.

Burkina Faso is among the countries that have witnessed the changes brought by the BRI. Chinese experts have helped increase its rice production, which in the past could barely meet the population's needs.

With their assistance, rice production in the demonstration area, Nariou village, has doubled or even tripled the output in previous years, and the rice quality has also been significantly improved.

This is just a miniature of how the Belt and Road cooperation improves people's well-being around the globe. By the end of 2021, China has built 79 zones for economic and trade cooperation in 24 countries along the BRI routes, investing 43 billion dollars and creating 346,000 local jobs, according to China's Ministry of Commerce.

More projects that focus on the basic needs of people in developing countries are prioritized under the BRI framework. In Senegal, a rural well-drilling project, consisting of 251 wells and 1,800 km water pipelines that China had pledged to fund, has brought clean water to one-seventh of Senegal's population. While in Argentina, the photovoltaic plant in the country's northern province of Jujuy powers some 160,000 homes. The world today is undergoing a sea change amid a lingering COVID-19 pandemic, sluggish global growth, a changing climate and escalating tensions. Great strides have been made toward global prosperity, but the gap between the richest and the poorest countries continues to widen. Reducing destitution is not enough.

To improve equity and social justice, countries need to be equally entitled to development opportunities.

Upholding that spirit, the BRI offers an open platform and a win-win mechanism. By the end of July 2022, China had signed more than 200 BRI cooperation agreements with 149 countries and 32 international organizations, according to China's National Development and Reform Commission.

"Through the Belt and Road Initiative, it has therefore brought new thinking about development -- from being mere loan recipients to actual projects on the ground that bring development through trade and enterprises," said James M. Njihia, dean of the Faculty of Business and Management Sciences, University of Nairobi.

"This will have great multiplier effects in future by increasing local, regional and international integration," he said.

Echoing that view, Khairy Tourk, professor of economics with the Stuart School of Business at the Illinois Institute of Technology in Chicago, has said the China-proposed BRI puts developing nations on the right track to achieving their long-term development goals.

Infrastructure has not been the main focus of post-1945 multilateral institutions. "The BRI has drawn world attention to the importance of infrastructure as an essential pillar of economic development," Tourk said.

For decades, these countries couldn't modernize their antiquated infrastructure, he said. "Now China is providing them funds, the construction expertise to build modern infrastructure, and this is the basis for sustained development, and bodes well for the economic future of developing nations."