A Shared Future | Nation to drive growth of nonpublic sector 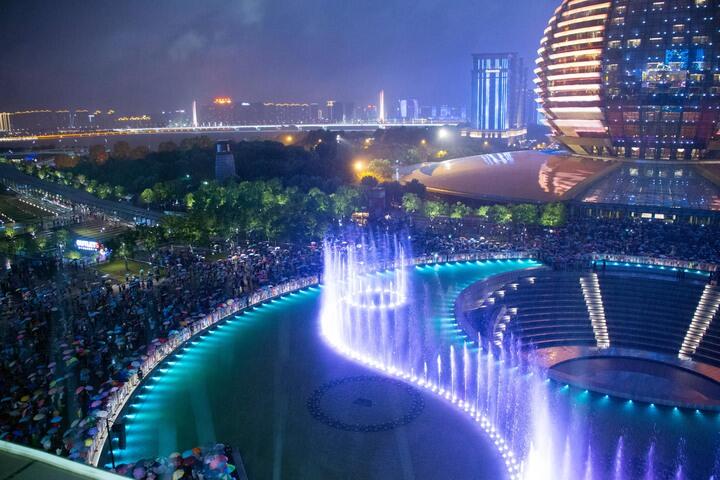 A night view of Hangzhou, capital city of Zhejiang. (Photo/IC)

Private firms contribute about 50 percent of the country's tax revenue, and 60 percent of GDP.

More efforts must be undertaken to drive the healthy development of the nonpublic sector and give full play to the dynamic role of private entrepreneurs so they will dare to make breakthroughs, China's top leadership said in recent high-level conferences.

The emphatic declaration spoke of China's strong determination to develop the nonpublic sector. Industry experts and company executives said will greatly stimulate market vitality and support stabilizing the nation's economic fundamentals in the second half of the year.

President Xi Jinping said at the Central Conference on United Front Work in late July that China must facilitate the healthy growth of the nonpublic sector of the economy and encourage those working in this field to achieve success.

"It demonstrated that the country is striving to offer a stable and predictable business environment for nonpublic sector, especially private businesses, which is of great significance in boosting their confidence and stabilizing expectations," said Zhang Lianqi, a member of the Standing Committee of the 13th National Committee of the Chinese People's Political Consultative Conference.

"With better market expectations, more companies and entrepreneurs will move boldly for their business. This, in turn, will drive economic recovery as well as the steady development of sectors like real estate and the platform economy," he said.

A recent meeting by the Political Bureau of the Communist Party of China Central Committee said that full play should be given to the initiative of enterprises and entrepreneurs, and that sound policies and a favourable institutional environment must be provided so that "State-owned enterprises dare to act, private enterprises dare to develop into new areas and foreign enterprises dare to make investments."

Yang Weimin, deputy director of the Economic Affairs Committee of the CPPCC National Committee, said in a note that the country's economy is on track for recovery, although there are many uncertainties ahead because of the COVID-19 epidemic and the external environment.

"To stabilize economic growth in the second half of this year, we cannot ignore market entities. More efforts must be made to power private enterprises, which act as the main body of economic development," he said.

China's private businesses, which accounted for over 97 percent of the country's total market entities last year, are a primary driver behind the country's economic development.

From small private businesses in provinces like Zhejiang and cities like Shenzhen to internet enterprises leading global technological advances, China's private companies are pioneers in spurring economic growth and innovative development both inside the country and on the global stage.

They have contributed about 50 percent of the country's tax revenue, 60 percent of gross domestic product, 70 percent of technological innovation and 80 percent of urban employment, according to the Ministry of Industry and Information Technology.

Industry experts said the ultimate goal of encouraging various market entities, including the nonpublic sector, is to drive the country's common prosperity and Chinese-style modernization.

In an inspection tour that started last week in Jinzhou, Liaoning province, President Xi reiterated the essential features of China's modernization. Xi said that "Chinese-style modernization features common prosperity and happiness for all, not just for a few."

"China has put common prosperity in a more important strategic position in the new era to drive Chinese-style modernization," Bai Chongen, dean of Tsinghua University's School of Economics and Management, said in an article published in Economic Daily.

To achieve this, Bai said that the nation is insisting on a socialist market economy in which public ownership plays the leading role alongside other forms of ownership, to allow some people to get rich first and help others get rich later.

"But during this process, China is also boosting antitrust efforts to prevent the disorderly expansion of capital, so as to drive enterprises equally for common prosperity," he said.

Ye Qing, chairman of Beijing Yeshi Enterprise Group Co, a material manufacturing company, said that as a private entrepreneur, he felt inspired and assured by China's efforts in supporting the private sector to go boldly for development.

"It has definitely been a hard time due to rising operational costs and shaky external uncertainties, but the country's recent efforts greatly boosted our confidence and inspired us to turn policy opportunities into growth momentum," Ye said.

"Such efforts also drove us to give more important play to the dynamic role of private enterprises to make more contributions to the Chinese market, especially in insisting on research and development for more breakthroughs on key technologies," he added.