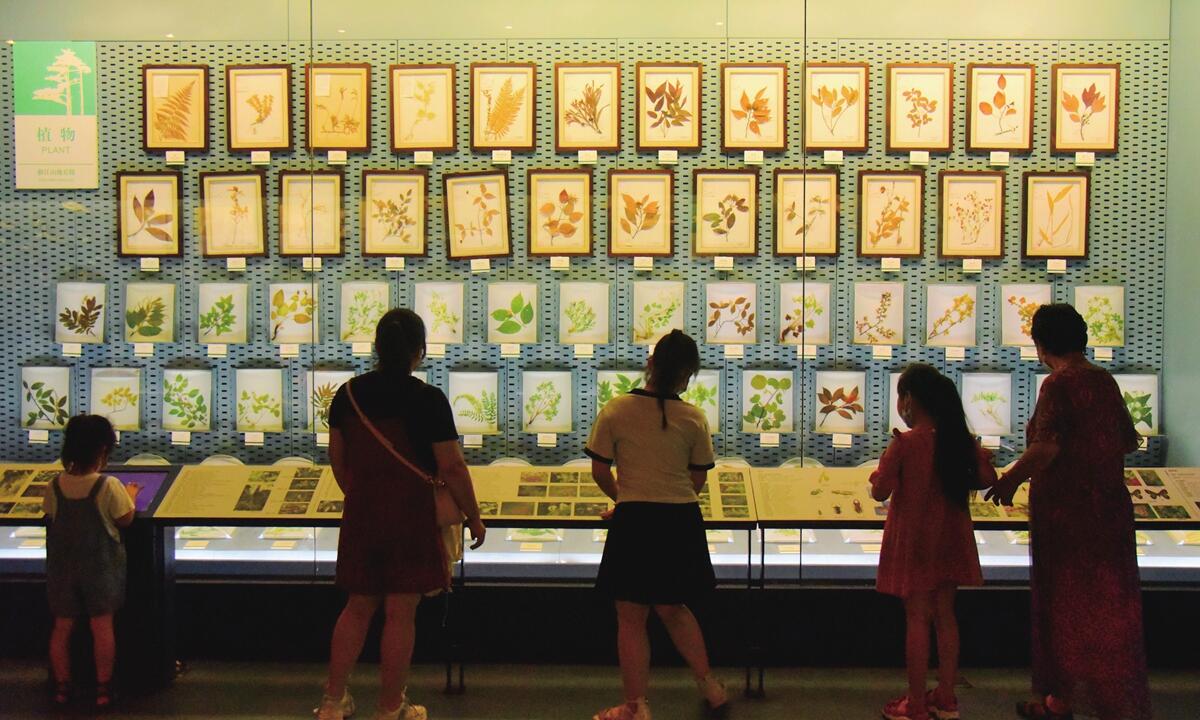 Parents and children look at a night exhibition of plants at the Zhejiang Museum of Natural History on July 6, 2022. (Photo/VCG)

The Chinese government has been placing greater emphasis on the role of museums over the past few years. In a letter to senior experts at the National Museum of China on the occasion of its 110th anniversary on July 8, 2022, Chinese President Xi Jinping stressed that museums, which are important places that protect and pass on human civilization, as well as bridges that link the past, present, and future, play a special role in promoting exchanges and mutual learning between world civilizations.

In keeping with this spirit, Chinese museums have started exploring new ways to better carry out their mission, such as holding events at night.

Entering the summer, a diverse range of museums around the country have been extending their opening hours to late at night, some even staying open for a full 24 hours, so people get to see a different side of their collections.

At night, museums have a very different atmosphere compared with daytime as they present a quieter and visually distinct experience. This special experience is an extremely attractive proposition for the public, Chen Lüsheng, a former deputy president of the National Museum of China.

Chen said that museums should first consider the needs of the public when innovating.

"Any innovation that can bring in the public and can be accepted by the public should be considered a success."

Located in Hangzhou, the Zhejiang Museum of Natural History has transformed a 310-square-meter room into a 24-hour cultural space that will remain open through August. The venue has proven so popular that the museum had to limit entry to 100 people per hour in order to maintain the quality of the experience, according to a Guangming Daily report.

The 24-hour space has a number of interactive exhibits such as pressing buttons under specimens of birds to listen to their distinctive sounds, and a metaverse theater for screening online exhibitions, so that visitors of all ages can enjoy themselves.

Yan Hongming, head of the museum, said that the all-day space provides parents with a cultural venue where they and their children can enrich their cultural lives after work.

Many museums in other regions around China including Central China's Henan Province, Southwest China's Guizhou Province and East China's Jiangsu Province and cities such as Shanghai have also decided to join the nightlife crowd.

With the arrival of summer vacation for students, Beijing municipal government announced that from July 12 the capital's museums could extend their opening hours too late at night just as they did during certain holidays in 2021.

For instance, the opening hours for the Ancient Bell Museum in the Haidian district were extended to 7:30 pm during the Spring Festival holiday in 2021 and three ancient chime performances were held for visitors each day.

These activities have captured the attention of young Chinese. On the Chinese social media platform Little Red Book, threads sharing strategies for taking night tours at the museum earned more than 10,000 posts.

"I've been to several museums at night and the one that impressed me the most was a museum in Suzhou, [Jiangsu Province]," Yan, a 32-year-old museum lover said.

The night tours in museums offer spectators a more spiritual experience that helps them get more interested in the origins of the items on display, which is one of the most significant functions of museums, say experts.

"Disseminating cultural knowledge is one of the major responsibilities of museums. To some extent, a night museum is a flexible cultural organ that caters more to certain groups, especially in urban cities where many people are not free during normal visiting hours," Peng Xingxing, a museology researcher said.

"Museums in China are celebrated by many young visitors, especially educated working adults who are willing to pay for culture. If a museum only opens during work, how can people still maintain their passion for culture? Therefore, night museums are a strategy to offer better services to loyal consumers," Peng noted.