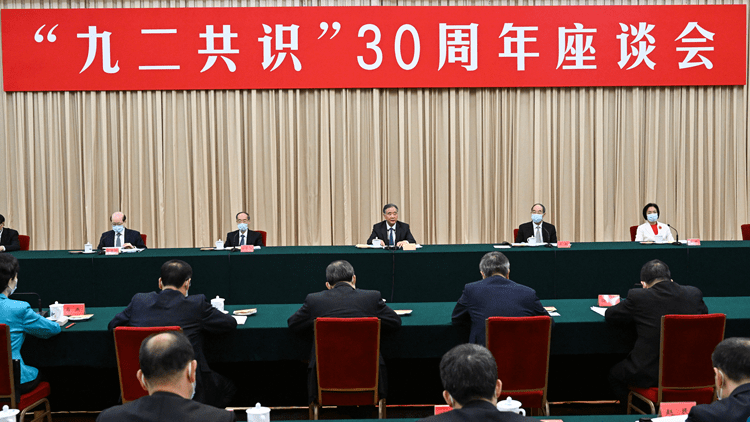 Cover photo: Wang Yang, member of the Standing Committee of the Political Bureau of the Communist Party of China (CPC) Central Committee and chairman of the National Committee of the Chinese People's Political Consultative Conference, speaks at the 14th Straits Forum in Xiamen, China's Fujian Province, July 13, 2022. (Photo/Xinhua)

China's top political advisor Wang Yang on Tuesday stressed the importance of upholding the one-China principle and the 1992 Consensus and called for jointly striving to achieve the reunification of the motherland.

Wang, a member of the Standing Committee of the Political Bureau of the Communist Party of China (CPC) Central Committee and chairman of the National Committee of the Chinese People's Political Consultative Conference, made the remarks in Beijing while addressing a meeting marking the 30th anniversary of the 1992 Consensus.

Promoting the peaceful development of cross-Strait relations and advancing the process toward peaceful national reunification is a shared aspiration of all the sons and daughters of the Chinese nation, and the CPC's basic proposition on resolving the Taiwan question, Wang said.

The 1992 Consensus defines the fundamental nature of the cross-Strait relationship, and lays the political foundation for its development, he said.

By adhering to the 1992 Consensus and endorsing the one-China principle, cross-Strait relations will improve and develop, and compatriots in Taiwan will benefit, he said. Denying the 1992 Consensus and deviating from the one-China principle will lead to tension and turbulence in cross-Strait ties, and that will undermine the vital interests of Taiwan compatriots, he added.

"We will strive toward the prospect of peaceful reunification with utmost sincerity and greatest efforts," Wang said.

"On the basis of adhering to the one-China principle, we are willing to engage in dialogue, communication, and democratic consultations with all parties, groups, or individuals in Taiwan regarding political issues between the two sides and the promotion of peaceful reunification of the motherland," he stressed.

Secessionist activities aimed at "Taiwan independence" are the greatest obstacle to national reunification and a grave danger to national rejuvenation, he said.

The Taiwan authority's denial of the 1992 Consensus, along with certain countries' connivence and instigation of the secessionists' provocation, will only plunge Taiwan into catastrophe, and cause misery for the Taiwan people, Wang said.

He warned that no individual and no force should underestimate the resolve, the will, and the ability of the Chinese people to defend their national sovereignty and territorial integrity.

He called on Taiwan compatriots to gain a deep understanding of the benefits of reunification, as well as the fact that "Taiwan independence" leads to a dead end and that outsiders are not reliable.