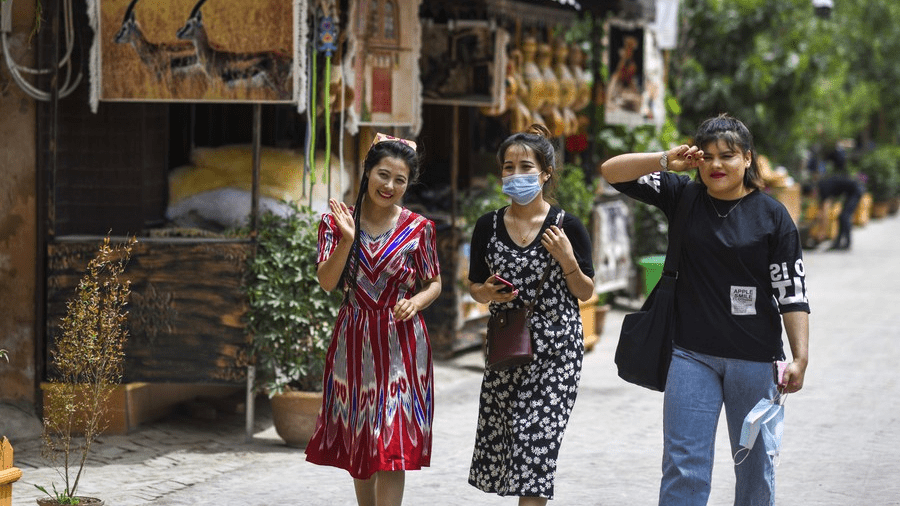 Local residents walk in a street at a scenic spot in the ancient city of Kashgar, northwest China's Xinjiang Uygur Autonomous Region, May 16, 2020. (Photo/Xinhua)

Chinese and foreign scholars at a seminar on Tuesday said that China, as a unified multiethnic country, safeguards ethnic minorities' various rights by law and has made important contributions to the development of the international human rights cause.

The seminar, a side event of the 50th session of the United Nations Human Rights Council, was attended by 18 representatives from seven countries.

China stays committed to acting in accordance with the law and using the law to protect the legitimate rights and interests of ethnic minorities, said Pan Hongxiang, deputy head of the China Ethnic Minorities' Association for External Exchanges and dean of the school of law at South-Central Minzu University.

China adheres to the principle that all ethnic groups are equal, and has established a relatively complete system of laws and regulations to protect the human rights of ethnic minorities, said Ye Bo, executive vice secretary-general of the China Ethnic Minorities' Association for External Exchanges.

Representatives of experts and overseas students from Britain, Kyrgyzstan, New Zealand, and Rwanda lauded China's practices in protecting the rights of ethnic minorities in accordance with the law based on their personal experiences and feelings in China.