China was able to enhance its capacity to provide seafood to its people in 2021 thanks to the continual development of deep-sea aquaculture and the construction of marine ranches, according to a statistical communiqué recently released by the country’s Ministry of Natural Resources.

“We have 280 net cages and only 20 employees at the marine ranch who are responsible for farming 14 million kilograms of fish this year,” said Fan Pengbo, an executive from Luhaifeng Group, the developer of the marine ranch. 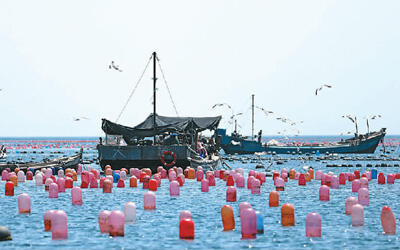 Marine ranches are created by installing artificial structures that provide spawning grounds and habitats for marine organisms through measures such as releasing fish fry and eco-friendly mariculture in designated sea areas to improve the marine environment and realize the sustainable use of fishery resources, introduced Yang Hongsheng, a researcher from the Institute of Oceanology under the Chinese Academy of Sciences.

“The construction of marine ranches is by no means equal to placing artificial reefs and releasing fish fry. Marine ranches aim to provide high-quality, safe and healthy aquatic products while protecting the marine environment and fishery resources,” Yang said.

China aims to build 200 state-level marine ranch demonstration zones by 2025, according to a plan issued in 2017. The country’s first national standards on marine ranch construction came into effect on June 1 this year.

At present, China has built 153 state-level marine ranch demonstration zones in the Yellow Sea, the Bohai Sea, the East China Sea and the South China Sea.

Marine ranches help increase fishermen’s income. A marine ranch called Changjing No. 1, situated near the Daqindao township off the coastal city of Yantai in Shandong Province, has generated much wealth for local fishermen.

Chen Degang, an executive at the marine ranch, introduced that after the marine ranch’s net cages and aquaculture platforms were put into use, the marine ranch signed contracts with local farmers to purchase fish fry raised by them according to relevant standards, thus realizing win-win results.

According to Li Chuanqiang, director of the Yantai Municipal Marine Development and Fishery Bureau, marine ranches – which mainly specialize in deep-sea aquaculture – are committed to pursuing win-win cooperation with individual fishermen and driving the development of the fishery industry.

In Yantai city, some competent marine ranches have guided fishermen to establish cooperatives. So far, there are 300 fishermen’s cooperatives in the city, helping over 20,000 households increase their incomes.

Besides, marine ranches drive the development of the fishery, leisure, tourism, culture and other sectors. Surveys show that the direct economic benefits generated by a marine ranch hit about 7,000 yuan (about $1,049) per mu (about 0.07 hectares) each year, and each fishing boat can create an additional annual income of 50,000 yuan to 80,000 yuan thanks to leisure activities. Marine ranches have also boosted the development of relevant industries, such as catering, tourism, transport, retailing, handicrafts, and business investment.

In addition to developing mariculture with a high level of efficiency, marine ranches play an active role in protecting biological resources and improving the ecological environment.

After the construction and operation of marine ranches in Wudi county, Binzhou city, Shandong Province, the proportion of good quality offshore waters in the county has risen to 88.9 percent, and the number of bird species in the Beikedi island and wetland national nature reserve in the county has increased to 230 from a count of 45 when the reserve was first established.