Queen of the button empire: China's legend of female empowerment

Punctilious and humble, 61-year-old Zhang Huamei is not the most appealing of characters at first glance. In her face, one discerns a sharp blend of the mildness of an ordinary Chinese housewife and the sophistication of a persistent businesswoman forged by decades of commercial endeavors.

China’s economic miracle started with her: she was the nation’s first licensed private business vendor after the reform and opening-up policies were adopted 44 years ago. In the past decades, she has founded a business empire selling buttons in her hometown of Wenzhou. She, along with other local business leaders, now produce over 60 percent of the world’s buttons.

“My life is like a button: small, but not insignificant. A tiny button can make a big difference on clothes, an ordinary woman like me can also take the lead in the business arena,” said Zhang.

An arduous path to success 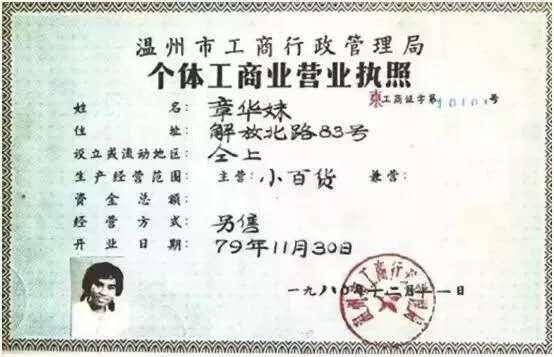 Zhang Huamei's business permit shows that her shop opened on November 30, 1979. She was the first individual in China to establish a private enterprise. （Photo provided by Zhang Huamei）

“I dropped out of elementary school because of poverty. I was born into a family with seven kids, and I had to find a way to survive, and doing business was the only option then,” said Zhang.

Following her neighbors, the teenaged Zhang became a street vendor selling small commodities such as buttons, memorial medals and watch straps. She could only make one or two yuan per day, but that was almost enough to meet the entire family’s daily expenses.

Zhang’s biggest fear back then was that she might be detained for conducting “speculative activities.” Back in the 1970s, the term “businessman” was equivalent to “petty criminal” in China, as the country strictly forbade private-owned businesses, even if this so-called “business” was nothing more than an outdoor table piled with knick-knacks like buttons and zippers.

“I had to endure contempt and fear as a business owner. Society looked down on people like us, and I had to set up my stall outside my house, so that when the officials came, I could wrap up everything and flee as fast as I could,” she said.

Zhang had no idea that a dramatic transformation was on its way and that she would soon be jumping on the bandwagon to become China’s first entrepreneur. In 1978, the debate on whether the country should adopt private business ownership was heating up. It was eventually settled in the affirmative in December at the Third Plenary Session of the 11th Central Committee of the Communist Party of China.

Hearing the news, Zhang quickly applied for a business license by submitting her personal information, two photos and a description of her business. In 1980, she became the first of more than 2,000 vendors in Wenzhou to be approved, and went on thereafter to upgrade her table-shop into a one floor store. The buttons that she sold were now displayed on counters.

“I felt really relived when I received my license. With a legal paper in my hand, I was no longer a speculator, and my children would not be teased because of my occupation,” said Zhang.

In the years that followed, Zhang tried her hand at a number of different businesses, but buttons have always been the heart of her enterprise. She came to the brink of bankruptcy twice, once when her brother was badly injured and she had to cover the medical bills, and the other when an unsuccessful investment in leather shoes incurred tens of thousands of yuan in debt, a devastating amount at that time.

The twists and turns of her business ventures have turned Zhang into an astute businesswoman. She founded her button empire in 2000, with 200 square meters of shop floor in Wenzhou’s commercial center, along with design, sales and stockpile divisions in addition to several assembly lines. She makes millions of yuan in revenue every year, and has become a legend and role model for women in China with dreams of making it big in the world of business.

In 2019, Zhang decided to retire, handing over her business empire to her son. She kept nothing but her license, along with her memories as a shy girl who witnessed China’s rapid economic development and progress over the course of 40 years.

“After all, we are all small buttons, but don’t forget, buttons will always be needed and will always have their place on clothes,” added Zhang.

The right to become a successful woman

"Being a woman is hard, but being a successful businesswoman is even more difficult. If you ask me what a fundamental human right is, I would say the right to equal opportunities and success regardless of gender," Zhang said.

"I've seen China's progress toward gender equality firsthand, and I'm one of the lucky ones to be a beneficiary of it. I believe Chinese women can compete with and even outperform their male counterparts," she said.

In Zhang's hometown, where China's female commercial empowerment began, over 326,000 female business owners were registered in 2020, stimulating growth in the so-called "She-economy" and resulting in the emergence of numerous business streets and shopping malls with a "Woman power" motif. Female business leaders have also formed business alliances to assist young women in realizing their entrepreneurial dreams and pursue their desired careers.

“It’s not your gender but your talent that makes you a successful business leader in China. Prepare for the best, seize the moment, and at the right time, press the right button,” she said.