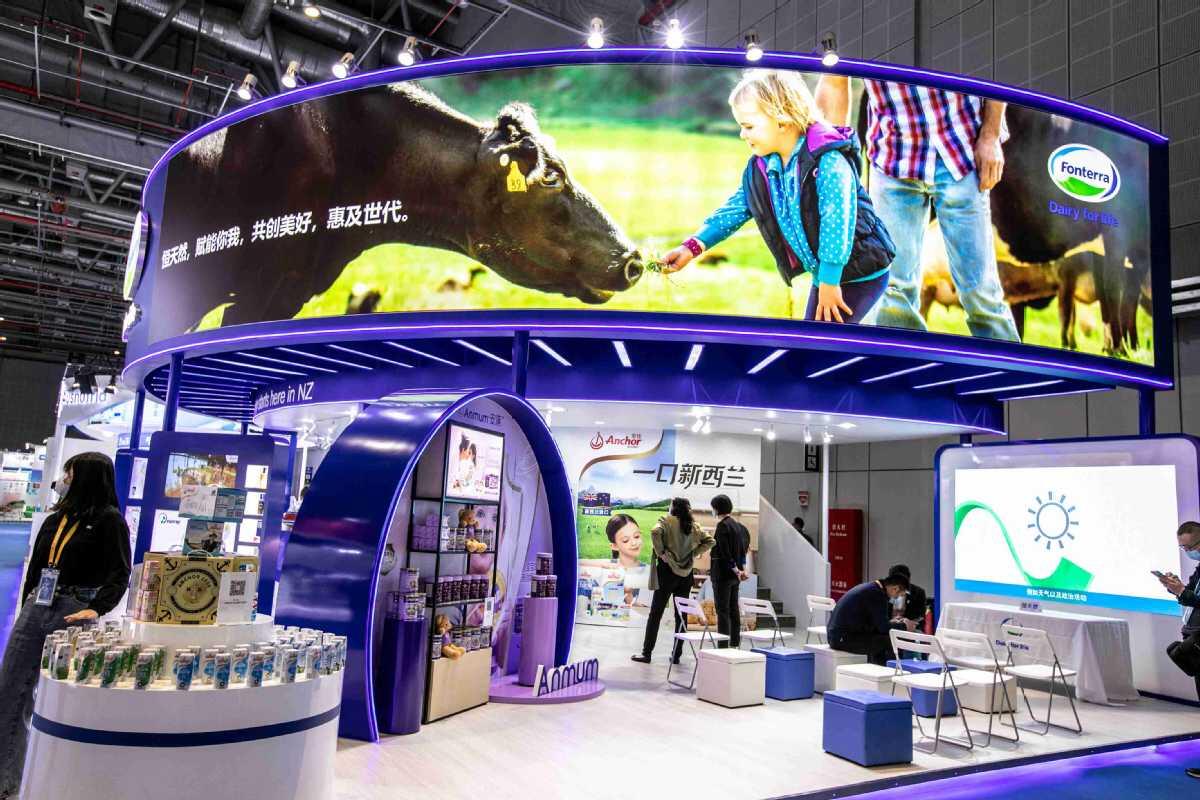 The booth of Fonterra, New Zealand's top dairy producer, during an expo in Shanghai. (Photo/China Daily)

The Upgrade Protocol of the China-New Zealand Free Trade Agreement will further cut tariffs and non-tariff barriers, enhance cooperation in rule-making and boost trade in services between the two countries, said trade experts and business leaders.

They made the remarks after China and New Zealand officially implemented their upgraded FTA on Thursday, sending a clear signal that the two sides are willing to enrich their business connections, fight the COVID-19 pandemic, and support multilateralism.

In addition to facilitating goods trade, the bilateral deal has added four new chapters, namely e-commerce, competition policy, government procurement, environment, and trade. They are more in line with the needs of modern economic and trade development, said China's Ministry of Commerce in a statement posted online on Thursday.

Regarding trade in goods, the new protocol will see both countries open their markets for certain wood and paper products and optimize trade practices such as rules of origin, technical barriers to trade, and Customs facilitation.

"Business communities on both sides should take advantage of the favorable conditions of market opening to expand trade in both goods and services, and two-way investment," said Xu Ningning, executive president of Beijing-based China-ASEAN Business Council and chairman of the RCEP (Regional Comprehensive Economic Partnership) Industry Cooperation Committee in Beijing.

"Government departments and industry associations should better align bilateral industrial cooperation to give full play to the role of existing corporation mechanisms, such as the China-New Zealand Joint Trade and Economic Commission, and establish new industry cooperation mechanisms based on the needs of economic growth and cooperation," Xu said at a forum held by the RCEP Industry Cooperation Committee on Thursday.

Zhang Yongjun, deputy chief economist at the China Center for International Economic Exchanges, said they should also jointly reinforce cooperation in pushing regional economic integration, and gradually advance cooperation in the RCEP signatory economies in the areas of digital economy and green economy, as well as regional connectivity.

Facilitated by closer business ties and their complementary trade structure, foreign trade between the two nations soared 36.4 percent year-on-year to $24.72 billion in 2021, about 5.6 times the level recorded in 2008, data from China's Ministry of Commerce and the Chinese embassy in New Zealand (Cook Islands and Niue) showed.

In another statement released by the ministry on Thursday, the head of the ministry's department of international trade and economic affairs said the upgrade protocol further improves access to the Chinese market for New Zealand exports and reflects the new trends of trade and business models between the two countries.

"We are encouraged by the progression of a strong trading relationship between New Zealand and China," said Teh-Han Chow, CEO for Fonterra Greater China.

As the trading relationship has flourished between the two nations, Chow said it was with great foresight that both countries saw a need to upgrade their FTA.

"With the upgrade, we will see closer cooperation between the two countries across a number of areas for decades to come. In an era where we are seeing pockets of protectionism pop up around the world, it is refreshing to see China and New Zealand continue to take leading steps toward free trade," he said.

The China-New Zealand FTA was signed on April 7, 2008, and entered into force on Oct 1 of the same year. The two countries began negotiations on upgrading the FTA in November 2016, and officially signed the Upgrade Protocol on Jan 26, 2021, according to the Ministry of Commerce.