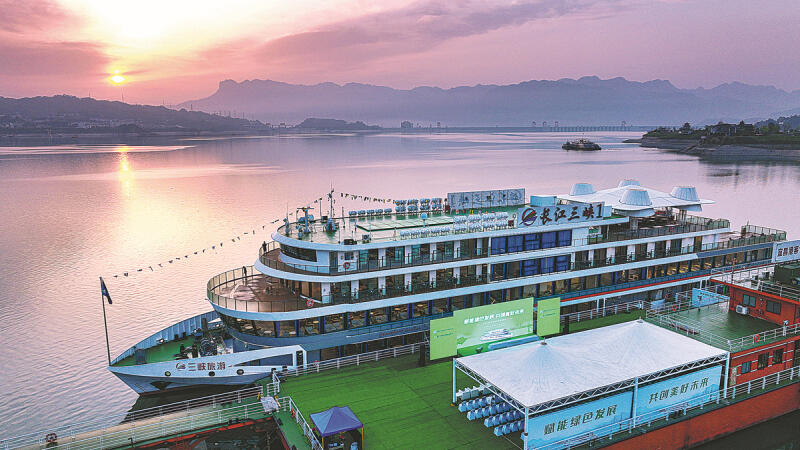 The Yangtze River Three Gorges 1, the world's largest electric cruise ship, which was built by China, waits to set out on its maiden voyage in Yichang, Hubei province, on Tuesday.(Photo by Shao Yong/China Daily)

The ship, which is 100 meters long and 16.3 meters wide, can accommodate 1,300 passengers and will mainly be used for Yangtze River sightseeing trips near Yichang.

The ship is a project sponsored by the Ministry of Industry and Information Technology and the Ministry of Transport in a bid to tap clean energy and green transportation.

With an investment of 150 million yuan ($23.5 million), the ship was developed by China Yangtze Power, a subsidiary of China Three Gorges Corp, and Hubei Three Gorges Tourism Group. Other leading ship manufacturers and research institutes including China Shipbuilding Industry Corp and Beijing University of Technology also participated in research and development.

Zhang Xingliao, general manager of China Yangtze Power, said the ship generates zero pollution and zero emissions, as it is powered by clean hydropower electricity from the Three Gorges Dam.

The project developers also managed to reduce the equipment failure rate and operation and maintenance cost by equipping the ship with an automatic control system and intelligent power management system, he added.

Lei Mingshan, chairman of China Three Gorges Corp, said at the ceremony to launch the maiden voyage on Tuesday morning that the ship is a milestone in promoting green transportation, the protection of the Yangtze River and a low-carbon future.

He said the corporation will take the maiden voyage as a starting point for increasing investment in the zero-carbon industry in the Yangtze River basin.

Cheng Lu, a passenger from Wuhan, the capital of Hubei, said the ship sailed very smoothly and she "couldn't feel it moving".

Chen Guohai, the captain of the ship, said he has been sailing ships for more than 20 years but this was his first time to maneuver an electric ship. As the ship's first captain, Chen said he has gone on several trial voyages and had to sail out every day for the past month for testing.

As an experienced captain on conventional ships, Chen, 46, said that handling the electric ship felt different, as its operation is more flexible and all systems are controlled by computers.

"Before, I used my own experience to determine if any equipment went wrong. Now it is all monitored by computers. For problems regarding electricity consumption and battery endurance, there are data for comparison and automatic control," he said.