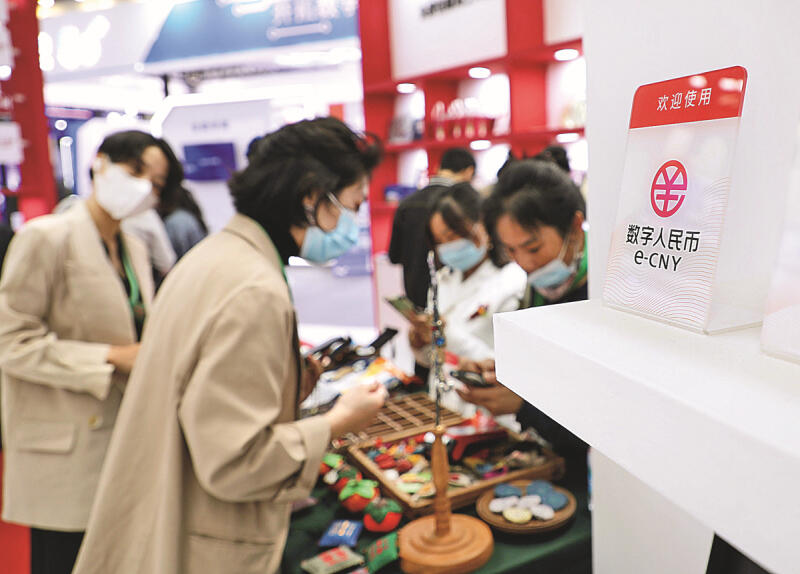 Digital RMB is accepted in payment during an expo in Suzhou, Jiangsu province, in October. (Photo by Yang Haishi/China Daily)

More digital renminbi trials are expected this year, including some in Zhejiang province, as part of China's efforts to build a robust ecosystem for its digital currency, experts said on March 25.

On March 24, the People's Bank of China, the country's central bank, said it will make solid efforts to advance the research and development of the digital renminbi－e-CNY－and expand the scope of digital renminbi trials in an orderly manner.

The PBOC will continuously improve the design and use of the digital yuan and gradually establish the relevant management framework, the central bank said in a statement on March 24.

The statement sent stocks of A-share companies related to digital currency soaring in morning trading on March 25. But, they retreated later. For instance, shares of Sinodata Co Ltd, a Shenzhen-listed provider of blockchain and financial technologies, increased by the daily limit of 10 percent to close at 15.40 yuan ($2.42).

Areas relating to the 19th Asian Games to be held in Hangzhou, Zhejiang province, in September should be among the new pilot scenarios and allow foreign visitors to use the e-CNY, Dong said.

So far, China has released two batches of e-CNY trial regions and made the digital yuan accessible in 10 Chinese cities, including Shenzhen, Guangdong province, Shanghai and Chengdu, Sichuan province, as well as the venues of the Beijing 2022 Winter Olympics.

There has been market talk about e-CNY this year as more and more regions declared their ambition to pilot digital renminbi services as part of their efforts to boost digital finance.

The PBOC and the other authorities concerned released a guideline last week that said they will support qualified areas in Zhejiang province to launch e-CNY pilots.

The provincial financial regulator said in January it will pilot e-CNY services in scenarios related to the 19th Asian Games and support local areas to apply for piloting the digital renminbi.

Experts said introducing more trials will help in testing the functioning and security of the e-CNY more thoroughly and also in exploring more ways to incentivize consumers and financial institutions to use the digital currency.

While previous pilot projects helped establish the digital yuan payment and settlement system between consumers and commercial banks, it is necessary to expand the scope of e-CNY trials and payment amounts involved in transactions to further test the robustness and security of the ecosystem, said Zheng Lei, deputy head of International New Economic Research Institute.

Expanding the scope of trials can also help fortify the links between commercial banks and the central bank in the context of e-CNY issuance and management of bank reserves, he said.

All these measures will help build a solid ecosystem of the e-CNY that will function as a critical infrastructure of digital finance, Zheng said.

At the end of last year, up to 261 million individual digital renminbi wallets had been set up, with the transaction value totaling 87.57 billion yuan and usage scenarios exceeding 8.09 million, official data showed.