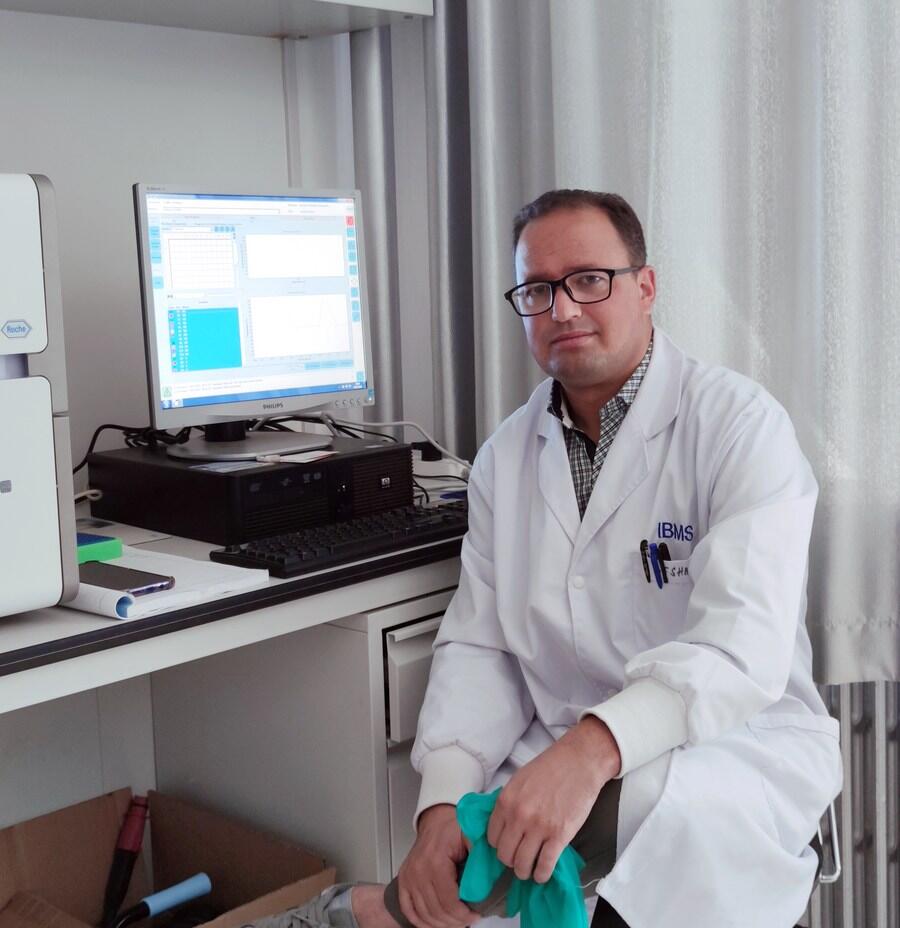 File photo provided by the interviewee shows Pir Tariq Shah, a doctoral student majoring in microbiology at a lab in Shanxi University in Taiyuan, north China's Shanxi Province, on May 21, 2021. (Xinhua)

China's gross domestic product (GDP) exceeded the 110-trillion-yuan (about 17.3 trillion U.S. dollars) threshold in 2021, an increase of 8.1 percent over 2020, according to the government work report.

"As a major economy in the world, China played a crucial role in stabilizing the global economy," he said.

For many foreign students, the Belt and Road Initiative (BRI) is the topic of the most concern during the "two sessions."

The government work report said that China will promote high-quality cooperation under the BRI, remaining committed to the principle of achieving shared growth through consultation and collaboration. Tariq believed that this will boost growth for participating countries.

The Koto Hydropower Project is an example of China's participation in Pakistan's infrastructure construction. With the help of Chinese contractors, the project in Khyber Pakhtunkhwa Province, Pakistan, is nearing completion and is expected to generate clean energy this year.

"China's investment in Pakistan enabled more local people to have jobs and laid a foundation for sustainable development in the future," said Tariq.

Passy Charles Riseph, a student from the Republic of the Congo who majors in Business Management at Shanxi University, was a direct beneficiary of the BRI.

From 2010 to 2014, he worked as a translator in the construction of the Maya-Maya Airport in Brazzaville, also a project undertaken by a Chinese company.

"Our airport had only one floor in the past. While after the construction was completed, it was at one point the most competitive airport in Central Africa," Riseph said.

The experience inspired him to study in China. In 2014, he took off from the new airport and arrived in China for a new adventure.

China is now participating in the construction of the Republic of the Congo's Pointe-Noire Special Economic Zone. Riseph hopes that one day his country can also own a special economic zone as developed as China's Shenzhen.

Tungamirai Eric Mupona, a Zimbabwean student who majors in international affairs and global governance at Zhejiang University, cares more about the topic of rural development.

In recent years, he visited rural areas in Ningxia, Jiangxi, Zhejiang, and other places, hoping to learn from China's poverty alleviation experience and apply it to his hometown.

The government work report mentioned that China will fully consolidate and build on its achievements in poverty elimination by promoting all-round rural vitalization.

"It is of great significance for promoting the continuous income increase of poverty-stricken people and preventing the large-scale return to poverty," Mupona said.

During a week's visit, he found that the local households had moved from earthen caves in the mountains to residential areas with complete living facilities.

Through the development of paper-cutting, millet planting and other industries under the guidance of the government and village cadres, the income of the villagers had been continuously increased.

"China's economic achievement has brought not only opportunities but also confidence to developing countries," said Riseph, who is determined to go back to his country and put his knowledge to use. "I want more compatriots to live better lives in the future."