Ke Jun, general manager of the Jiangsu Performing Arts Group, has long expressed his doubts as to whether traditional Chinese operas might one day become marginalized in today’s society where new forms of entertainment are always emerging. 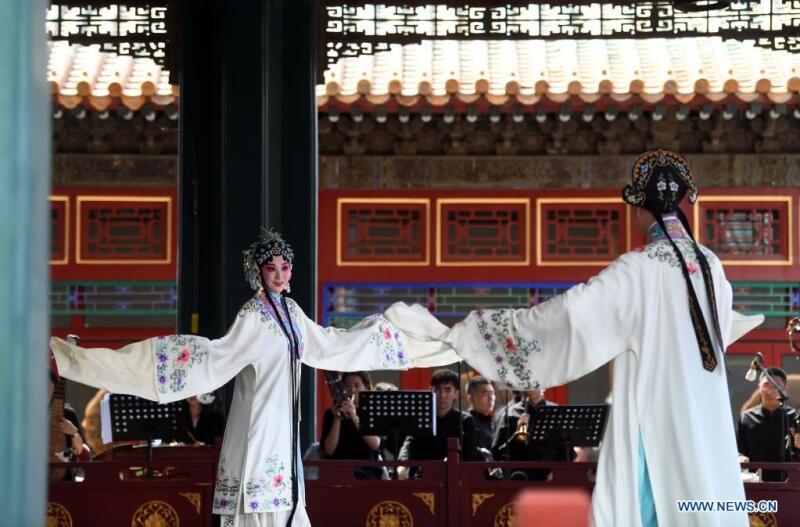 Performers Shao Tianshuai (L) and Wang Chen perform the Kunqu opera masterpiece "The Peony Pavilion" at the Palace Museum in Beijing, capital of China, May 17, 2021. (Photo by Jin Liangkuai/Xinhua)

“Facts proved that the doubt is unfounded, as I’ve seen a revival of traditional operas among the younger generation,” said Ke, who is also a deputy to the National People’s Congress (NPC), as well as chairman of the Jiangsu Theater Association. As a matter of fact, he has discovered that traditional Chinese operas nowadays actually have a strong appeal among an increasingly larger number of young people.

Ke recounted one story about how some young people have helped to create a fresh craze for traditional Chinese operas.

Bian Jingting and Yang Xi, both born after 2000, are two Peking Opera actresses at the Jiangsu Beijing Opera Theatre. After graduating from the Chinese Opera School affiliated to the Shanghai Theatre Academy, Bian and Yang, together with several classmates of theirs, co-founded an all-girl performing troupe that quickly gained popularity, with the group creatively performing Chinese “gufeng” songs in the same style as Peking Opera songs. “Gufeng” music is a particular type of music with lyrical, musical, and symbolic references to ancient China that is often produced, consumed, and circulated within an online fan community.

According to Ke, the reason why the band became popular among young people is that the young performers’ passion for traditional culture has struck a deep chord with young Chinese viewers of their performances.

Statistics showed that in 2021, videos featuring traditional Chinese opera shows were played twice as many times as they had been a year before, while more than 50 percent of these viewers were individuals born after the 1990s and the 2000s. By November 2021, about 98.83 percent of the opera items on China’s intangible cultural heritage list were performed on Douyin, with the videos featuring these shows having been played about 60 billion times in total and garnering 2.2 billion likes on the platform. The top five most viewed and most liked operas on Douyin were Huangmei Opera, Peking Opera, Henan Yu Opera, Yue Opera, and Qinqiang Opera.

Wang Binmei, an NPC deputy and also head of the Zhejiang Xiaobaihua Yue Opera Troupe in east China’s Zhejiang Province, expressed that the operations of opera troupes in the province have been affected by the COVID-19 pandemic for a long period of time. However, the alternative channel offered by Internet platforms has created opportunities for these opera troupes to continue promoting traditional operas. Last year, the Zhejiang Xiaobaihua Yue Opera Troupe presented five performances online, which were watched about 2 million times in all.

After COVID-19 hit, Kunqu Opera theatres in east China’s Jiangsu Province held an online concert on Quanmin K Ge, or Everybody Sing Along, a leading karaoke app backed by Tencent, in April 2020. The concert, which saw the participation of Kunqu Opera performers from different age groups, saw the size of its audience exceed 100,000 viewers at one point during the show.