* The Beijing Winter Paralympics has not only witnessed remarkable feats of para-athletes from around the world but also created a tangible legacy that extends far beyond the sporting arena.

* Sporting success at the Paralympic Games is a reflection of China's efforts to improve the wellbeing of people with disabilities and provide them with opportunities.

A vibrant and heart-warming closing ceremony at the Bird's Nest Stadium in Beijing on Sunday night brought the curtain down on the 2022 Paralympic Winter Games, which has sent out a message of inclusion, resilience and hope to the world during challenging times.

Over the past nine days, the Chinese capital, the first city ever to have hosted both the Summer and Winter Paralympic Games, has not only witnessed remarkable feats of para-athletes from around the world but also created a tangible legacy that extends far beyond the sporting arena.

"Beijing 2008 changed the way the Summer Paralympics was delivered forever, this will be the same with the Winter Paralympics," Parsons said. "A new level of the delivery of these Games was set by Beijing 2022."

Four years after winning its first-ever Winter Paralympic medal in PyeongChang 2018, China dominated at these Games with a haul of 61 medals including 18 golds, a fitting ending for the emblem of the Beijing 2022 Paralympics - "Flying High."

The Chinese wheelchair curling team, who took the historic gold in PyeongChang, defended its title in Beijing by beating Sweden 8-3 in the final after a rocky start to the tournament.

Founded in late 2016, China's Para ice hockey team also made a strong showing as it thrashed PyeongChang bronze medalist South Korea to take the bronze in its Paralympic debut.

On International Women's Day, Chinese athlete Yu Jing became just the third woman in the history to play Para ice hockey at the Winter Games. The 38-year-old forward made her Paralympic debut in China's 6-0 win over Italy on the final day of the preliminary round on March 8. Besides Chinese Paralympians, international athletes have also made breakthroughs in different aspects.

At Sochi 2014, Cecile Hernandez became France's first-ever Para snowboard silver medalist and collected one silver and one bronze at PyeongChang 2018. In 2022, however, she broke two vertebrae in training but made it back to competitions in just two months.

Now at 47 years old, the Frenchwoman finally stood on the highest podium after taking the gold in the women's Para snowboard cross SB-LL2 at Beijing 2022. Since his Paralympic debut at Salt Lake City 2002, Canadian Para cross-country skier Brian Mckeever remained highly competitive over the past 20 years and added three more golds at Beijing 2022 to his rich collection of 13 titles taken from the previous six editions of Winter Paralympics.

With the world still grappling with the COVID-19 pandemic, ensuring the safety of the participants of these Paralympic Games has been a top priority of the Beijing 2022 organizers.

Thanks to strict and effective countermeasures including the closed-loop management system and daily testing, the number of positive cases in the closed-loop has been dynamically dropped to zero during the Winter Paralympics, according to the Beijing 2022 Organizing Committee (BOCOG).

"I think we are very satisfied that we are providing the safe environment to the athletes," Parsons said. "So it's not only about providing them an environment where they don't get the virus, but they feel that they are safe. And I think this is what we are experiencing here." 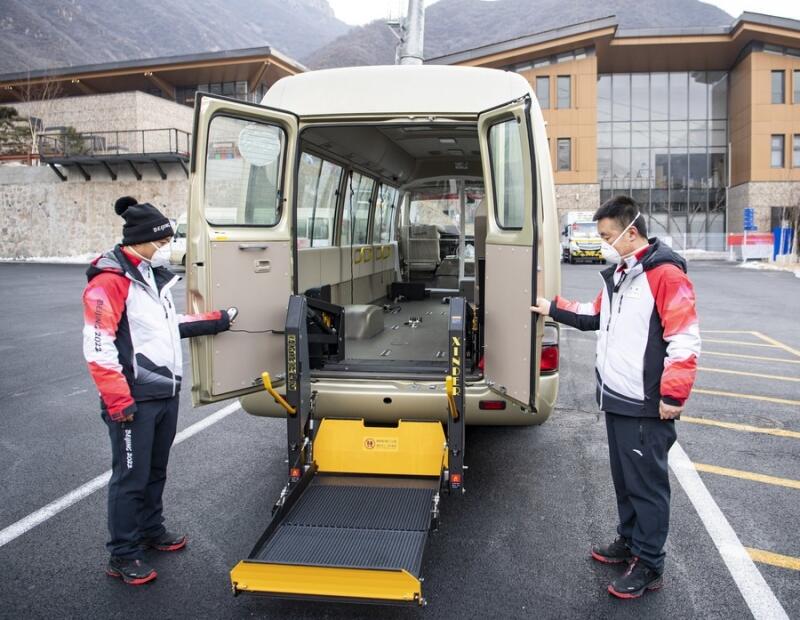 Preceding the 2008 Paralympic Games, wheelchair access was put in place throughout Beijing's subway stations. The infrastructure improvement is no less manifest for 2022.

The National Aquatics Center has installed over 100 meters of ramp; the National Alpine Skiing Center has specially designed cable cars for those with lower limb deficiencies. In addition, 41 hospitals, 18 hotels have been upgraded to improve accessibility.

Parsons has called the Beijing 2022 venues "some of the best winter sport venues in the world," which was echoed by many participating athletes and coaches.

"When it comes to accessibility and [being] barrier-free, I think the athletes can speak even better than I can," Parsons said. "Our accessibility experts are very happy about that. So far I did not receive any complaint, which is always a good sign."

"The facilities are perfect. Everything is good and acceptable. We have big rooms and big bedrooms. They have special bedrooms for athletes with wheelchairs," said Dutch coach Nicky Elsewaerd.

American Paralympic ice hockey athlete Kyle Zych said he felt grateful for the barrier-free facilities installed ahead of the Beijing 2022 Paralympic Winter Games. "We're so lucky to experience such an amazing village and venue."

DEVELOPING CAUSE OF PEOPLE WITH DISABILITIES

For China, hosting the Paralympics is not just about raising awareness about people with disabilities, it is also about making real material changes that are the basis of a more civilized society.

"The Chinese government has always supported the integration of people with disabilities into society. Programs for persons with disabilities have seen a comprehensive development, including Para sports," said BOCOG vice president Yang Shu'an.

According to BOCOG, China has organized winter sports events for people with disabilities since 2016 and the number of participants has increased from some 10,000 people to more than 300,000 per season. "In a country with 85 million persons with disability, this is absolutely fundamental," Parson commented.

"There are many girls in China who would like to join the sport and there are already many who play it. I am the representative of these female players in this team. I got the chance to play for the national team and be on this stage to show the power of our Chinese women to the world," said Yu.

If nothing else, the increased emphasis China puts on its para-athletes, of which the Beijing Winter Paralympics is just a facet, is a reflection of China's human rights progress.