China has maintained the world's largest manufacturing hub for 12 straight years, said the Ministry of Industry and Information Technology (MIIT).

The country's value-added output of the manufacturing sector in 2021 reached 31.4 trillion yuan (about $4.97 trillion), accounting for 27.4 percent of its GDP. A technician debugs a robotic arm at a workshop of a carmaker in Qingzhou, east China's Shandong province, on March 1, 2022.

China is the only country in the world that has all the industrial categories listed in the UN industrial classification and is the world's largest producer of over 220 types of industrial products.

Last year, the added value of industries above the designated size increased by 9.6 percent over the previous year, with an average growth of 6.1 percent in the two years.

The innovation capability of China's manufacturing sector has been significantly enhanced. The photovoltaic, wind power and ship-making industries are seeing increasing international influence. The production of containers surged by 110.6 percent, and that of chips also jumped by 33.3 percent. Besides, the country has also made phased achievements in the new display, machine tool, and new material sectors.

The structural optimization of the manufacturing sector is accelerating. The output of the high-tech manufacturing industry went up 18.2 percent year on year, while that of equipment manufacturing increased 12.9 percent. They have contributed 28.6 percent and 45 percent to the growth of industries above the designated size, respectively. 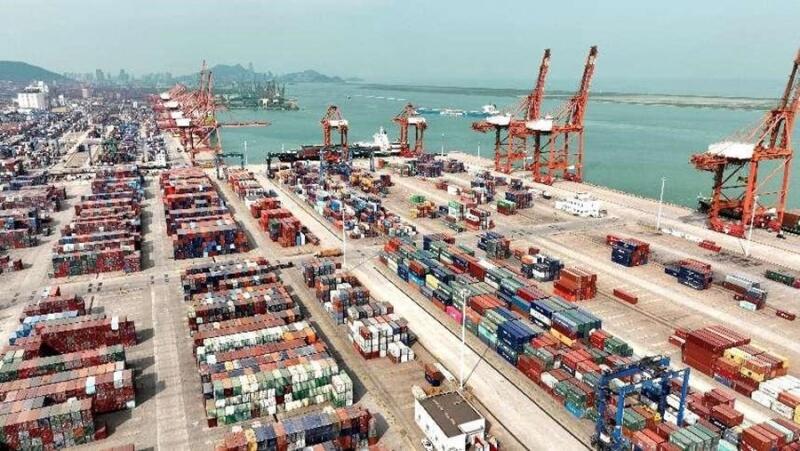 The energy consumption per unit of value-added output of industries above the designated size decreased by 5.6 percent from a year ago.

Digital transformation of the manufacturing sector has speeded up. China has built the world's largest fiber-optic and mobile communication networks. It is home to over 1.425 million 5G base stations and 520 million connected 5G terminals.

The numerical control rate of key processes in Chinese enterprises reached 55.3 percent and the penetration rate of digital R&D and design tools came in at 74.7 percent.

He said China is the only country in the world that has all the industries classified into 31 divisions, 207 groups, and 666 classes, and it has offered firm support for the country's industrial and economic development. The MIIT will expand its investment in the manufacturing sector and keep a stable ratio of the sector in the country's industry, he added. Wind turbines are loaded onto an ocean-going ship at a terminal in Lianyungang, east China's Jiangsu province, Dec. 31, 2021.

The manufacturing sector consists of numerous SMEs and features an ecology in which large, medium, and small enterprises are interdependent and mutually reinforcing, he said, adding that China must make efforts to further protect and nurture the ecology.

Xiao said China will further expand the group of "little giants," or leading small and medium enterprises that specialize in niche sectors, and pave newer paths of development for these enterprises at the national level. This year, the country plans to nurture over 3,000 national-level and 50,000 provincial-level "little giants," Xiao noted.

He said leading small and medium enterprises that specialize in niche sectors have set an example for the development of SMEs, hoping that their development can bring further inspiration to other SMEs.