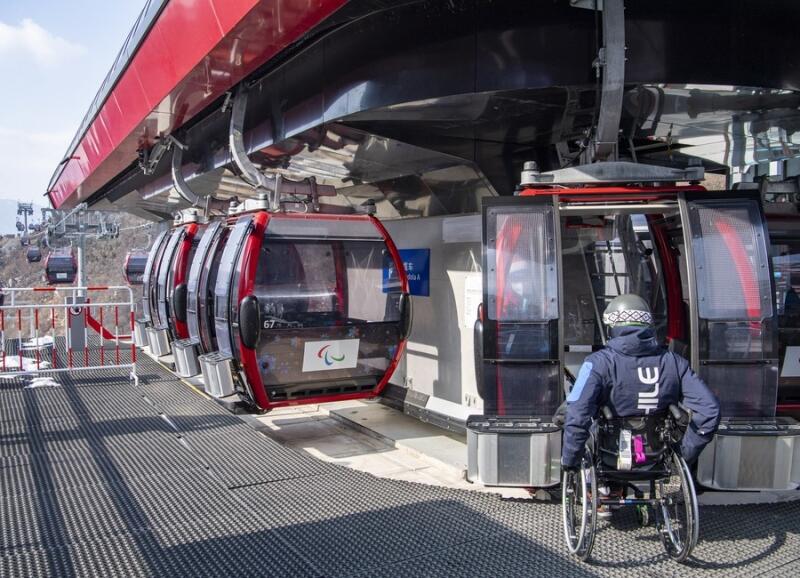 Zhao Chen, a UNICEF youth advocate, was unable to return to Beijing this winter due to the COVID-19 pandemic, but he has been paying close attention to the development of disability inclusion in China, which has been further spurred by the Beijing 2022 Paralympic Winter Games.

Currently pursuing higher education in the United States, Zhao completed his elementary and secondary schooling in Beijing. The young man is visually impaired, losing most of his eyesight at the age of 10 due to retinal detachment and other ailments.

He said as long as people with disabilities can be proficient in using screen reading software and other assistance devices, they are able to acquire knowledge just like him in normal schools.

"I went through a tough time after losing my eyesight at the age of 10. Thanks to my parents and psychology teacher, I was able to face life with optimism," he said.

In 2008, the year Beijing hosted the Summer Olympics and Paralympics, Zhao moved to the Chinese capital to attend an elementary school.

"The Games accelerated the building of barrier-free facilities in the city, making it easier and safer for people with disabilities to move around alone," Zhao said.

He has vivid memories of his middle school life. He was quite involved in extracurricular activities which included the school choir, radio station and literature club, where he made many friends, discovered new hobbies and reclaimed his confidence.

"It is the development of digital technology and networking platforms in China that has enabled disabled people like me to actively access information, rather than passively learning about the world through traditional means of radio and television," Zhao said.

In the main media center for the Beijing 2022 Winter Paralympics, an LED screen connected with an intelligent platform shows visitors how to find barrier-free routes in the venue. Facilities such as barrier-free ramps, elevators, toilets, seats and dining tables bring convenience to people with disabilities, which are expected to be further expanded for public use after the event.

"We need an inclusive society, where the needs of people with disabilities could be better understood, and everyone can have equal access to social life. This is my aspiration and also our common goal," said Zhao, who was appointed as a youth advocate in 2021 by UNICEF China.

In October 2021, the Standing Committee of the National People's Congress, China's top legislature, adopted a decision on ratifying the Marrakesh Treaty to Facilitate Access to Published Works for Persons Who Are Blind, Visually Impaired or Otherwise Print Disabled.

The treaty that will take effect in China this May is expected to make it easier for people with visual impairments to obtain specially adapted books.

"The implementation of the treaty can further help the visually impaired in gaining access to electronic copyright of books, music scores and other published works, allowing us to experience in this vibrant world much more easily with the help of screen reading software," Zhao said.