Longjing Tea & Brunch | Why must we keep a closer eye on the cryptocurrency wild boom across the globe? 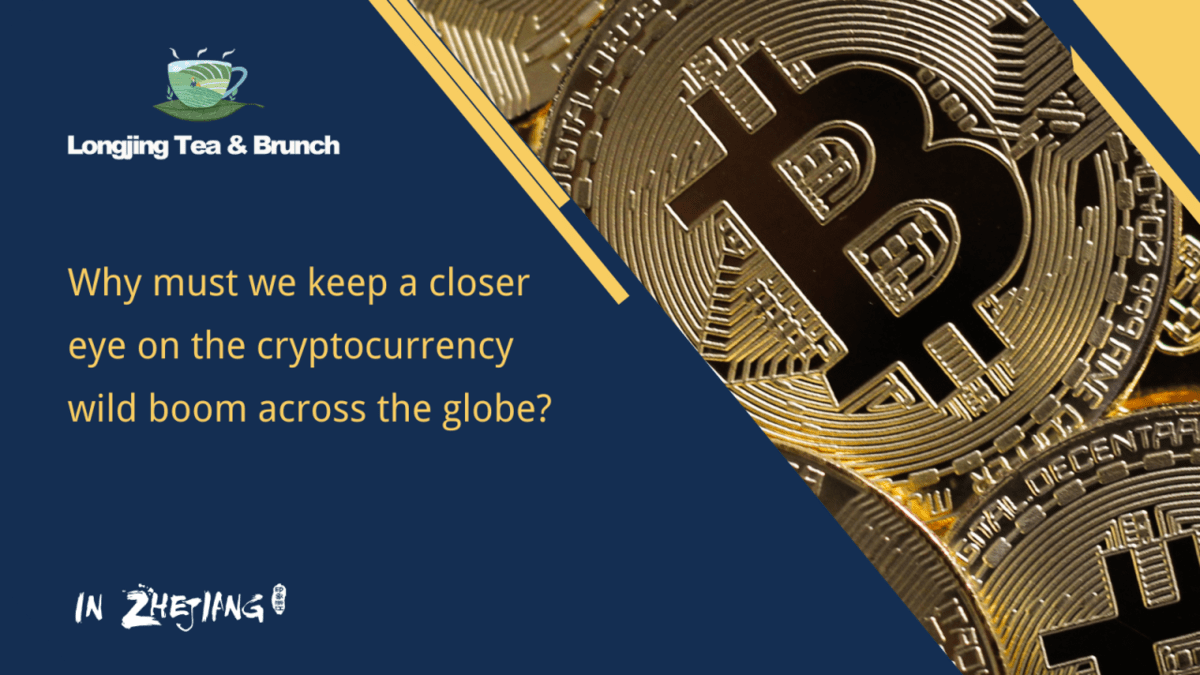 If you might have searched the keyword "cryptocurrency" on the search engine Google, there could have been hundreds of millions of results coming along the way.

According to the investment and market monitoring site "Visual Capitalist", every day, approximately 12 billion US dollars are transferred across the Bitcoin, Ethereum, and Litecoin blockchains, with millions of people using cryptocurrency for payments daily. Or more recently, the uncertainties of the COVID-19 pandemic may have driven more investors in this space—especially the ultra-loose monetary policy response by central banks.

Proponents of cryptocurrency tend to use the rhetoric claims cryptocurrency are a democratizing force, wresting the power of control from the central banks and Wall Street, or even more eloquently, the "money for the Information Age". Critics, however, see this type of new technology and investment scenario as a kind of unregulated financial activity that will highly empower criminal acts, terrorist organizations, and rogue communities.

More countries have said "NO" to cryptocurrency

In recent years, cryptocurrency has received more high-profile criticism around the world. A few global financial watchdogs have sent clear alarming messages to the world, indicating a more “urgent” action to contain crypto risks. According to Finantial Times, the Financial Stability Board, which makes recommendations to the G20 nations on financial rules, said in February, that policymakers must act quickly in crafting rules covering the digital asset market, given the tightening link with the traditional financial system.

In September 2021, China's central bank has announced that all transactions of crypto-currencies are illegal, further fending off financial risks and forestalling speculation in virtual currency businesses.

Open source shows that other far-sighted countries including Egypt, Iraq, Qatar, Oman, Morocco, Algeria, Tunisia, and Bangladesh have also carried out an absolute ban on cryptocurrency and 42 countries have applied an implicit ban. China, for example, is especially concerned about crypto mining’s effect on the environment and people using digital currencies for fraud and money laundering.

The environmental impact of cryptocurrency mining

The Cambridge Bitcoin Electricity Consumption Index shows that Bitcoin, the most widely-mined cryptocurrency network, uses 122.87 Terawatt-hours of electricity every year—more than the Netherlands, Argentina, or the United Arab Emirates. Another analytics firm Digiconomist indicates that Bitcoin mining generates about 96 million tons of carbon dioxide emissions each year, which is equal to the amounts generated by some smaller countries.

Cryptocurrency crimes on the rise

Cryptocurrency analytics website Chainalysis indicates that cryptocurrency-based crime hit a new all-time high in 2021, with illicit addresses receiving $14 billion over the course of the year, up from $7.8 billion in 2020.

Among all the cryptocurrency crimes, money laundering is one of the most popular options for criminals. Criminal actors will exploit the anonymity of the blockchain to launder gains from both off-chain and on-chain crimes to obfuscate the sources of illicit funds and convert them into cash for bank deposits.

Crypto-anarchism, as the hand behind the cryptocurrency, is a type of anarchism that claims that cryptographically protected anonymization technologies, digital pseudonyms, and digital money are used to circumvent state control - surveillance, censorship, and taxation.

However, disregarding the law is tempting when you give up self-governance and send yourself to the evils. Chaos contains serious social and economic consequences.

Orchestration of public-private partnership on cyber literacy education is urgent

The Internet is a public sphere shared by everyone and it is a collective intelligence project constructed by all Internet users. However, the capitalization and monopolization of the Internet have led to such a state quo that, we have failed at making virtual spaces safe and educating users about the risks. Throughout the world, we can see those criminal cartels, terrorists and opportunists are working overtime to take advantage of the geopolitical and financial superiority that they could never have attained in the analogue world.

In the future, global partnerships between the public and private sectors must orchestrate to work on the popularization of cyber literacy to users to ensure that order prevails in cyberspace.

(The author is a columnist for "In Zhejiang" and the opinions in the article are not necessarily those of "In Zhejiang".)