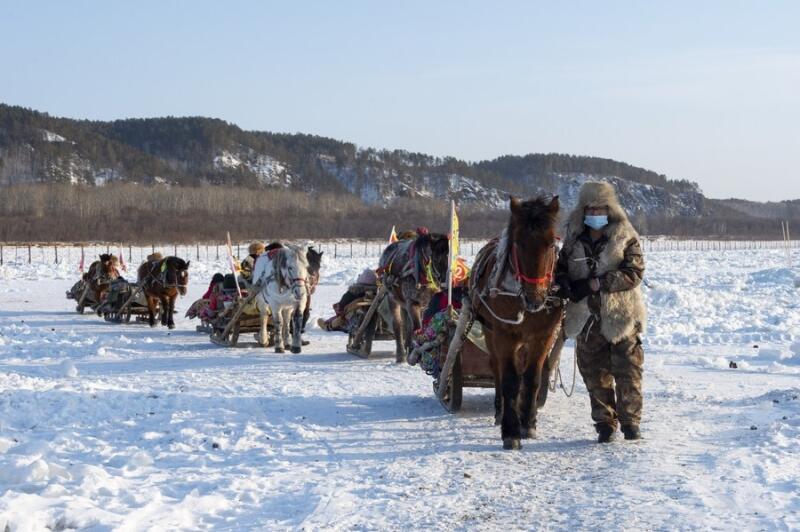 Winter is traditionally the off season for farming in northeast China, as the region easily sees freezing temperatures and severe weathers. Local farmers stay idle almost the whole winter.

However, Li Guofu, a farmer from Beisanjiazi Village in Jilin Province, is having a rather busy time these days serving guests at a ski field he has run for several ski seasons.

The 100,000-sq-m venue receives around 200 skiers every day during the peak season. Li hires more than 30 fellow villagers to help maintain the operation.

Li Qianyu, who himself likes to ski, has worked as a ski instructor for four years. "We work here three months every winter. It's good to have this opportunity to earn some extra money," he said.

Ice and snow sports have brought about sweeping changes to the lives of local farmers. Li Zhongshan, who works as a safety patroller at the ski field, said he can earn at least 10,000 yuan (about 1,574 U.S. dollars) from this temporary job.

The ongoing Beijing Winter Olympics has spurred the enthusiasm for skiing this winter and the field is swarming with visitors. The number of visitors has easily surpassed 1,000 each day since early February, and the opening hour of the ski field has been extended into the evening, Li Guofu said.

Known as the coldest place in China, the border city of Mohe in neighboring Heilongjiang Province has also seen an increasing number of tourists in recent years due to the booming ice-snow tourism.

Beiji Village is an unmissable destination in Mohe, as it is home to China's northernmost post office. It also has many homestays, offering tourists a pleasant outing.

"We have organized activities such as skiing and curling at the homestay to create a sporting ambience for the ongoing Olympics," said Shi Ruijuan, a local villager, who has been running a homestay for over a decade. Two snowmen featuring Bing Dwen Dwen and Shuey Rhon Rhon, mascots of Beijing 2022, have been built in the homestay, wonderfully complementing the joyful atmosphere.

There are over 300 homestays and more than 100 restaurants in the village, Shi said, adding that the local economy is gaining steam because of the ice and snow tourism.