Photo taken on Feb. 4, 2022 shows an illuminated Ski Jumper Figure flying over the Olympic Rings in ice during the opening ceremony of the Beijing 2022 Olympic Winter Games at the National Stadium in Beijing, capital of China. (Xinhua/Xiong Qi)

Lao President Thongloun Sisoulith believes that China has given full play to the advantages of its comprehensive national strength, overcome the difficulties of the pandemic and successfully completed all preparatory work on schedule.

The ongoing Beijing Winter Olympics have become an arena where sportsmanship shines and opportunities are created to promote the pursuit of a community with a shared future for mankind.

Having gone to great lengths to overcome the impact of COVID-19 and fulfill its promise to the international community, China managed to host the grand event as scheduled, allowing Beijing to be the first "dual Olympic city," which also hosted the 2008 Summer Olympics.

The Olympic flame lit again here illuminated China's dedication and hard work. Committed to hosting the Winter Games in a "green, inclusive, open and clean" approach, the organizers have carefully planned every detail for a simple, safe and splendid event. 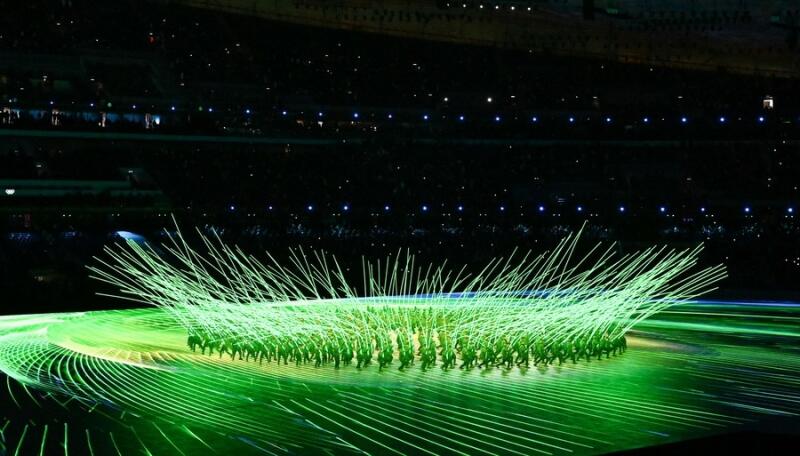 Artists perform during the opening ceremony of the Beijing 2022 Olympic Winter Games at the National Stadium in Beijing, capital of China, Feb. 4, 2022. (Xinhua/Du Yu)

Lao President Thongloun Sisoulith believes that China has given full play to the advantages of its comprehensive national strength, overcome the difficulties of the pandemic and successfully completed all preparatory work on schedule.

Nepali President Bidya Devi Bhandari has said that facing the unprecedented challenges posed by COVID-19, the Chinese government has fully demonstrated its firm resolution and confidence in hosting the Beijing Olympic Games.

Another message delivered through the Games is the common pursuit of a shared future. The Olympics is about sportsmanship, as well as unity -- which is particularly needed in today's world.

While holding the Games in the face of adversity, China has practiced the new Olympic motto, "Faster, Higher, Stronger -- Together." At the opening ceremony on Friday, a giant snowflake with the Olympic flame at its center, clearly demonstrates the ideal of a shared future, and the Olympic spirit, which requires mutual understanding with a spirit of friendship, solidarity and fair play.

"Doesn't matter (whether there are) political interests, religions, no borders, we are human beings. And through the Olympics, through Olympic ideals, we bring everyone together," Sergey Bubka, president of Ukraine's National Olympic Committee, recently said. The audience react during the women's ice hockey preliminary round Group A match between Canada and Switzerland at National Indoor Stadium in Beijing, China, Feb. 3, 2022. (Xinhua/Li Ziheng)

Furthermore, the Beijing 2022 has been the first international sports festival that came at the appointed time since the onset of COVID-19, thus boosting the confidence of the world in prevailing over the virus.

The Beijing Organizing Committee for the 2022 Olympic and Paralympic Winter Games has deployed a series of prevention and control measures to ensure a safe Games. And athletes have been encouraged to be fully vaccinated while all events will take place within a closed loop to reduce the threat of mass contagion.

"We can see the closed loop is working. The Chinese people are safe, and the participants of the Games are safe," said Thomas Bach, president of the International Olympic Committee.

"Unfortunately, the global pandemic is still a reality for all of us. Therefore, our gratitude is even deeper for the Beijing 2022 Organizing Committee, the public authorities and all the Chinese people. Thank you for making these Olympic Winter Games happen -- and making them happen in a safe way for everyone," said Bach during the opening.

In a letter to Chinese President Xi Jinping recently, Victoria Woodards, mayor of Tacoma City in the U.S. state of Washington, said with the 2022 Winter Olympics taking place against the backdrop of the COVID-19 pandemic, it is fortunate for the whole world to have a responsible host country with great organizational capacity like China to hold a safe, healthy and successful Winter Olympics.

Spring is the golden time to plant seeds of hope. The Games that started at the "Beginning of Spring" -- the first solar term on the Chinese Lunar Calendar, and gathered about 2,900 athletes of different ethnics and cultures, can surely help ignite new hope for the world to go "Together for a Shared Future."