Consumption has a bigger role in driving growth with incentive policies: analysts 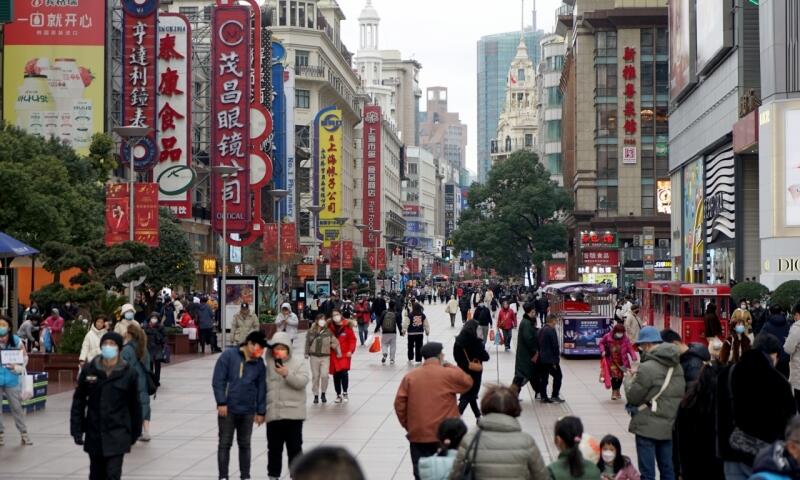 The Spring Festival holiday, the first week-long holiday of the year in China, always serves as a barometer of consumption for the year. Under the COVID-19 flare-up in some cities, the 2022 Spring Festival holiday consumption revealed a complicated economic landscape - slight contraction offline but strong growth online, including robust ice and snow tourism powered by the Beijing 2022 Winter Olympic Games.

Despite pressure on overall consumption, analysts remained confident in China's consumption pointing to incentive policies already in place, noting that consumption will continue to contribute more to economic growth in 2022, together with more investment, which will offset any possible decline in foreign trade, given the uncertain pandemic situation worldwide.

During the first five days of the 2022 Spring Festival holiday, from January 31 to Friday, online payment platforms processed 6.236 billion cross-institution online payment transactions, up by 5.3 percent compared with the same period in 2021, worth 4.20 trillion yuan ($660.3 billion), up 11.58 percent, according to NetsUnion Clearing Corporation, the clearinghouse platform backed by the People's Bank of China.

As of 7 pm on Sunday, the total box office of new films during the 2022 Spring Festival topped 6 billion yuan. In the first four days of the holiday, the box office was 3.53 billion yuan, down 22.4 percent from 2021, but 3.8 percent higher than in 2019, according to film data platform Maoyan.

But data from online film ticket platform Dengta showed that the average ticket price for Spring Festival in 2022 was about 20 percent higher than the pre-pandemic levels, which means the number of moviegoers may be lower than pre-pandemic levels.

The year 2022 marks the third year that people are suggested to stay put during Chinese New Year holiday in an effort to reduce massive migrations during chunyun - the Spring Festival travel rush - to aid epidemic control.

More local travel therefore was conducted during the holiday. About 82 percent of tourists choose to visit local scenic spots, according to a report online travel platform Trip.com.

But the Beijing 2022 Winter Olympic Games have boosted snow and ice tourism in China.

As of Saturday, bookings for ski-themed hotels during the Spring Festival holiday were up 54 percent year-on-year, and ticket orders for snow, ice and ski resorts were up nearly 40 percent, according to Trip.com.

On Feizhu, Alibaba Group's online travel booking platform, bookings for snow and ice tourism-related products during the Spring Festival increased by more than 30 percent compared with 2021.

The combination of skiing and hot springs has become a new way for young people to unlock ice and snow tourism. Feizhu saw orders of the "snow and ice plus hot spring" category increased by more than 40 percent year-on-year.

The momentum of the Winter Olympics is also shown in ice and snow sports.

From January 31 to Wednesday, sales of skiing equipment on online e-commerce platform Tmall increased by more than 180 percent compared with 2021, and the growth of ice sports related products was more than 300 percent.

More than one million buyers flooded the official Tmall store of the Olympic on Friday, after the opening ceremony of Beijing 2022. The panda mascot Bing Dwen Dwen were sold out overnight, according to a report sent from Tmall.

The annual Central Economic Work Conference held on December 10, 2021 cautioned that China's economic development is facing pressure from a contraction in demand, supply shocks and weakening expectations, and the external environment is becoming increasingly complicated, grim and uncertain.

But the key economic meeting also stated that China must face difficulties squarely while staying confident due to the strong economic resilience and unchanged fundamentals underpinning long-term growth of China.

Analysts said that the central and local governments have successively introduced policies to promote consumption.

The National Development and Reform Commission (NDRC), China's top economic planner, said recently that it is necessary to put in place measures and act early. In the first quarter of 2022, China faces many uncertainties.

According to NDRC, China will improve the service quality of rural tourism, and special home stay facilities, and enrich the supply of tourism products for surrounding areas, outings, and snow and ice travel. It will promote the integration of consumption of goods and services, and expand new types of consumption such as information and green consumption. The country will move faster to integrate county and rural e-commerce systems and express delivery systems.

In fact, e-commerce has already boosted sales of rural products during the Spring Festival. On Taobao, sales of sausages, duck eggs, buffalo milk and other agricultural products increased by more than 100 percent year-on-year.

With integrated and efficient logistics, fresh products from all over the world go across the continents to celebrate the Chinese New Year. Canadian arctic shells, Atlantic bread crab, Ecuadorian white shrimp and other food have been added to the New Year's Eve dishes, according to Taobao.

"Keeping consumption stable is of great significance to keeping growth stable, as in 2021, consumption contributed 65.4 percent to economic growth, making it the biggest driver of growth," said Hu.

"China's domestic demand growth still has considerable potential. After the Winter Olympics and the two sessions in the first quarter, consumer demand will be released as the epidemic control gradually returns to normal. Residents' incomes have indeed risen, which will boost expenditure," Tian said.

Tian also said that prices are soaring, which is a sign of growing demand. And the GDP growth in 2022 is likely to remain above 5 percent.