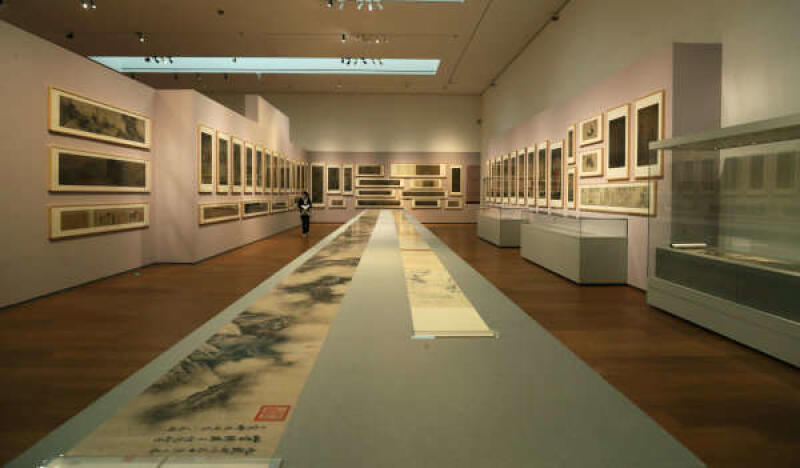 A corner of the exhibition featuring "The Series of Ancient Chinese Paintings" held in the Zhejiang University campus in November 2021. (Photo/zj.zjol.com.cn)

In November 2021, coloured prints of some 500 ancient Chinese paintings went on display at an exhibition in the Zhejiang University campus in Hangzhou, Zhejiang province.

The exhibition presented some of the achievements of a 16-year national cultural project, one in which Zhejiang art historians established digital archives for 12,250 ancient Chinese paintings from the period spanning the Zhou Dynasty (1046 BC-256 BC) to the late Qing Dynasty (1644-1912).

The culture project was conducted in cooperation with some 260 culture and exposition institutions across the world, including the British Museum, Staatliche Museen Zu Berlin and the Museum of Fine Arts Boston. It featured the most comprehensive collection of images of ancient Chinese paintings in the world.

In 2005, Zhejiang University and Zhejiang Cultural Heritage Administration sought assistance from the provincial government to publish a complete set of Song Dynasty (960-1279) paintings by utilizing the collections of both the Taipei Palace Museum in Taiwan and the Palace Museum in Beijing. The project won support from governments at both the provincial and the national levels and was renamed "The Series of Ancient Chinese Paintings" to include the masterpieces handed down from all imperial dynasties.

The works in the project were mostly shot by a team of professional photographers. The majority of the digital archives of the paintings boast outstanding image accuracy and print quality.

As 3,250 of the 12,250 paintings are kept overseas, the project team had to travel around the world and contact numerous museums to digitize the works.

It was not a coincidence that Hangzhou-based institutes had initiated this ambitious project. A corner of the exhibition featuring "The Series of Ancient Chinese Paintings" held in the Zhejiang University campus in November 2021. (Photo/zj.zjol.com.cn)

"Hangzhou was the capital of the Southern Song Dynasty and had witnessed its extremely prosperous culture. It is our duty to apply the latest research findings and the most advanced printing technologies into publishing a complete, quality collection of Song Dynasty paintings, meeting the urgent needs of artists, academics, and the general public at home and abroad," said a person in charge of the cultural project.

The Song Dynasty is widely regarded as the golden era for ancient Chinese paintings as the works then boasted diverse themes and painting techniques, masterly skills, and elegant aesthetics that were all unrivalled in any other period.

The Complete Set of Song Dynasty Paintings was published in 2008. Afterwards, the complete sets of paintings of Yuan (1271-1368), Ming (1368-1644), Qing, and many other dynasties were respectively published, forming a panoramic view of ancient Chinese paintings over two millennia.

When stacked upon one another, these books form a pile that is around four stories high.

The culture project is still unfinished as many paintings in the hands of private collectors and foreign museums have not yet been included. Some of the included paintings still require further research, while some murals, sculptures, architectures that are closely associated with ancient paintings will be included in the digital archives as well.

Zhejiang University has gifted books related to "The Series of Ancient Chinese Paintings" to numerous culture institutes including National Library of China, Palace Museum, Taipei Palace Museum, and a number of university libraries at home and abroad.

Wen Fong (1930-2018), an eminent art historian at Princeton University, once remarked that the series of books will greatly enhance the general public's knowledge about imagery art and contribute to the rejuvenation of Chinese culture.

"Up to this day, not a single country in the world, except China, has managed to comb through all the paintings throughout its history. How lucky I am to engage in such a meaningful culture project in my life!" said Jin Xiaoming, deputy director of Ancient Chinese Calligraphy and Painting Research Center at Zhejiang University.