Rural tourism, which is gaining increasing popularity in China, has not only offered people great options to spend holidays and enriched their choices for short-distance trips and day trips, but also become a key force for driving consumption at county and township levels and the recovery of the country’s tourism market. Last year, rural tourism in China witnessed a significant increase in the proportion of young people born after 1990 and 2000 in its group of tourists, with the number of post-2000s travelers rising 17 percent year on year, suggested data from online Chinese travel agency LY.com.

In provincial-level regions including Beijing, Shanghai, Jiangsu, Zhejiang, and Guangdong, mini-vacations in the countryside on weekends have become an important choice for urban residents, according to LY.com.

“It feels great to get away from the city noises and enjoy the primitive simplicity of the village with my child,” said Li Tang, a tourist from Chaoyang district, Beijing, who took a short-distance tour to Cuandixia village, an ancient village in Zhaitang township, Mentougou district of Beijing. 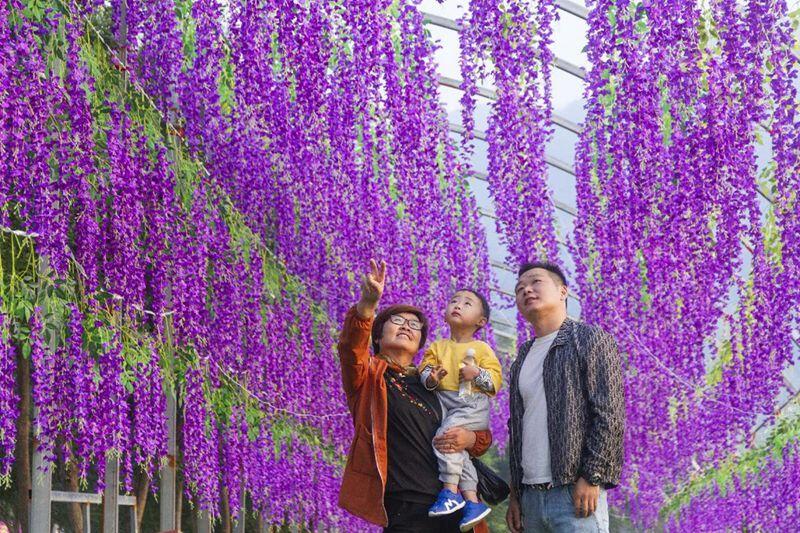 Based on its distinctive style and features, Cuandixia village has specially designed ancient village-themed sightseeing routes, offering both fun and meaningful experience to tourists, Li said.

The local government is making efforts to seek better use of idle houses to develop high-quality B&B hotel business, according to Jin Weihua, mayor of Zhaitang township. After walking down the main road of the village, which has well-designed green belt on one side and neatly-arranged restaurants of various styles on the other, tourists can see a row of globular white tents surrounded by green trees. They are the “rooms” of the popular local B&B hotel that offer tourists a good view of the starry sky at night.

Customers need to make reservations many days in advance to get one, according to a staff member of the hotel.

“Eight years ago, I wouldn’t believe it if someone told me our village would become so beautiful one day,” said Tan Jie, secretary of the Communist Party of China (CPC) general branch of Sanhe village, while looking at the unsurfaced roads of the village in photos taken in 2013 before the village was transformed.

From an ordinary little village into a well-known tourist destination, Sanhe has made great efforts to develop rural tourism, according to Tan.

The village has sorted out and integrated 63 sites with resources of the distinctive local ecosystem featuring the organic integration of rural residences and surrounding trees, bamboo groves, rivers, farmland and other elements of the natural environment, and introduced 24 music-themed cultural and creative projects as well as five high-quality B&B businesses.

By holding activities such as music festivals and concerts of folk songs and folk music, the village attracts more than 200,000 visitors a year, who bring to the village over 30 million yuan ($4.7 million) in consumption growth.

Thanks to its great advantages in the market, industrial vitality, and important role in driving the development of related industries, rural tourism has achieved notable results in boosting employment, improving living environment, stimulating digital transformation, and improving infrastructure in villages across the country. Meanwhile, the prosperity of rural tourism can motivate young people working in urban areas to return to their hometowns to start their own businesses or find a new job near their homes, thus boosting the development of rural economy and solving the problem of “hollow village”, according to Wu.